Cop shoots suspect ‘who attempted to escape from custody’

Hong Kong, China–In stark contrast to Beijing’s triumphant display of military might marking the 70th anniversary of the founding of the People’s Republic of China, Hong Kong on Tuesday was engulfed in running street battles between riot police and protesters.

An 18-year-old demonstrator was shot by police at point-blank range in the chest and remained in critical condition. At least 30 others were being hospitalised.

Over the past 16 weeks, Hong Kong has been rocked by anti-government protests, triggered by opposition to a now-shelved bill that would have allowed the extradition of accused individuals to mainland China for trial.

The demonstrations have since morphed into a broader pro-democracy movement, with protesters expanding their demands to include an independent inquiry into alleged police brutality; a blanket amnesty for all those charged with offences stemming from their involvement in demonstrations; and a retraction of the police claim that protesters are guilty of rioting – a charge that carries a heavy prison sentence.

Protesters are also calling for the right to directly elect Hong Kong’s top leader and all the legislators. 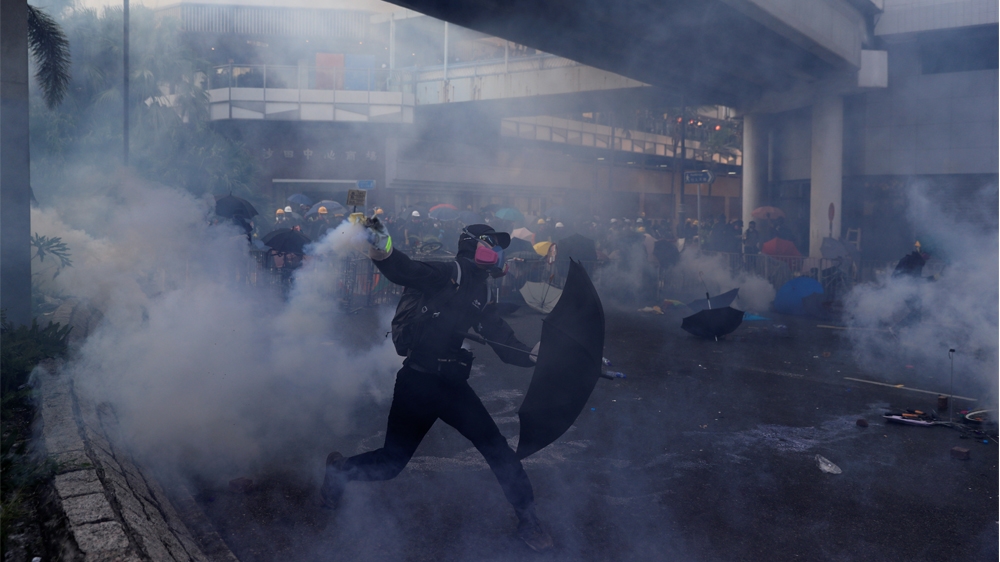 Over the past 16 weeks, Hong Kong has been in the throes of anti-government protests [Jorge Silva/Reuters]

On Tuesday, mindful of the importance of the milestone anniversary to Beijing, demonstrators directed their anger squarely at mainland China-owned businesses in different parts of the city.

Protesters vandalised a Bank of China branch, spray-painted slogans such as “Topple the Commies” and “Communist China, go to hell,” while also torching the Chinese national flag. They also draped from a footbridge black banners inked with protest slogans, befitting the traditional Chinese funeral rite. City streets, meanwhile, were strewn with “banknotes for the netherworld”.

Rot police meanwhile shot crowds of protesters with volley after volley of tear gas bombs and occasional beanbag rounds. A smattering of protesters hit back with Molotov cocktails, but most huddled behind a patchwork shield of umbrellas in self-defence.

Referring to the shooting of the protesters, police officials defended it as “reasonable and lawful,” saying the officer felt threatened after being surrounded by protesters.

Repeated police bans on major marches downtown may have depressed turnout, but protests have only grown in scope and ferocity.

At least several thousand protesters pm Tuesday defied a police ban on a proposed march through the city centre, making their way towards Beijing’s representative office just 2km (1.2 miles) west of downtown – only to be pushed back by police using water cannon.

“I shall persist till I succeed,” said Ash Chen, 44, a former civil servant who now works in finance. “But I can’t see the end game as the government is unlikely to meet all our demands.”

Rebranding Tuesday’s anniversary as their “national day of mourning,” Hong Kong’s demonstrators were bent on spoiling the party and stealing the show from Beijing.

A former British colony, Hong Kong was returned to China in 1997 under a “one country, two systems” framework, which guarantees Hong Kong people rights and freedoms largely absent in mainland China.

In recent years, critics say Beijing has increasingly interfered in the supposedly semi-autonomous territory, and resentments have bubbled to the surface. Beijing denies interference and has warned other countries to stay out of Hong Kong’s affairs.

More than 1,000 people dead in Mediterranean so far this year

Shots fired at anti-CAA protest in the New Delhi; one injured

Eid-ul-Azha on July 31 in Saudi Arabia