Hong Kong, China– Prominent pro-democracy activists were rounded up early on Friday ahead of a planned mass rally as authorities moved to quell weeks of sometimes violent demonstrations against Beijing’s control over the semi-autonomous territory.

Joshua Wong andAgnes Chow, both leaders of Demosisto Party, were held at police headquarters and charged with unlawfully organising a public meeting in June. They were freed after paying $1,200 in bail and their case will go before a court in November.

Like millions of other protesters, Wong has called on the Hong Kong government to scrap a controversial extradition bill, which sparked the ongoing protests in the Chinese territory.

Andy Chan, an independence activist, was arrested at Hong Kong’s international airport on Thursday as he attempted to fly to Japan.

“We shall not surrender,” Wong said after being released. “We urge international communities to send a message to President Xi [Jinping] – sending troops and emergency order is not the way out. We will continue our fight.”

Saturday’s planned rally – aimed squarely at Beijing’s decision five years ago to the day to foreclose on free-and-fair elections – especially unnerved local officials and compelled them to act, analysts said.

“Hong Kong police are acting on Beijing’s orders,” said Ching Cheong, a Hong Kong-based commentator on Chinese politics, to Al Jazeera. “The arrests sure won’t suppress the unrest, but the Chinese Communist Party has its own logic.”

But Hong Kong authorities denied the seven arrests had anything to do with Saturday’s planned demonstration.

“We arrest a person as soon as we get sufficient evidence to prove his or her offence. The allegation that we time our arrests is totally false,” a police spokesman told a news conference on Friday.

Since early June, protests over the extradition bill, which opponents believe will enable the Chinese authorities to circumvent their promises to preserve the territory’s separate justice system, have morphed into a broader pro-democracy movement.

The demonstrators have also agitated for full democracy with the ability to elect the government’s top leader, as promised in the Sino-British Joint Declaration signed in 1984.

A former British colony, Hong Kong was returned to China in 1997 under the “one country, two systems” framework, which guaranteed Hong Kong people rights and freedoms absent in mainland China.

The protest movement has been largely leaderless, mostly coordinated online through Telegram and Reddit-like forums with established civic groups acting only as intermediaries seeking permission to gather from the police.

Any march involving more than 30 people or a gathering of 50 or more people must be approved by authorities.

Saturday marks the fifth anniversary of Beijing’s rejection of a call for universal suffrage in the financial hub, a decision that sparked the 79-day mass sit-in Umbrella Movement in 2014, led mainly by young protesters including Chow and Wong.

Wong, 22, was freed in June after serving time for leading the 2014 protests. The morning after his release he joined an all-day siege of the police headquarters along with thousands of other protesters. Police accused him of inciting and attending the unlawful gathering.

“The arrests are premeditated moves to divide and rule. We call on the government to face public opinion instead of carrying on with the terror campaign,” Issac Cheng, a deputy at Demosisto, which was formed in 2015 in the wake of the Umbrella Movement, told Al Jazeera.

More than 850 people have been arrested in connection with the recent protests.

“It goes to show how the police and the government totally misjudge how the people get mobilised. And now they’re casting the dragnet ever wider to include those who are well known,” said Eddie Chu, a legislator who was present at the siege and who tried to defuse the situation.

“There’s fear they still hold sway and control the crowd. The arrests are utterly pointless and can even backfire.” 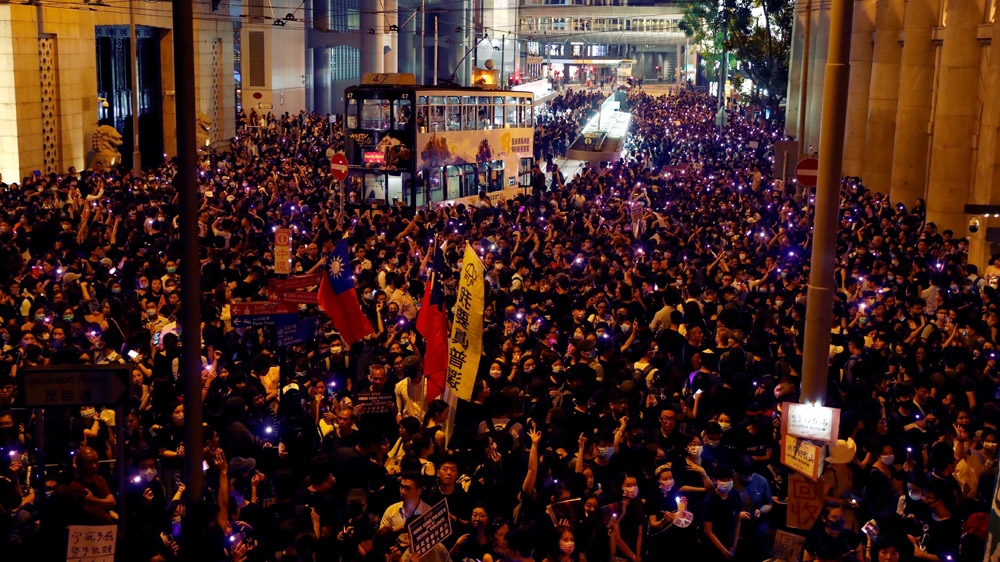 Both Chow and Wong work as assistants to legislator Au Nok-hin of the pan-democratic camp of the Legislative Council.

“Their arrests are unreasonable and arbitrary and smack of political persecution,” said Au.

Police issued an objection to the mass rally and march for Saturday on security grounds, raising the likelihood of another weekend of clashes between security forces and protesters, who are likely to come out in defiance of the ban.

This is also the last weekend before school starts. High school and university students, in particular, have been at the forefront of the movement. Some are planning to boycott their classes.

Chu, the legislator, said the arrests were ill-advised as a way of stemming the protests, but he can see why the government made such a move.

“The government is running out of options,” said Chu.

Steve Tsang, from the School of Oriental and African Studies, said he was concerned that Bejing was preparing to deploy security forces to crack down on any demonstrations over the weekend.

An editorial in the state-run China Daily newspaper said on Friday that Chinese soldiers have “no reason to sit on their hands” if “the already ugly situation worsens”.

Zalmi Gilgit-Baltistan Girls Football League will be held from 13 to 17 Sep.

President Trump says US may seek damages from China over virus