Hong Kong’s metro stations and roads re-opened on Monday, after a chaotic weekend that saw police fire water cannon, tear gas and rubber bullets at protesters who set fires and threw petrol bombs outside government offices and across central districts.

Residents of the former British colony awoke to roads, shop fronts and buildings across the financial centre daubed in graffiti, windows in government buildings smashed and parts of pavements uprooted by protesters.

Most shops, restaurants and cafes stretching from the main Central business district to the bustling tourist area of Causeway Bay closed early on Sunday as police and demonstrators faced off in sometimes violent clashes into the night.

The Chinese territory remains on edge ahead of the 70th anniversary of the founding of the People’s Republic on October 1, with authorities eager to avoid scenes that could embarrass the central government in Beijing and activists planning mass protests.

In some of the worst and most widespread violence in more than three months of anti-government unrest, demonstrators marked the fifth anniversary on Saturday of the start of the “Umbrella” protests, a series of pro-democracy rallies that ultimately failed to wrestle concessions from Beijing. 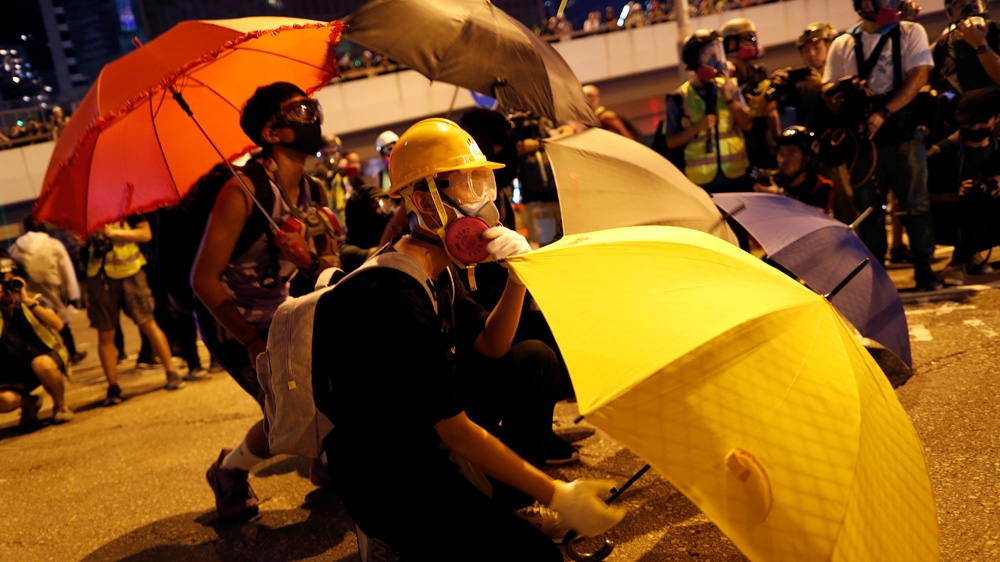 A protester shelters behind an umbrella during a rally on Saturday. Protests began in June over an extradition bill, but have morphed into a broader call for more democracy. [Jorge Silva/Reuters]

The city’s leader, Carrie Lam, the focus of the unrest, is set to leave for Beijing on Monday to celebrate the anniversary. Lam had sent out invitations “requesting the pleasure of your company” at a flag-raising ceremony and National Day reception at the Convention and Exhibition Centre in Wan Chai on Tuesday.

It was not immediately clear why she had the change of heart but the government said Chief Secretary for Administration Matthew Cheung Kin-chung would stand in for her.

A series of strikes is planned on Monday as well as multiple demonstrations across the city on Tuesday.

Protesters are angry about what they see as creeping interference by Beijing in their city’s affairs despite a promise of autonomy when British rule ended in 1997.

The trigger for the protests was planned legislation, now withdrawn, that would have allowed people to be sent to mainland China for trial, despite Hong Kong having its own much-respected independent judiciary.

The protests have since broadened into calls for universal suffrage and an investigation into allegations of policy brutality.

Police said in a statement on Monday that an officer had to fire a warning shot for his unit’s own safety after they were “surrounded and attacked by a large group of violent protesters” on Sunday.

By early morning on Monday all MTR metro stations on the city’s main island were open as normal and stores had re-opened.

Delhi, Blanketed in Toxic Haze, ‘Has Become a Gas Chamber’