Hong Kong– Seizing every opportunity to air their dissent for the world to see, demonstrators turned a football stadium into a protest zone on Tuesday night at the first home game of Hong Kong’s World Cup 2022 qualifying campaign.

An hour before the 8pm (1200GMT) kick-off against Asia’s top side Iran, spectators made their uphill journey to the stadium while chanting “Fight for freedom, stand with Hong Kong”.

Many of them traded their signature black T-shirts, a protest uniform of sorts, for red jerseys, belting out “Glory be to thee, Hong Kong”, a stirring song crowd-composed online that, over the past two weeks, has emerged as a battle hymn and protest anthem.

When China’s national anthem was played inside the stadium, the protesters heckled and turned their back towards the ground.

“I’m here to support the Hong Kong team and the Hong Kongers,” said Brian Kwok, 28. “More people than usual have turned out for this weekday game and come together for camaraderie.”

The mass protests, now entering their fourth month, were sparked by a now-scrapped extradition bill, which opponents argued would have allowed Beijing to erode Hong Kong’s separate justice system after its return from British to Chinese rule in 1997.

The demonstrations have since morphed into a broader pro-democracy movement.

Protesters are widening their demands to include full democracy, an independent inquiry into alleged police brutality, a blanket amnesty for all those charged with offences stemming from their involvement in demonstrations, and a refutation of the police claim that protesters were guilty of rioting – an offence that carries a heavy prison sentence.

At half-time in the qualifier, spectators waved their phones and shouted protest slogans in unison, holding out five fingers to represent their demands for the government.

The protesters had earlier appealed to the G20 for support during its summit in June and marched to the US consulate to push for intervention last weekend.

“This is the chance for us to express our demands,” said Marvelous Chan, 36, holding a protest flyer handed to her. 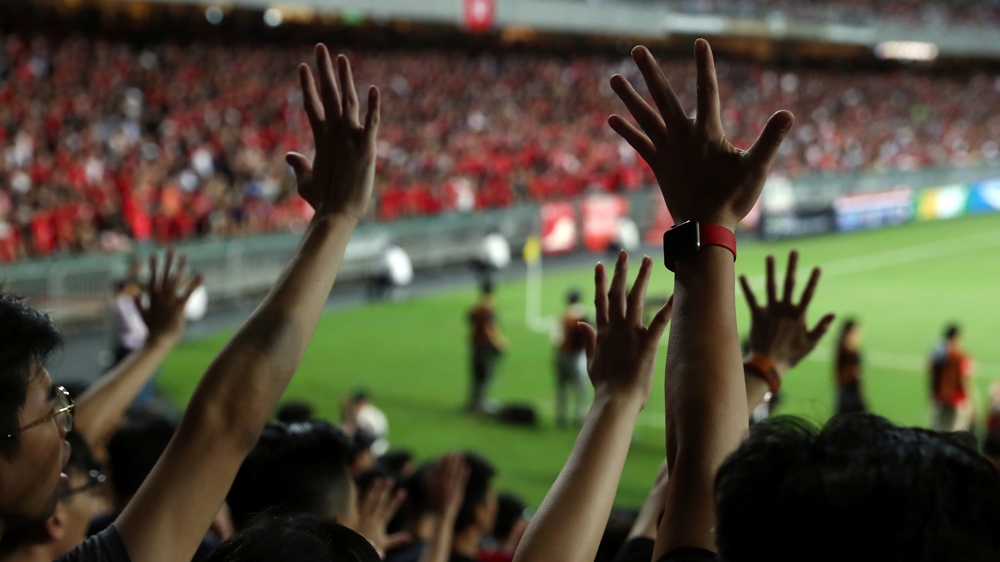 Since 2015, a few months after the pro-democracy mass sit-in Umbrella Movement ended, football fans have become active demonstrators at matches. They have booed China’s national anthem, including at the game where Hong Kong faced off against China in their last World Cup qualifier.

This defiance has attracted a few fines from FIFA for the Hong Kong Football Association.

For some demonstrators, their protest echoed the lyrics of the anthem “March of the Volunteers” which begins with “Rise up, you people who refuse to be subjugated”.

Beijing enacted a national anthem law in 2017 and entered it as an amendment to Hong Kong’s constitution, requiring it be promulgated by the territory’s Legislative Council.

The legislation was to sail through in July 2019 but a siege of the council by protesters postponed it until October.

Once enacted, the new law would punish anyone who “publicly and intentionally insults” the national anthem with up to three years in prison and a maximum fine of $6,410.

Pro-democracy activists and politicians fear the law could be used to undermine freedom of speech.

It also wades into untested waters as this is Beijing’s first effort at requiring Hong Kong to pass a mainland Chinese law, smacking of a breach of “one country, two systems”.

However, as this is not yet the law of their land, the spectators booed away with no fear of penalty, except likely another fine from FIFA.

In Pictures: The world in the past 24 hours

US to send Mexican asylum seekers to Guatemala under new plan