The leader of the Lebanese Hezbollah movement Hassan Nasrallah has said two Israeli drones that fell over the southern suburbs of Beirut were on a “suicide mission” and said Hezbollah will do what it takes to prevent Israel from sending more drones to Beirut.

“Hezbollah will not allow such an aggression,” he said in a televised address on Sunday. “The time when Israeli aircraft come and bombard parts of Lebanon is over.”

Nasrallah’sspeech came hours after a drone crashed in the Lebanese capital.

A second drone exploded in the air, Lebanese authorities said.

“The new aggression … constitutes a threat to regional stability and an attempt to push the situation towards further tension,” Hariri said on Sunday in a statement from his office.

The Israeli military said it does not comment on “foreign reports”.

Nasrallah said that his movement would do anything to prevent such incidents from occurring again.

“From now on, we will down any Israeli drones in Lebanon’s skies,” he said.

The Hezbollah leader said the “latest Israeli development is very, very, very dangerous” and that the overnight drone attacks were intended for a specific target in the Hezbollah-dominated Dahyeh suburb in Beirut.

He said it was the first clear dangerous breach of rules of engagement since the two sides fought a month-long war in 2006.

Earlier, a Hezbollah spokesperson said that a small, unmanned reconnaissance drone fell on the roof of a building that was housing Hezbollah’s media office in the Moawwad neighbourhood in Dahyeh.

A second drone, Mohammed Afif said, which appeared to have been sent by Israel to search for the first drone 45 minutes later, exploded in the air and crashed nearby. 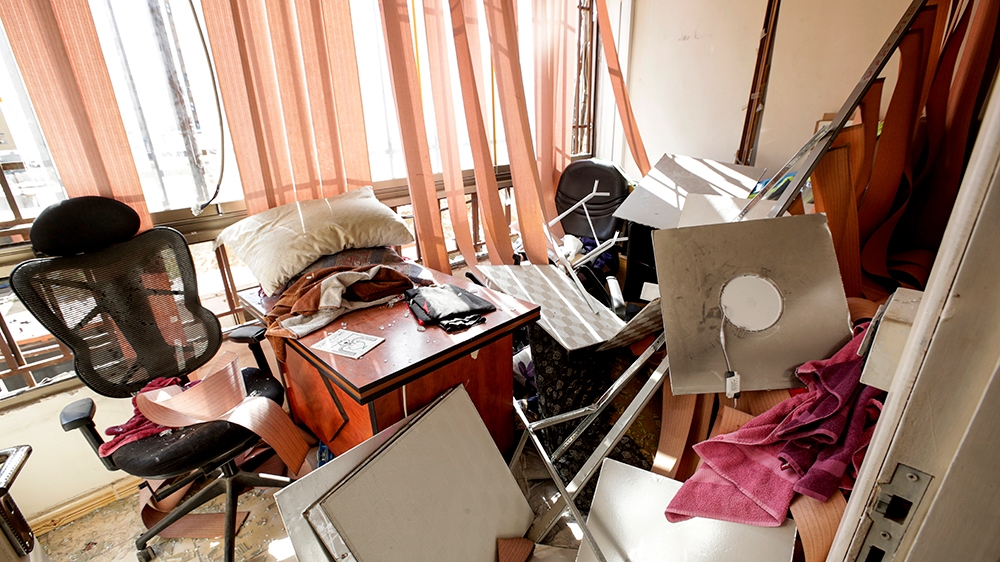 “We did not shoot down or explode any of the drones,” Afif told The Associated Press news agency.

‘Israel did not attack Quds Force’

Late on Saturday, the Israeli military attacked targets near Syria’s capital Damascus in what it said was a successful effort to thwart an imminent Iranian drone attack on Israel.

A senior Revolutionary Guards commander denied that Iranian targets had been hit and said its military “advisory centres have not been harmed”, the semi-official ILNA news agency reported

The Israeli military said its aircraft struck “Iranian Quds Force operatives and Shiite militias which were preparing to advance attack plans targeting sites in Israel from within Syria over the last number of days”. The elite Quds Force is the overseas arm of Iran’s Revolutionary Guards (IRGC).

In a rare acknowledgement of member deaths in Syria in Israeli air raids, Nasrallah confirmed that two members of Hezbollah were killed in the attack in the Aqrabah area, but denied that the raid targeted Iran’s Quds force.

“Israel did not attack [Iranian] Quds force position in Syria but rather a house containing Hezbollah fighters”, he said.

“If Israel kills any of our brothers in Syria, we will respond to this killing in Lebanon,” he added.

Addressing the Israeli army, Nasrallah said that Hezbollah will respond imminently, and are determined to defend not just their southern border with Israel but their skies and sea as well.

Iran’s Zarif arrives for surprise G7 talks, no plan to meet US

China warns demonstrators it will act on ‘uncontrollable’ unrest