An extended gun battle between security forces and drug cartel gunmen raged late into the night on Thursday on the streets of the capital of Mexico’s western Sinaloa state, after a failed police operation to capture one of the sons of jailed drug kingpin Joaquin “El Chapo” Guzman.

Durazo said the decision to release him was taken to protect lives.

TV network Milenio earlier reported that the shootout was triggered by the arrest of Ovidio Guzman, one of  El Chapo’s sons who have assumed control of part of the cartel since their father was extradited to the United States in 2017.

Earlier on Thursday, sustained, heavy gunfire rocked the city of 750,000 people in a battle that left blazing vehicles strewn across the street and sent terrified residents running for shelter, according to AFP journalists at the scene.

President Andres Manuel Lopez Obrador said in a brief comment to journalists that his security cabinet was holding a meeting and would give details on the situation later.

Sources in the Sinaloa state government speaking on condition of anonymity said police officers had been wounded, but did not have a detailed toll.

They also said an unknown number of inmates had escaped from the Aguaruto prison in Culiacan amid the chaos.

The state government said in a statement that it was “working to restore calm and order in the face of the high-impact incidents that have occurred in recent hours in various points around Culiacan.”

It called on residents to “remain calm, stay off the streets and be very attentive to official advisories on the evolving situation.” 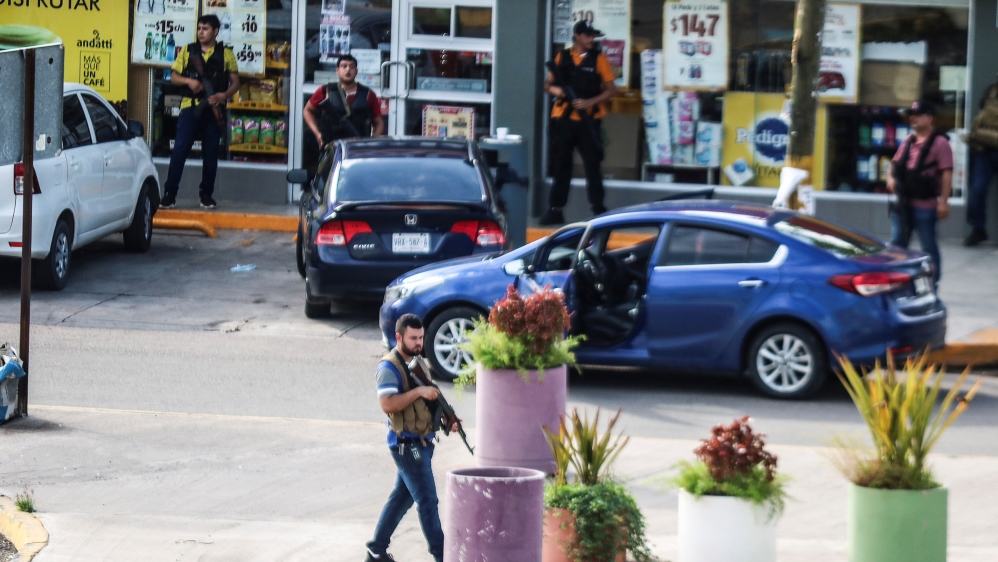 The battle broke out in the afternoon near the state prosecutor’s office, when masked gunmen blocked traffic and opened fire, causing panicked drivers to abandon their cars in the middle of the street.

The fighting then spread to several other parts of the city.

Gunmen blocked roads and highways around the city into the evening, bringing the capital to a standstill.

Al Jazeera’s Manuel Rapalo, reporting from Mexico City, said that fighting in the streets of the Sinaloan capital “seems like images out of a film”.

El Chapo, 62, was sentenced to life in prison in July for trafficking hundreds of tons of cocaine, heroin, methamphetamine and marijuana into the United States over the course of a quarter-century.

However, his Sinaloa cartel remains one of the most powerful in Mexico.

Guzman’s extradition unleashed an initial period of instability in the group, as his sons waged war with cartel co-founder, Ismael “El Mayo” Zambada, for control, leaving a trail of bodies in their wake.

But the situation has since stabilised into a reluctant truce.

El Chapo, whose nickname means “Shorty,” was rearrested in 2016 after a brazen prison escape – the second of his career.

He is considered the most powerful drug lord since Colombia’s Pablo Escobar, who was killed in a police shootout in 1993.

After being convicted in a New York court, he is now serving his sentence in the ADX federal maximum security prison in Colorado.

Ovidio and his brother Alfredo have tried to fill their father’s shoes, but anti-narcotics experts portray them as flashy party boys who have little ability to run the business side of the cartel.

Known as “Los Chapitos,” or The Little Chapos, the pair were attacked in 2016 in a restaurant in the beach town of Puerto Vallarta.

They survived the attack, which the authorities called an attempted hit by rivals.

India does not ‘ combat ‘ militant organizations but Pakistan does ‘ little ‘: #Trump claims