Senate polls: ECP rolls out code of conduct for smooth…

“I would like to inform everyone that I will execute everything you trusted in me [to do],” Rajapaksa said at the results announcement, flanked by his brother Mahinda, a former two-time president. “Especially, at this moment, I happily say that I will carry out all that is in my manifesto during my tenure.”

Rajapaksa, a former defence secretary during Mahinda’s 10 years in power, based his campaign for Saturday’s election on providing strong leadership on national security issues, following coordinated bombings in April that killed 269 people.

His campaign was also backed by Sinhala Buddhist monks who have called for greater controls to be placed on the island’s roughly 10 percent Muslim population following those attacks.

Rajapaksa secured victory with 52.25 percent of the vote, according to final results announced by Sri Lanka’s Election Commission, more than the 50 percent margin needed to ensure a runoff was not required.

“As we usher in a new journey for Sri Lanka, we must remember that all Sri Lankans are part of this journey,” Rajapaksa said in a Twitter post.

“Let us rejoice peacefully with dignity and discipline in the same manner in which we campaigned.” 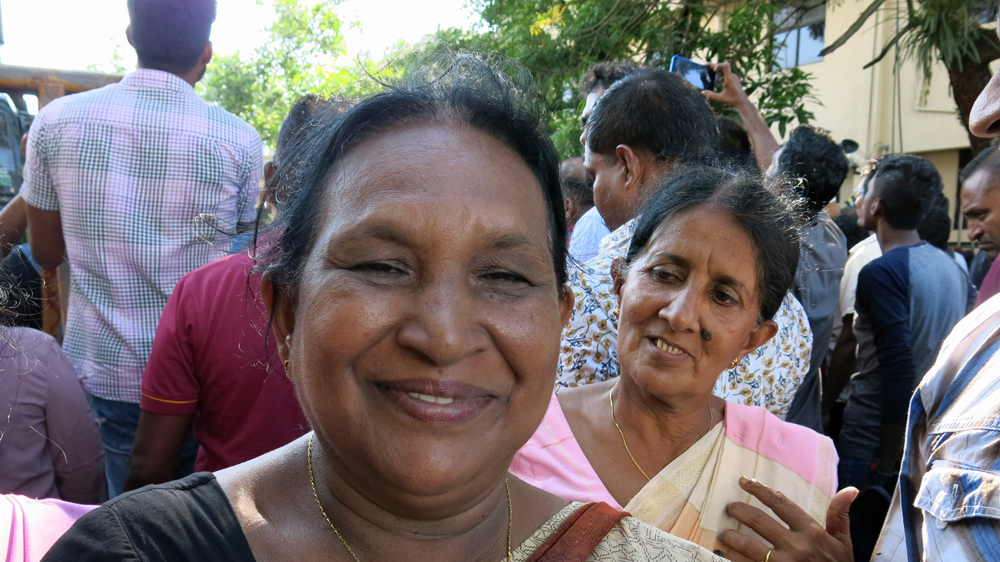 Thilaka Rohini, 62, a Rajapaksa supporter, said she was ‘very happy’ to see the president-elect win, and wanted to see his brother made prime minister [Asad Hashim/Al Jazeera]

“At the conclusion of a hard-fought and spirited election campaign, it is my privilege to honour the decision of the people and congratulate Mr Gotabaya Rajapaksa on his election as the seventh president of Sri Lanka,” he said.

Rajapaksa will take oath as president on Monday at a ceremony in the central town of Anuradhapura, an ancient Sinhala Buddhist heritage site located about 160km (100 miles) north of Colombo.

Keheliya Rambukwella, a spokesman for Rajapaksa’s Sri Lanka Podujana Peramuna (SLPP) party, said national security is Rajapaksa’s “primary concern”, along with the revival of the economy.

Rights groups have long called for investigations into alleged rights abuses committed during the Rajapaksas’ previous terms in power, including the United Nations’ allegations that more than 40,000 people were killed by security forces in the final days of the country’s civil war in the north, as Tamil rebels took shelter among civilians.

Rajapaksa’s campaign stressed on his credentials as the defence secretary that brought a close to that war, while also calling for an overhaul of economic policies implemented by Premadasa’s UNP during its five years in charge of parliament.

The Rajapaksas’ previous stint in power also saw widespread allegations of a crackdown on dissent, with rights activists and journalists subjected to enforced disappearances. 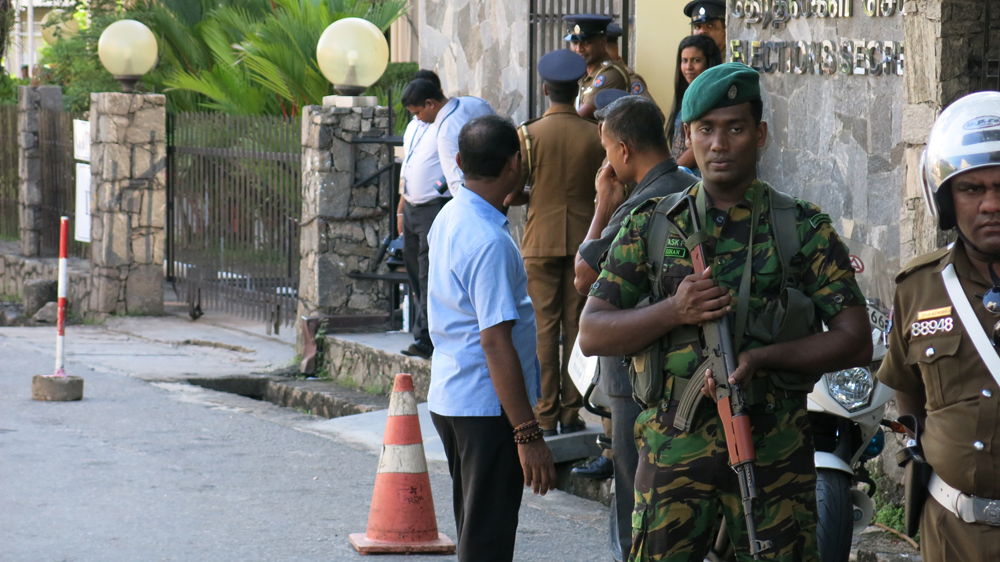 “Many people’s lives are in danger now,” she said. “His government will jail people by filing different charges against activists, will disrupt major investigations such as my husband’s case [and journalist] Lasantha [Wickrematunge’s] murder.”

The Rajapaksas deny any wrongdoing during their previous terms in office.

Outside the Election Commission on Sunday, scores of SLPP supporters waved flags and raised a roar of approval when Rajapaksa appeared after the official results were announced to the candidates.

“These people ruled for four and a half years, but they did not do anything that the people can see,” said Thilaka Rohini, 62, a Rajapaksa supporter who had come to cheer on the president-elect.

Rajapaksa has said he will name his brother Mahinda prime minister in his government. Sri Lanka operates a semi-presidential form of government, where the president, prime minister and cabinet share executive authority.

Current Prime Minister Ranil Wickremesinghe, chief of Premadasa’s UNP, has not indicated whether he will resign following his party’s defeat. At least three cabinet ministers resigned from their posts on Sunday.

As things stand, the UNP will remain in control of Parliament until at least February, when the president can constitutionally dissolve the body ahead of a general election. Alternately,Parliament can vote to dissolve itself, prompting a snap election.

On Sunday, Mahinda Rajapaksa announced his party was examining proposals to repeal the 19th amendment to the Sri Lankan constitution, which introduced greater checks on the president’s powers and transferred some of that authority to the Parliament. 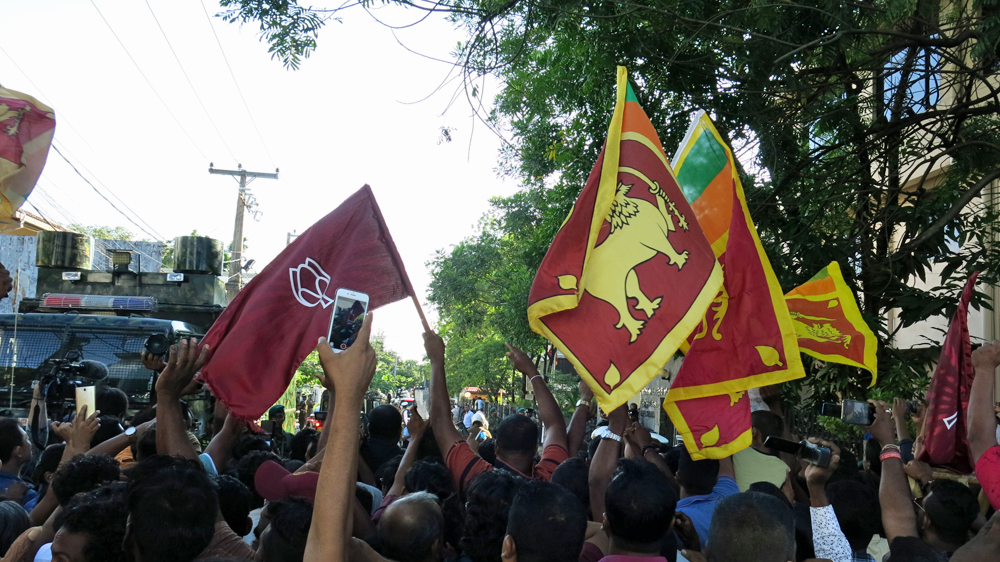 “The first thing that will happen is the prime minister will [likely] offer his resignation and Mahinda Rajapaksa will be sworn in,” he told Al Jazeera.

In the north of the country, where Premadasa swept polls in areas dominated by the country’s roughly 15 percent Tamil minority, the vote was seen with concern, analysts said. Tamil voters have long indicated a preference against the Rajapaksas, mainly because of the rights abuse allegations from the final days of the war.

“This election, in particular, it was not so much a vote for Sajith Premadasa, it was more of a protest vote against Gotabaya Rajapaksa,” said Ahilan Kadirgamar, senior lecturer at the University of Jaffna.

Kadirgamar said a high turnout number even in areas that had traditionally eschewed the polls “reflects how the north has come into the national mainstream in terms of participating in national electoral politics”.

He warned, however, the fact that the poll still went to Rajapaksa, buoyed by his strong support from Sinhala Buddhist areas, could further polarise Sri Lanka.

“There are forces both in the south [Sinhalese areas] and the north [primarily Tamil areas] who thrive on polarisation and divisive politics, on keeping communities divided… This election provides an opportunity for both forms of ideologically polarising forces in the country.”

The scene at the UNP headquarters in the Sirikotha area of Colombo was a far cry from the loud slogans and fireworks that greeted a victorious Gotabaya Rajapaksa outside theElection Commission.

“If he [Premadasa] had won, there wouldn’t even be space for us to stand here,” said a caretaker, laughing.

Inside, a metal bust of Ranasinghe Premadasa, Sajith’s father, a former president who was assassinated in 1993 by Tamil rebels, looked out upon an empty auditorium.

Asad Hashim is a digital correspondent with Al Jazeera. He tweets @AsadHashim 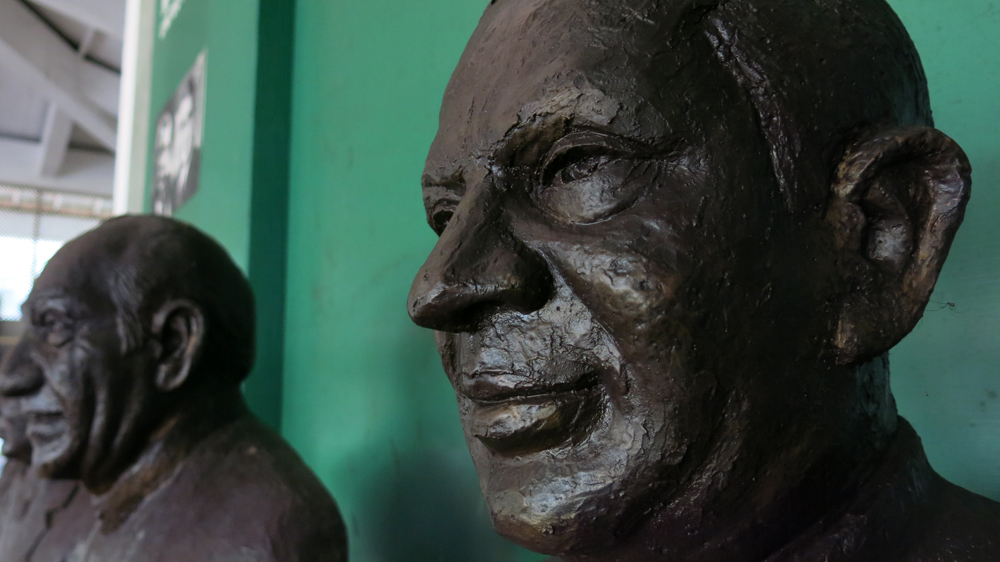 A metal bust of Ranasinghe Premadasa, Sajith’s father, who was assassinated while in office as president in 1993 [Asad Hashim/Al Jazeera]
previous post

In Pictures: New Year celebrations around the world

Turkey deports US national as it starts returning ISIL fighters