Iran was responsible for the attacks on two Saudi oil facilities earlier this month, the leaders of the United Kingdom, France and Germany have said in a joint statement, drawing a sharp response from a senior Iranian military official.

The leaders issued the statement on Monday as British Prime Minister Boris Johnson hinted that the UK may withdraw from the Iran nuclear deal, as US President Donald Trump has done last year.

All three countries are signatories to the 2015 Joint Comprehensive Plan of Action (JCPOA) – commonly referred to as the “nuclear deal” – between Iran and world powers, which had offered Iran relief from global sanctions in exchange for imposing limitations on its nuclear programme.

The September 14 drone attacks, which were claimed by the Houthi rebels in Yemen, have elevated tensions in the region.

Johnson met with French President Emmanuel Macron and German Chancellor Angela Merkel on Monday, on the sidelines of the annual United Nations General Assembly, to coordinate their strategy on Iran.

“It is clear for us that Iran bears responsibility for this attack. There is no other plausible explanation,” the three leaders said in the joint statement released by France.

Pledging to work to ease tensions in the Middle East, the three urged Iran to “refrain from choosing provocation and escalation”.

Zarif also said Yemen’s Houthi rebels “have every reason to retaliate” for the Saudi-led coalition’s aerial attacks on their country.

He went on to stress that “it would be stupid for Iran to engage in such activity”so close to Iranian President Hassan Rouhani’s visit to the UN.

On Monday, Johnson had also suggested the UK would consider taking part in a US-led military effort to bolster Saudi Arabia’s defences in the Gulf – a move Tehran considers a provocation.

“We have repeatedly told the enemy that if there is any violation toward this country, they will face the same action that took place with the American drone and the English tanker,” he was quoted by Tasnim news agency as saying. 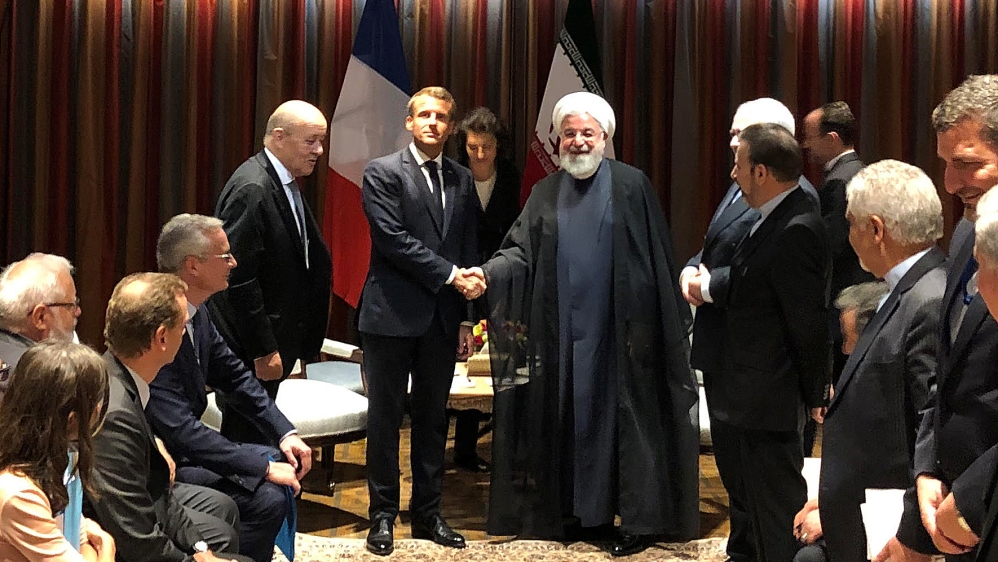 Hillary Mann Leverett, a former White House and US Department ofState  official, told Al Jazeera that the European leaders are “jumping the gun” and have failed to present proof of their allegations.

“There is no proof. The French, the British and the Germans are not even waiting for a UN or international investigation, which the Saudis have themselves called for.”

Leverett said the conclusion drawn by the three European powers also “underestimates, as they have for years, what the Yemenis are capable of doing.”

“The evidence including the complexity, scope and impact of the attack indicates that this is the case,” Hook said, without presenting any proof.

In a sign of more diplomatic trouble head, the UK’s Johnson said on Monday that the US president could negotiate a “better” nuclear deal with Iran than that agreed to in 2015, which he described as “bad”.

Europe, unable to deliver promised JCPOA sanctions relief in the face of US intimidation, sternly implies that it may not be willing to not deliver on its promises for much longer. https://t.co/G8yGRW1twE

“I think there’s one guy who can do a better deal … the president of the United States. I hope there will be a Trump deal,” Johnson said in an interview with NBC while in New York for the UNGA.

He later clarified that he still supports the agreement, adding that Iran needs to return to compliance.

France’s Macron also appears to be considering abandoning the accord.

“I’m not married to the JCPOA,” he told reporters travelling with him to New York.

“It has to be said that the two main players are in the process of deciding to leave it. One has left, the other is telling us that they will leave,” Macron added.

Later, Iran’s Zarif appeared to respond to the statements, writing that Britain, France and Germany’s “paralysis in fulfilling their obligations w/o US permission has been clear since May 2018,” when Washington withdrew from the accord.

“No new deal before compliance w/ current one,” Zarif wrote on social media.

France has been trying to find a diplomatic solution to US-Iranian tensions, which soared after the Saudi attacks, and has carefully avoided assigning blame.

Previously, Macron had said he remained “cautious” about attributing responsibility for the attacks. But he later shifted positions and blamed Iran upon his arrival in New York.

Macron said at a UN news conference not long before the joint statement was issued that he planned to meet separately with Trump and Rouhani over the next day and would work to foster “the conditions for discussion” and not escalation.

But Zarif already ruled out any Iran-US meeting, saying Iran had received no request from the US, “and we have made clear that a request alone will not do the job.”

He said Trump “closed the door to negotiations” with the latest US sanctions, which labelled the country’s central bank a “global terrorist” institution – a designation the Iranian minister said the US president and his successors may not be able to change.

“I know that President Trump did not want to do that. I know he must have been misinformed,” Zarif said in a meeting with UN correspondents.

“We are committed to continuing our diplomatic efforts to create conditions and facilitate dialogue with all relevant partners interested in de-escalation of tensions in the Middle East.”

Al Jazeera’s James Bays, reporting from the UN, said developments on the Iran issue “are moving fast” and Trump is expected to devote a significant part of his UN speech on Tuesday to the ongoing crisis.

With additional reporting by Samira Sadeque in New York

Two rockets ‘hit’ near US embassy in Baghdad’s Green Zone

Lebanon protests: All the latest updates

On brink of ‘man-made’ starvation, Zimbabweans struggling to cope

Presence of US troops in Germany important for European, American security: Heiko Maas