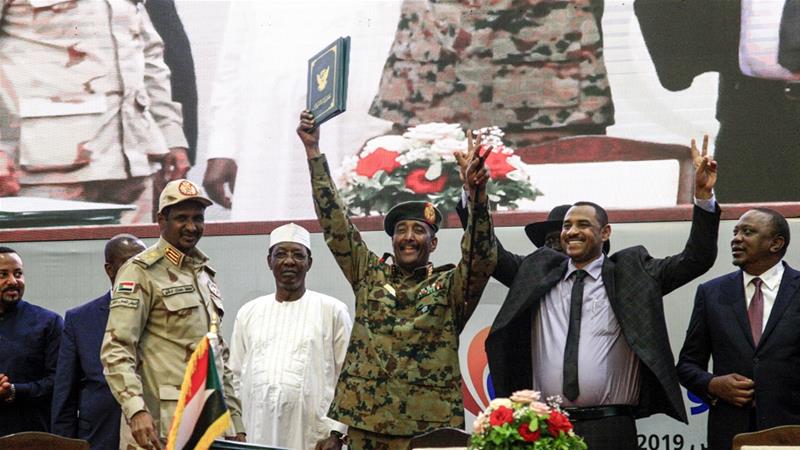 General Abdel Fattah al-Burhan has been sworn in as chairman of Sudan’s newly-formed sovereign council that will steer the country through a three-year transition to civilian rule.

“General Abdel Fattah al-Burhan Abdel Rahman was sworn in as president of the sovereign council,” the official SUNA news agency reported on Wednesday.

Al-Burhan headed the Transitional Military Council (TMC), which ruled the country since longtime leader Omar al-Bashir was deposed in April.

Prime Minister-nominee Abdalla Hamdok, as well as theremaining 10 members of the sovereign council, will be sworn in later on Wednesday.

Sudan’s pro-democracy movement and the army announced a joint ruling body on Tuesday, days after they signed a final power-sharing deal following pressure from the United States, the African Union and its Arab allies amid growing concerns the political crisis could ignite a civil war.

The council includes six civilians and five soldiers. It will be headed for 21 months by al-Burhan, followed by a civilian leader appointed by the protest movement for the remaining 18 months.

Among the five council members named by the protest movement are a woman and a journalist. They are Hassan Mohamed Idris, Al-Siddiq Tawer Kafi, Ayesha Musa Saeed, Mohamed Osman Hassan al-Taayeshi and Raja Nicola Issa Abdul-Masseh.

Both sides agreed on the appointment of a Coptic Christian judge as the 11th member of the council.

The power-sharing agreement also provides for a 300-member legislative assembly to serve during the transitional period and a cabinet of technocrats.

The main challenge for the new government will be an economic crisis stemming from a shortage of foreign currency, resulting in a cash crunch and long lines for fuel and bread.

The military overthrew al-Bashir in April following months of widespread demonstrations against his three-decade-long authoritarian rule. The protests initially erupted in December last year over dire economic conditions but shortly turned to calls for al-Bashir’s removal.

Protesters continued taking to the streets after al-Bashir’s toppling, fearing the military could cling to power, and demanded a swift transition to a civilian government.

The tortuous negotiations over the joint military and civilian council continued despite a deadly security crackdown on a protest sit-in in the capital Khartoum, which protesters blamed on the feared paramilitary Rapid Support Forces, headed by Hemeti.

At least 250 people have been killed since December, according to protest organisers.

Chile police continue to use pellet rounds despite suspension