The G7 nations have agreed to spend $20m to fight record fires tearing through the Amazon rainforest, an agreement Brazil’s President Jair Bolsonaro said treated his country like a “colony or no-man’s land”.

The presidents of France and Chile announced the pledge at the G7 summit in the French town of Biarritz on Monday, with France’s Emmanuel Macron saying: “We must respond to the call of the forest which is burning today in the Amazon.”

Satellites have recorded more than 41,000 fires in Brazil’s Amazon region so far this year – with more than half of those coming this month alone. Experts say most of the fires are set by farmers or ranchers clearing existing farmland.
The tropical forest covers more than five million square kilometres across nine countries: Brazil, Bolivia, Colombia, Ecuador, French Guiana, Guyana, Peru, Suriname and Venezuela. Its protection is seen as vital to the fight against climate change because of the vast amounts of carbon dioxide it absorbs.
Macron, the host of this year’s G7 summit, had declared the situation in the Amazon “an international crisis” and made the issue one of the gathering’s priorities.
He has threatened to block a huge new trade deal between the EU and Latin America unless Bolsonaro, a climate change sceptic, takes serious steps to protect the Amazon.

Brazil would have to agree to any reforestation plan, as would local communities.

Under pressure from the international community, Bolsonaro finally deployed on Sunday two C-130 Hercules aircraft to douse the fires at the weekend. He has also previously described rainforest protections as an obstacle to Brazil’s economic development and claimed NGOs could be setting the fires to embarrass him – without giving any evidence to back the claim

In a Twitter post on Monday, Bolsonaro said the idea of creating an international alliance to save the Amazon rainforest would be treating Brazil like “a colony or no man’s land”.
Describing the move as an attack on the country’s sovereignty, he also questioned the intentions behind Macron’s push to save the Amazon.

Macron accused him of skipping a scheduled meeting with the French foreign minister in favor of a barber appointment and reiterating that Bolsonaro had lied to him. He said: “It’s sad. First for him and for the Brazilians.”
He said Brazilian women “are doubtless ashamed to read that about their president” and that he hoped the country would soon have a president who could behave according to the standards of the office. 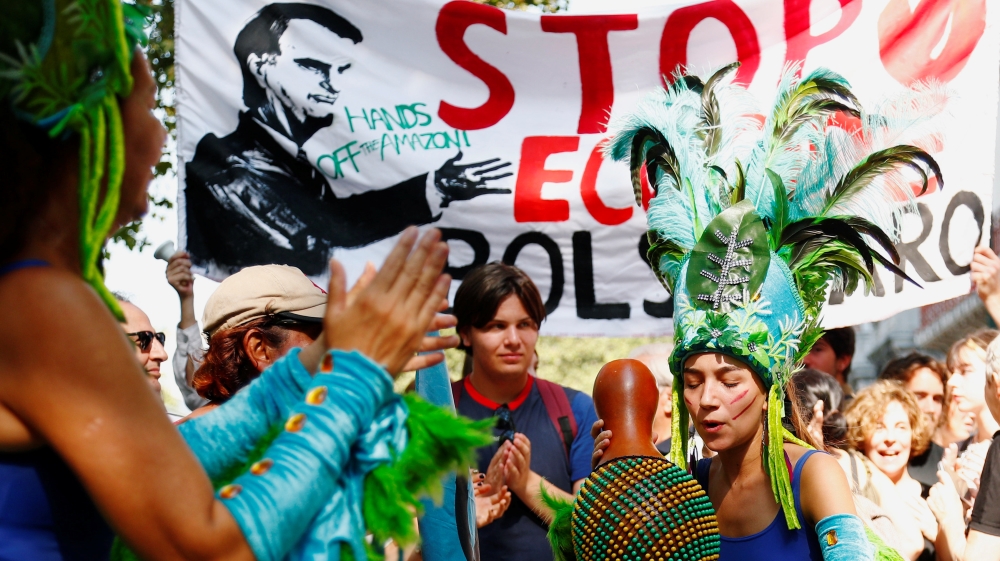 Protesters wearing Brazilian carnival costumes dance during a demonstration to demand protection for the Amazon rainforest outside the embassy of Brazil in Brussels, Belgium [Francois Lenoir/ Reuters]

“No [Brazilian] democratic government has suffered such international criticism as Bolsonaro is going through,” said Mauricio Santoro, an international relations professor at Rio de Janeiro State University.
“By breaching international environmental agreements, Brazil has been discredited, blurred and unable to exercise any type of leadership on the international stage,” he told The Associated Press news agency.
Meanwhile, thousands of people have demonstrated in cities across Brazil and outside Brazilian embassies around the world. #PrayforAmazonia became a worldwide trending topic.
German Chancellor Angela Merkel said her country and others will talk with Brazil about reforestation in the Amazon once the fires have been extinguished.
“Of course [this is] Brazilian territory, but we have a question here of the rainforests that is really a global question,” she said on Sunday.
“The lung of our whole Earth is affected, and so we must find common solutions.”

Indian-administered Kashmir broken up: All you need to know