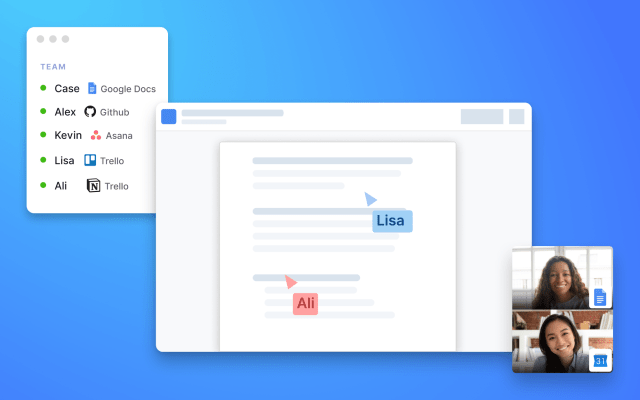 Tandem, one of the most sought after companies to graduate from Y Combinator’s summer batch, will emerge from the accelerator program with a supersized seed round and an uncharacteristically high valuation.

The months-old business, which is developing communication software for remote teams after pivoting from crypto, is raising a $7.5 million seed financing at a valuation north of $30 million, sources tell TechCrunch. Airbnb investor Andreessen Horowitz is leading the round.

Tandem and a16z declined to comment for this story. The round has yet to close, which means the deal size is subject to change. Y Combinator startups raise capital using SAFE agreements, or simple agreements for future equity, which allow investors to buy shares in a future priced round at a previously agreed-upon valuation.

We’re told several top venture capital firms were vying for a stake in Tandem. One firm even gifted the founders a tandem bike, sources tell TechCrunch,resorting to amusing measures to sway the Tandem team. But it was a16z — which has an established interest in the growing future of work sector, evidenced by its recent investment in the popular email app Superhuman — that ultimately won the coveted lead investor spot.

Tandem provides a virtual office for remote teams, complete with video-chatting and messaging capabilities, as well as integrations with top enterprise tools including Notion, GitHub and Trello. The service launched one month ago and has signed contracts with Airbnb, Dropbox and others. The company claims to be growing 50% week-over-week.

“Every company is a remote company,” Tandem chief executive officer Rajiv Ayyangar said during his pitch to investors on day two of Y Combinator Demo Days this week. “You have salespeople in the field, [companies with] multiple offices, people working from home. Tandem isn’t just building the future of remote work, it’s building the future of work.”

Ayyangar was previously a data scientist at Yahoobefore joining Yakit, a startup seeking to simplify ecommerce delivery, as the director of product. Co-founders Bernat Fortet Unanue and Tim Su are also Yahoo alums.

We’re told Tandem’s fundraise was nearly complete before it pitched to investors Tuesday afternoon. Startups that participate in YC are often flooded with offers from VCs throughout the three-month program. Firms are hungry for the batch’s Airbnb, Dropboxor Stripe — graduates of the program — and will pay premiums on startup equity for their chance to invest in a future ‘unicorn.’

As a result, the median seed deal for U.S. startups in 2018 was roughly $2 million — a record high — with typical pre-money valuations hovering north of $10 million. Tandem’s seed financing represents both a trend of swelling seed deals and valuations, as well as a tendency for VCs to dole out more cash to fresh-from-YC companies amid heightened competition amongst their peers.

The previous YC batch, which wrapped up in March, included ZeroDown, Overview.AI and Catch, a trio of companies that pocketed venture capital ahead of demo day. ZeroDown, a financing solution for real estate purchases in the Bay Area, raised upwards of $10 million at a $75 million valuation before demo day, sources told TechCrunch at the time (months after demo day, Zero Down announced a whopping $30 million financing). ZeroDown was an outlier, of course, as the company’s founders had previously co-founded the billion-dollar HR software company Zenefits.

As for the summer batch, we’re told Actiondesk, Taskade and Tandem are amongst the startups to garner the most hype from investors. Some even forwent the demo day pitch altogether. BraveCare, which is creating urgent care clinics intended just for kids, raised $4.1 million ahead of demo day, we’re told. The company opted not to pitch to additional investors this week.

You can read about all the company’s that pitched during demo day one here and demo day two here.

Google is acting the bully in fight over new media code