Philippine President Rodrigo Duterte has ordered a controversial senior police commander, who was previously involved in high-profile drug operations that left two town mayors dead, to “start killing” in his newly assigned jurisdiction in the central island of Negros.

In a speech to business leaders in Manila on Thursday night, Duterte said Lt Col Jovie Espenido should carry out the government’s war on drugs in the city of Bacolod, a Spanish-era city with a population of more than 560,000.

“Bacolod is badly hit [by drugs] now. I placed Espenido there. I said, ‘Go there and you are free to kill everybody. Son of a b***h, start killing there. The two of us will then go to jail’,” Duterte said in a mix of Filipino and English.

Despite warnings that he could be prosecuted for his public pronouncements about killing drug suspects and for the deadly war on drugs, Duterte has repeatedly taunted the international community and human rights groups.

The president had also declared that he does “not care about human rights”, and issued a “shoot-to-kill” order if drug suspects resist arrest.

On Friday, Karen Gomez Dumpit of the Philippine Commission on Human Rights condemned Duterte’s latest statement, saying that the president is “enabling” the continued “brazen violation of human rights in the country”.

“That’s not the kind of language we want to hear from the president,” Dumpit told Al Jazeera, adding that she expects Bacolod residents to express outrage at the appointment of Espenido, who was named as deputy police director for operations in Bacolod on Wednesday.

In a statement on Friday, Police spokesman Brig Gen Bernard Banac said Espenido’s appointment is seen “as putting emphasis on his [Duterte] campaign promise to eradicate illegal drugs”. He was also quoted as saying that Duterte’s latest statement is just “hyperbole”.

In 2017, Espenido was the police chief of Ozamiz City on the island of Mindanao when officers killed the mayor, Reynaldo Parojinog, his wife and 13 other people in a pre-dawn raid, which relatives said was premeditated murder. 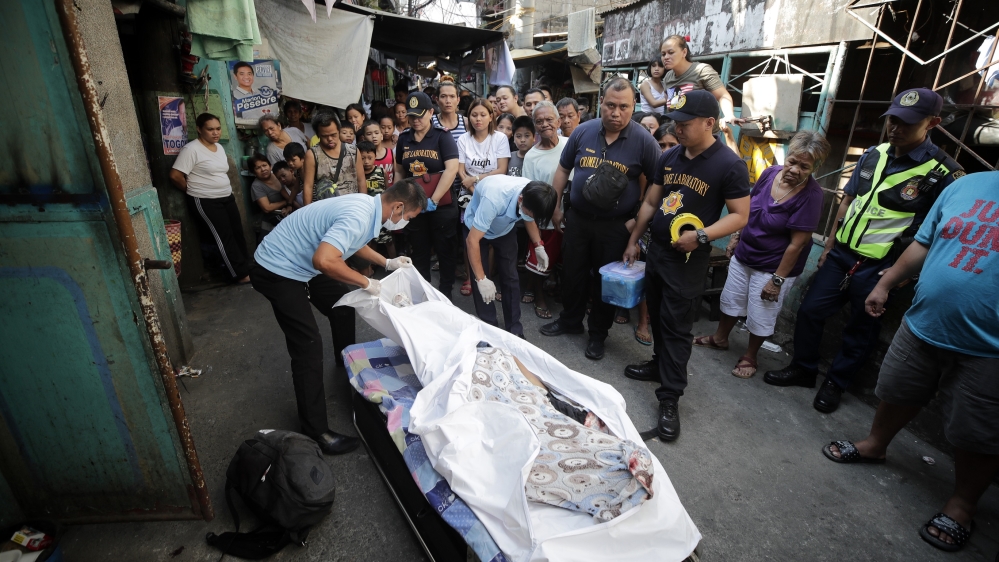 Human rights advocates say the number of deaths related to the drug war in the Philippines could be as high as 27,000 as of June 2019 [File: Francis Malasig/EPA]

Police said it was a legitimate anti-drug operation and that Parojinog and his security personnel resisted arrest.

Espenido was also the police chief of Albuera on the central island of Leyte in 2016, when the town mayor, Rolando Espinosa Sr, was killed inside his jail cell.

The slain mayor had voluntarily turned himself in to police after Duterte warned that he would go after him if he refused to surrender.

Parojinog and Espinosa were among those 158 local officials that Duterte publicly linked to drugs two months after becoming president.

Duterte had also listed several judges and police officers as being involved in drug trade across the country.

For his part, Espenido assured residents of Bacolod that his new assignment would be different from his previous work.

“I guess, that’s the expectation of the people, because they have seen what I have done. But to give you an idea, I don’t think it would be like that,” Espenido was quoted by Philippine media as saying.

In September, Bacolod Mayor Evelio Leonardia expressed his support for the war on drugs and said that the high satisfaction ratings of Duterte “simply tells us that this is what the people want”.

From June to August of this year, police in Bacolod had reportedly seized a total of 17.193 million pesos ($335,000) worth of methamphetamine in the city, according to the Philippine News Agency.

Since Duterte assumed presidency in mid-2016, some 6,660 people have been reported killed during drug-related police operations, according to a June 2019 report published by the Philippine National Police.

In a statement sent to Al Jazeera on Friday, Butch Olano of Amnesty International said that instead of further inciting violence, the Duterte administration “must focus on probing police abuses”.

“This encouragement of bloodshed must end once and for all, and efforts toward this must begin at the highest levels of government, notably the President himself,” Olano said.

He also said that Espenido “should not have been promoted and appointed to a senior position given his involvement in bloody operations in the past”.

“It appears that under this administration, not only illegal drugs but also errant cops are being recycled, and more worryingly, rewarded,” Olano added.

In recent weeks, Duterte’s war on drugs policy came under new scrutiny after it was revealed that his most senior police chief was forced to resign after being accused of protecting his officers from being prosecuted for allegedly re-selling huge quantity of drugs seized as evidence from suspects.

Lebanon protests: Thousands demand ‘fall of the regime’ in Beirut

Pakistani origin schizophrenic man gunned down by police in Canada