London, United Kingdom –Hundreds of climate protesters have blocked roads in central London to launch a two-week protest as thousands of activists are expected to descend on the British capital aiming to occupy key sites around government departments and the Houses of Parliament.

Extinction Rebellion activist groups from across the country on Monday took drums and banners to 11 sites around Westminster, besieging bridges and roads leading to Parliament.

Across the capital, meanwhile, signs reading “Business as usual=death” popped up on bridges and trains stations.

As some protesters marched from the Houses of Parliament down Whitehall, a street lined with government departments and ministries, a group of performers wearing crimson gowns took their silent walking protest to the iconic Trafalgar Square.

Brazilian choreographer Tiago Gambogi, one of the coordinators of the group known as “Red Brigade”,was dragged away by police following a stop-and-search.

“In 2012 I was in the Amazon, and a group of fishermen and indigenous people said you must come and help us to stop building the Belo Monte dam in Altamira. That’s when I started doing activist performances,”the 43-year-old earlier told Al Jazeera, dressed as a clownish scarecrow in a mining hat.

Nearby, a group of protesters blocked off all entrances to Trafalgar Square by locking themselves to vehicles including a symbolic funeral car.

Artists, musicians and other celebrities including actress Juliet Stevenson and environmental journalist George Monbiot were among those present.

Earlier in the day, protesters had locked themselves onto a fake nuclear missile in front of the Ministry of Defence, leading to the arrest of 23 people including an 81-year old Quaker and a 66-year old retired naval officer, according to the group.

By early afternoon, police said they had carried out 135 arrests. Eleven people had been held on Saturday and Sunday on suspicion of conspiracy to cause public nuisance. Food, bins, portable toilets were confiscated from a warehouse in south London, as well as six vehicles used to transport them.

Extinction Rebellion, which says it has more than 480 active groups in 72 countries, is known for its civil disobedience tactics, including activists volunteering for arrest.

“I’m in a privileged position,” said Joel, one of the activists locked to the funeral car on Trafalgar Square who said he was willing to get detained. “Many people around the world can’t protest because they haven’t got the resources or the time, or they’re scared of the harm it might cause them,” he added.

Throughout the day, volunteers brought cushions, food and water to those who locked themselves to visitors and to each other. 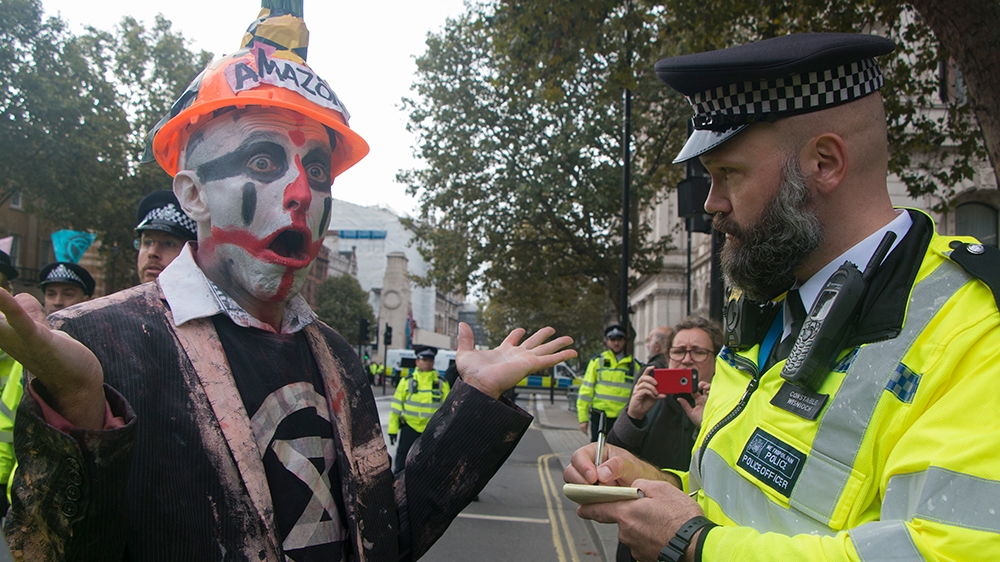 ‘Up to us to raise awareness’

In April, thousands of people blocked sites around London by disrupting traffic with “mass die-ins”, glueing themselves to trains and smashing the windows of oil giant Shell’s headquarters. More than 1,000 people were arrested, many of whom are currently facing trial.

It led to the UK government passing a non-binding resolution declaring an environment and climate emergency, one of Extinction Rebellion’s key demands. It was approved without a vote after a motion was tabled by Jeremy Corbyn, leader of the main opposition Labour Party.

“The science says exactly the opposite of what governments are doing,” Max, a 35-year-old molecular geneticist originally from Germany, told Al Jazeera. “I think none of the governments are really doing enough, and it’s up to us to raise awareness.”

Simultaneous protests took place in countries around the world, from New Zealand through Colombia to the Gambia.

In London, Extinction Rebellion expects between 20,000 and 30,000 people from local groups across the UK to make their way to the capital over the next two weeks, aiming to cause disruption to get the government to act on the climate crisis.

They want the government to commit to reducing carbon emissions to net-zero by 2025 and create a Citizens’ Assembly to lead decisions on the climate crisis.

The movement hopes this round of protests will be five times bigger than their “April rebellion”, and said that 5,000 people have volunteered to be arrested, 2,245 are willing to go to prison and 1,836 are willing to go on hunger strike.

Planned events include a sit-in at London’s City Airport, a march on October 12, and the disruption of an oil and gas summit.

‘There is war everywhere. Why would we start a fire here?’