Experts have warned that a section of the Planpincieux glacier on the iconic Mont Blanc is at the risk of collapsing.

According to the Safe Mountain Foundation, 250,000 cubic metres of ice could break from the rest of the glacier.

“If this volume of ice fell down, it would reach the valley floor in 80 seconds,” Stefano Borrello, 42, public work counsellor of the Aosta Valley, told Al Jazeera.

“These phenomena once again show that the mountain goes through a phase of strong changes due to climate factors,” Stefano Miserocchi, the mayor of the nearby city of Courmayeur, said in a statement.

“Therefore, it is particularly vulnerable.”

For safety reasons, Miserocchi ordered the closure of two local roads on Tuesday. However, he assured that Courmayeur and the nearby populated areas are safe.

“Mont Blanc is not crumbling, and there is no danger for the local population,” he stressed in a public meeting on Thursday.

The Planpincieux is a hanging and temperate glacier that extends for 1,327 square kilometres (512sq miles) on the southern slopes of the Grandes Jorasses mountain.

The Aosta Valley started monitoring the glaciers in the region 10 years ago. The Planpincieux was put under surveillance in 2013. The newspaper La Repubblica reported that two blocks of ice – 30,000 and 50,000 cubic metres in size – broke off from the Grandes Jorasses mountain just a year later.

Technicians from the Safe Mountain Foundation and the Aosta Valley have just installed a special radar to monitor any further developments.

Breakings and slumps are quite common for this type of glacier. However, the amplitude of the last movement came unexpectedly.

“The volume and the pace of ice are fairly exceptional,” Borrello said.

An analysis shows that, since late August, the lower section of the glacier has been sliding at speeds of 50 to 60cm a day.

In his speech at the United Nations General Assembly (UNGA) on Tuesday, Italian President Giuseppe Conte voiced his concern for the Alpine glaciers.

“I heard the news about a glacier on Mont Blanc in danger of collapsing,” he said. “This alarm must shake [our conscience] and push us to action.”

A collapse of the Planpincieux might be just the first in a row.

“As in any other part of the world, all our glaciers are retreating,”counsellor Borrello said.

Scientists classify glaciers according to their thermal state. Temperate ones, such as the Planpincieux, are affected by the surrounding temperature. 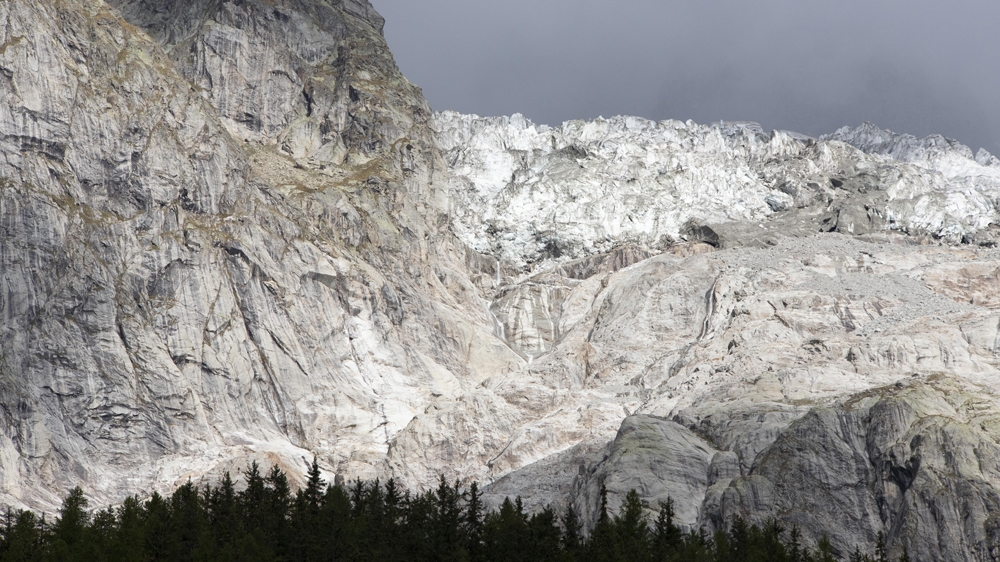 Two blocks of ice – 30,000 and 50,000 cubic metres in size – broke off from the Grandes Jorasses mountain [Courmayeur town hall]

On the other hand, polar glaciers remain imperturbable regardless of the weather, maintaining their temperature below the freezing point.

“Almost all the glaciers in the Alpine region are temperate glaciers,” said Renato Colucci, a glaciologist at the Italian National Centre for Research (CNR). “With the current temperatures, anyone below 3,500 metres of altitude will melt down in the next 30 years.”

Colucci bases his estimation upon data documenting the bulk of ice in these glaciers in the last century, as well as on”climate proxies” collected in the region and globally.

A “proxy” is an imprint created during the past that can help in reconstructing the climate of those years. Examples of proxies include ice cores, tree rings, boreholes, corals, lake and ocean sediments.

“All of these clearly show that temperature has never been so high as in the last 11,700 years,” Colucci said.

In the wake of the UNGA, the Italian section of the World Wide Fund for Nature (WWF) compiled different data regarding the effects of climate change in the Mediterranean region.

According to the last Italian Glacier Registry contained in their report, the entire surface of Italian soil covered by ice has withdrawn from 519sq km in 1962 to 368sq km. The loss roughly stands at 30 percent.

The WWF estimates that the loss of the glaciers would affect the water supply for the local population, as well as the production of hydroelectric energy in the region.

Another risk is connected to the creation of a water reservoir on top or inside the glaciers, “which could lead to sudden and unpredictable flooding,” Colucci said.

This happened last summer, when the torrent Triftbach suddenly flooded the Swiss town of Zermatt, the Italian Switzerland Radio reported.

Mont Blanc is the highest massif in Western Europe.

Since the 18th century, it has grabbed a special place in the European imagination, so that writers from Mary Shelley to Sophie Kinsella have described its bulk in their books.

“For every Italian alpinist, Mont Blanc is a symbol,” said Fabio Meraldi, 54, who worked as a mountain guide for 36 years.

“When you stare at its top from the city of Courmayeur, you face a colossus. To me, it is simply the mountain.”

In 1995, Meraldi established the speed record for ascending and descending the massif from the Italian side. It took him six hours and 43 minutes to reach the top and return.

“I still have faith that this cycle could be reverted,” Meraldi said.

A beacon of hope might shine over the Planpincieux too: A wave of cold weather is coming, and the snowfall could stabilise the glacier.

Every eye in the valley is turned to the radar. Meanwhile, the glacier has slid down other 50cm towards the valley.

Did Melania Trump really ‘feud’ with her stepdaughter? Ivanka Trump may spill the beans soon

US Senators demand briefing from Trump admin on Syria