Ethiopian Prime Minister Abiy Ahmed’s awarding of the Nobel Peace Prize has been ushered in by praise for his efforts in ending two decades of hostility with neighbouring Eritrea and initiating broad domestic changes – but also calls to tackle outstanding challenges and further enhance reforms.

Bestowing the award on Friday, Chair of the Norwegian Nobel Committee Berit Reiss-Andersen said Abiy had “reached out his hand” to formalise a peace process with Eritrea and given many Ethiopians a “better life and brighter future”.

Africa’s youngest leader, the 43-year-old sparked an historic rapprochement with Eritrea soon after coming to power in April last year, restoring ties that had been frozen since a 1998-2000 border war. He also helped mediate a maritime territory disputebetween Kenya and Somalia and has been a key part of efforts to bring together the leaders of Sudan and South Sudan for talks.

Domestically, the prime minister has introduced a series of sweeping political and economic adjustments, including granting amnesty to thousands of political prisoners, discontinuing media censorship and dismissing several high-profile figures suspected to be guilty of corruption.

Reflecting on Abiy’s efforts, United Nations Secretary-General Antonio Guterres said peace efforts between Ethiopia and Eritrea had inspired hopes of regional “security and stability” and that the prime minister’s leadership had “set a wonderful example for others in and beyond Africa looking to overcome resistance from the past and put people first”.

As further praise poured in -African Union (AU) chief Moussa Faki described Abiy’s award as a source of “great pride” – the prime minister’s office released a statement describing the recognition as “a collective win for Ethiopians, and a call to strengthen our resolve in making Ethiopia … a prosperous nation for all”.

It is with great pride that I congratulate Ethiopian PM @AbiyAhmedAli on being the 100th recipient of the Nobel Peace Prize for his historic peacebuilding efforts that have given the world hope at a time it needs servant leadership more than ever. pic.twitter.com/9I17iAZ4ch

“Abiy’s rhetoric has resonated with a lot of Ethiopians who want peace, reconciliation, unity and prosperity in this country,” Hallelujah Lulie, programme director at the Addis Ababa-based Amani Africa think-tank, told Al Jazeera.

Lulie added that Ethiopia’s transition away from a history of authoritarianism remained a “work in progress”, but said Abiy’s award would “serve as an impetus to continue this ambitious project of democratising the Ethiopian state and liberalising the political space”.

This view was echoed by Reiss-Andersen in her announcement, which acknowledged that “no doubt” this year’s prize would be seen by some as “being awarded too early” but stressed the commission’s belief that it was “now” that Abiy’s efforts deserved recognition and needed encouragement.

Expressing a similar view, Amnesty International said the award “should push and motivate” Abiy to “tackle the outstanding human rights challenges that threaten to reverse the gains made so far”.

The organisation warned Abiy’s work was “far from done” and cautioned that still-present tensions within Ethiopia, a mosaic of ethnic, linguistic and religious groups, “threaten instability and further human rights abuses”.

Indeed, Abiy’s attempts to introduce reforms have been accompanied by a surge in violence – often along ethnic lines amid long-simmering tensions – that has partly been blamed for the displacement of an estimated three million people. The prime minister, himself, has already survived an apparent assassination attempt.

Abiy’s Nobel-lauded peace deal with long-time Eritrean President Isaias Afwerki has meanwhile yet to lead to the full normalisation of the two neighbours’ ties, with the border re-closed and trade deals still absent.

At the same time, activists’ hopes that the peace process would lead to substantial policy changes within Eritrea have been largely dashed, with universal conscription still in place despite the rapprochement with Ethiopia.

“[The] peace deal unfroze diplomatic relations, reopened telephone lines, and allowed some travel between the two nations. But key border disputes are unresolved, and Eritrea remains without constitutional government, so there’s no peace dividend yet for its long-suffering citizens,” commented William Davison, senior Ethiopia analyst at the Belgium-based International Crisis Group. 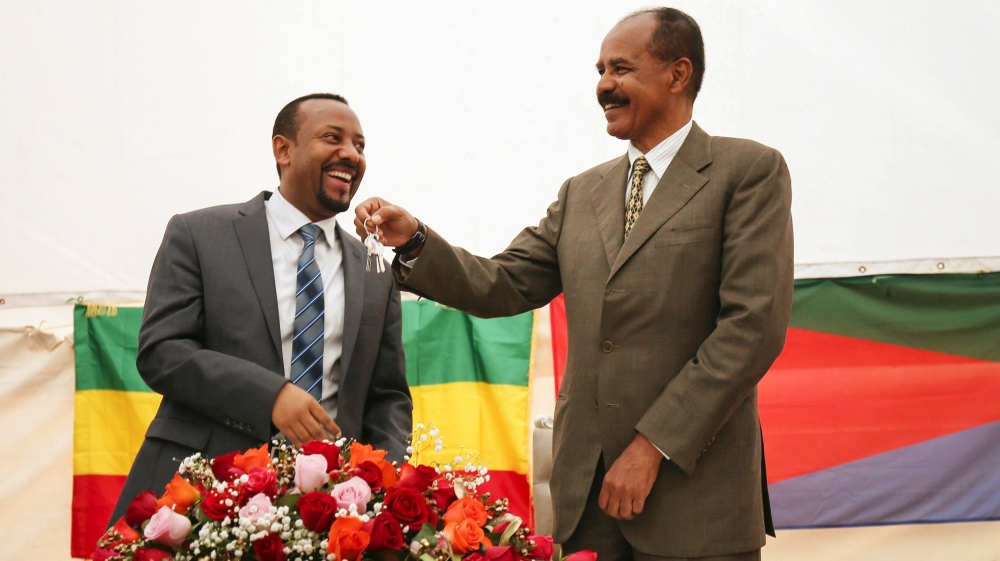 Afwerki (right) receives a key from Abiy during a ceremony marking the reopening of the Eritrean Embassy in Addis Ababa in July 2018 [File: Tiksa Negeri/Reuters]

In 2016, a UN inquiry called the compulsory national service programme an institution “where slavery-like practices take place” and accused Eritrean leaders of crimes against humanity, including murder, torture and rape. The government of Isaias, a former rebel commander who has been in power since the early 1990s, denied the accusations.

For Vanessa Tsehaye, an Eritrean political activist, Abiy’s peace efforts with Asmara had “prolonged the suffering” of Eritrean people by “legitimising and prolonging the rule” of Isaias, a leader accused by critics of having turned Eritreainto a “one-man dictatorship”.

“Peace rather than war is always good, anyone who has any kind of heart supports that, but when you translate that into the everyday lived experience of Eritreans, they will say that nothing has changed for them [because of Abiy],”Tsehaye told Al Jazeera.

“Beyond the very literal meaning of no war we must have a broader understanding of what peace actually means and, in that sense, I don’t think this effort makes him worthy of the prize,” she added.

CORRECTION: The Nobel Peace Prize has been awarded to a man who has befriended and whitewashed a dictator next door for his nation’s own interests whilst prolonging the suffering of the Eritrean people. I am not celebrating anything today. #NobelPeacePrize #Eritrea #Ethiopia https://t.co/AJfzmq7HYA

But Davison described Abiy’s decision to “prioritise making peace over ending repression” in Eritrea as “understandable”, given the former’s limited influence in his neighbour’s domestic affairs.

“However, to broaden the peace-making process, Abiy and Eritrea’s other partners should now do all they can to encourage Isaias and his allies to end the repression and introduce democratic reforms and restore civil liberties in Eritrea,” he told Al Jazeera.

“Hopefully it [the award] will give Abiy and Isaias’ government renewed impetus to further the peace process by trying to negotiate issues such as full demilitarisation, demarcation of the border, and instituting trade and immigration cooperation.”

Ferries and ‘the tunnel’: Britain and EU inch towards Brexit deal

Meghan and Harry are living in Los Angeles: reports

IMF MD says global economy ‘not out of the woods yet’