Turkey’s President Recep Tayyip Erdogan demanded the United States hand over the commander of Kurdish-led forces in Syria, in a sharp rebuke of Washington’s call for negotiations with the Syrian Kurds.

The call for Mazloum Abdi’s extradition on Thursday came after US President Donald Trump, in a letter to Erdogan on October 11, said the Kurdish commander was “willing to negotiate” with the Turkish president and “make concessions that they would have never made in the past”.

Ankara, however, views the group as “terrorists” linked to Kurdish separatists inside Turkey and launched a military push to drive the fighters away from its border with Syria.

Speaking to state-run TRT on Thursday night, Erdogan said he instructed his justice minister to take the “necessary steps” for Abdi’s extradition.

“With the US, we have an extradition agreement. The US should hand this man to us,” he said. 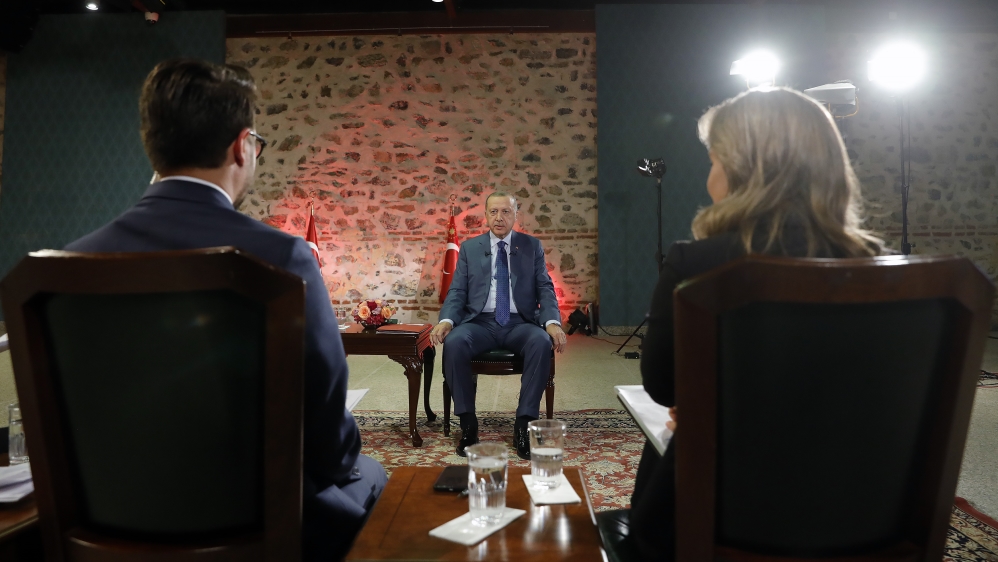 Erdogan’s remarks came amid calls by US legislators on the Trump administration to fast track a visa for Abdi to travel to Washington DC and brief the Congress on the situation in northeast Syria.

In a letter to US Secretary of State Mike Pompeo on Wednesday, the senators said “it would be very beneficial for Congress and the administration to hear directly from the military leadership of the SDF about the situation on the ground and the fight against ISIS.

“Therefore, should General Mazloum Kobani Abdi – who is responsible for everyday operations against ISIS – request to visit the United States, we ask you to expedite his visa and issue any applicable waiver that might be required.”

Meanwhile, Abdi told a news conference in Kurdish-led Qamishli that the SDF was in talks with both Russia and the US to protect the Kurdish people against the Turkish assault, launched on October 9 but now suspended in truces brokered separately by Washington and Moscow.

The fighting has killed scores of people on both sides of the border and displaced nearly 180,000 people inside Syria.

“Our reservations are related to the protection of our people. We don’t accept that our people and our cities remain without protection,” Abdi said on Thursday.

Under the ceasefire deals, the SDF agreed to withdraw from a so-called “safe-zone” 30km deep into Syrian territory. Ankara wants to resettle some of the 3.6 million Syrian refugees it hosts on its soil in this area.

Turkey now controls an area in northern Syria the length of 120km (75 miles) east of the Euphrates River along the border between the two countries, its Vice President Fuat Oktay said on Friday.

On Thursday, Abdi said his militia was holding discussions with Washington on keeping US forces in the region, as well as regaining control over positions lost since the Turkish military operation began.

The Kurds blame a decision by the US to pull its forces out of Syria for Ankara’s offensive and have turned to Damascas and Moscow, Washington’s foes, to deploy troops to help fend off the Turkish assault. Since then, Trump said some US soldiers will remain in parts of northeast Syria to secure oilfields there.

“There was a recent call with President Trump,” said Abdi. “And he confirmed to me that they [US troops] will stay here for a long time and that their partnership with the Syrian Democratic Forces will continue for a long time. We are now discussing with the Americans how to regain positions in some areas of northeast Syria.”

I really enjoyed my conversation with General @MazloumAbdi. He appreciates what we have done, and I appreciate what the Kurds have done. Perhaps it is time for the Kurds to start heading to the Oil Region!

“He appreciates what we have done, and I appreciate what the Turks have done,” he said, calling on the Kurds to start heading to the “Oil Region”.