Ecuadorian President Lenin Moreno has imposed a curfew on the capital, Quito, as 10 days of protests continue to rock the city, paralysing the centre and forcing the government to flee.

In a post on Twitter on Saturday, Moreno said he had arranged the curfew and “militarisation” of Quito and the surrounding area to assist security efforts again what he called “the intolerable excesses of violence” in the area.

Without giving details of what the militarisation would entail, Moreno said the curfew would take effect at 3:00 pm (20:00GMT).

Police have clashed with protesters demonstrating against new austerity measures that have led to a rise in fuel prices.

The measures angered the country’s politically-active indigenous groups and trade unions, but demonstrations have since broadened into calls for Moreno to resign.

Al Jazeera’s Manuel Rampalo, reporting from the capital, described scenes of chaos on the streets of Quito.

“This is no longer about economic policies, this is about a lack of confidence in the government as a whole,” he said. 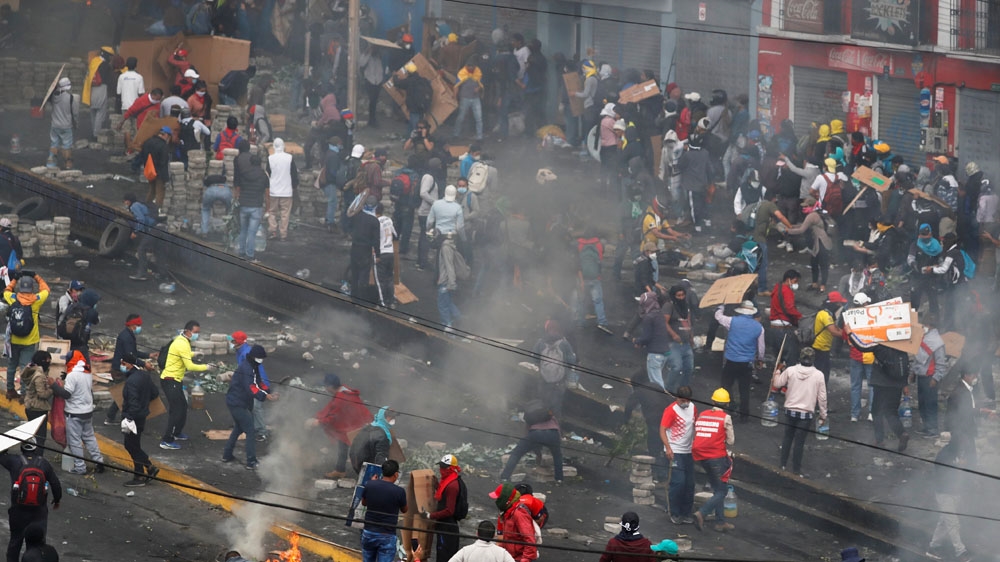 Shortly before Moreno’s announcement, the protests’ indigenous leaders agreed to hold talks with the president.

The Confederation of Indigenous Nationalities of Ecuador (CONAIE) said in a statement posted on Twitter that they had decided to participate in a “direct dialogue” with Moreno a day after rejecting his offer for talks.

Minutes after the CONAIE statement was released, the mayor of Quito Jorge Machado told local television that the government will “analyse” the law that ended fuel subsidies.

However, little changed on the ground, with Rampalo saying the agreement does not guarantee an end to protests.

“Even with the leadership of the indigenous communities, there’s a split. Not everybody agrees,” he said, adding that people he’d spoken to have said the situation is already out of control.

At least five people have been killed since the demonstrations began, according to the public defender’s office, while thousands more have been injured.

Protesters on Saturday blocked road access to the city’s international airport and set fire to the national auditor’s office as police responded with tear gas and rubber bullets and authorities imposed water and power cuts across the city.

Ecuador’s energy minister said on Saturday that closures of oil wells by protesters had curbed production of more than one million barrels of crude so far, while a Chinese-owned copper mine announced it was temporarily limiting its operations as a precautionary measure.

Top US diplomat keeps up pressure on China over Muslim Uighurs