Hundreds joined a sit-in on Monday on busy inner Sydney road in Australia, which police brought to an end by dragging away demonstrators and charging 30 people.

A small group of activists also locked themselves to a bridge in Brisbane, where police said they arrested and charged seven people.

Meanwhile, demonstrators shut down part of Wellington, New Zealand’s capital, by chaining themselves to a bright pink car. Police said 30 people were arrested later in the day but none were charged.

They were the start of planned disruptions in 60 cities around the world over the next two weeks by protest group Extinction Rebellion, which is warning of a looming environmental “apocalypse”.

In the German capital Berlin, about 1,000 people blocked the Grosser Stern, a traffic circle in the middle of the city’s Tiergarten park dominated by the landmark Victory Column, in a protest that started in the early hours.

Members of Extinction Rebellion also set up a camp outside Chancellor Angela Merkel’s office, reflecting dissatisfaction with a climate policy package drawn up last month by her government.

In the Netherlands, hundreds of demonstrators chanting “rebellion!”blocked traffic in downtown Amsterdam, defying a ban by police who said they would make arrests to prevent them from disrupting commuters. 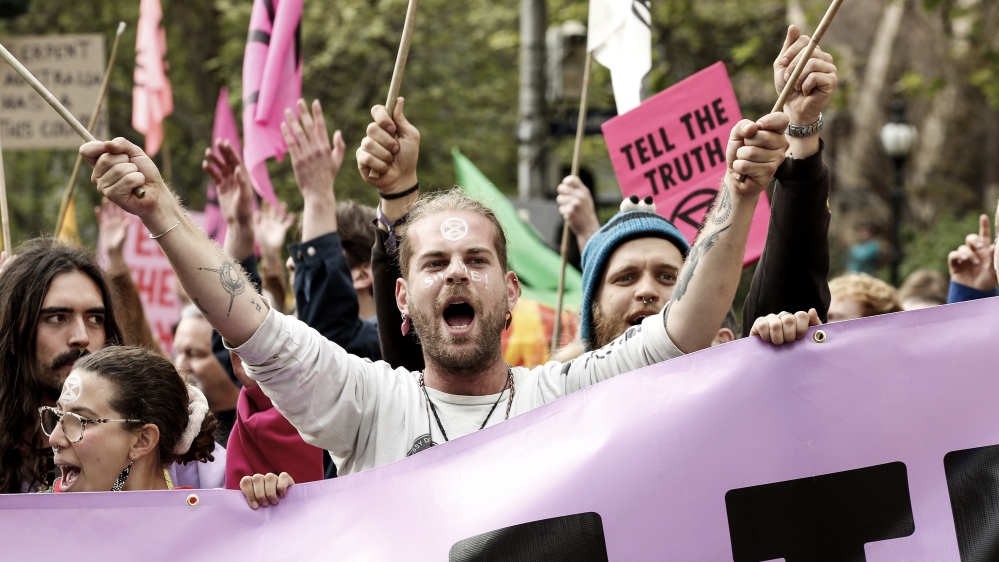 Extinction Rebellion was established last year in the United Kingdom by academics and has become one of the world’s fastest-growing environmental movements.

The movement, also known as XR, now has chapters in some 50 countries.

The group has scheduled non-violent protests chiefly in Europe, North America and Australia over the next two weeks. Events will also be held in India, Argentina, and South Africa.

An “opening ceremony” on Sunday evening attracted hundreds of people to central London, where plans are in place to shut down key sites – including Westminster and Lambeth bridges – in addition to protests outside key government departments.

Hundreds of activists barricaded themselves inside a Paris shopping centre for hours over the weekend, unfurling banners with slogans such as “Burn capitalism, not petrol” above restaurants and fashion boutiques.

In New Delhi, one of the world’s most polluted cities, dozens of protesters staged another preliminary event by holding a “die-in” on a road in the heart of India’s capital.

Holding up hands covered in red paint and signs such as “There is no planet B”, they called on the Indian government to act to tackle climate change.

‘There is war everywhere. Why would we start a fire here?’

Questions being asked on COVID-19 models that prompted lockdowns