China’s military has shown off a new hypersonic ballistic nuclear missile believed capable of breaching all existing anti-missile shields deployed by the United States and its allies.

The vehicle-mounted DF-17 was among weapons displayed on Tuesday in a large military parade led by President Xi Jinping to mark the 70th anniversary of the founding of the People’s Republic of China.

Some analysts have called the new missile a threat to regional stability because its speed allows far less time to determine whether to fire nuclear weapons in response.

That speed, and the missile’s use of multiple independently manoeuvrable re-entry vehicles to deliver warheads, makes it far more difficult to detect and intercept.

The DF-17’s hypersonic glide vehicle technology also permits it to fly at a much lower altitude just before delivering its warhead, further frustrating attempts to detect and intercept the weapon.

During the 80-minute parade, Xi was seen waving as the military’s latest weapons and equipment were paraded in Beijing’s Tiananmen Square.

Joining him at the stage were former Chinese leaders Hu Jintao and Jiang Zemin.

What message the rest of the world will get from China’s military parade? Guess “peace” isn’t going to be high on the list. Probably reinforces some of the negative perceptions. It’s a largely domestic play, stoking the 1.3 billion with patriotic/nationalistic pride.But for what?

According to an analysis of by the Center for Strategic and International Studies, the missile is capable of striking the continental US within 30 minutes.

Other weapons featured were the JL-2 missile, which can be launched from a nuclear submarine “providing sea-based nuclear deterrence”, as well as a new generation of anti-ship missiles called YJ-18, according to state television CGTN.

A new and advanced radar system that could “detect jets and missiles” was also introduced, as well as new HQ-9B surface-to-air missiles “capable of intercepting multiple air strike weapons in a complex electro-magnetic environment”. 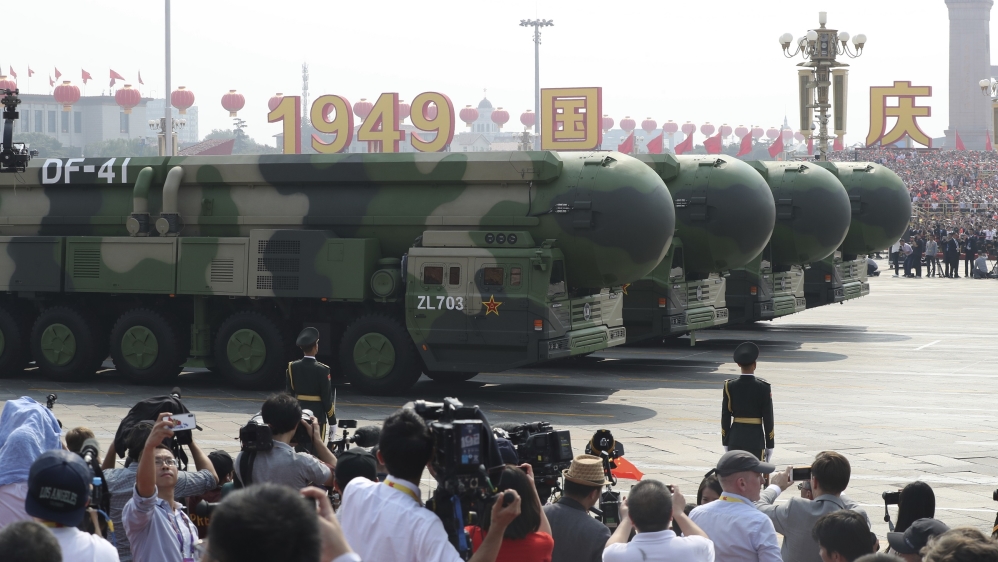 In all, 160 aircraft and 580 pieces of military equipment, as well as 15,000 military personnel, were in the parade, according to the state-owned news website, Xinhua.

In 2018, China spent an estimated $250bn on its military, according to the Stockholm International Peace Research Institute. In comparison, the US spent $649bn during the same period.

China has the largest standing military in the world, with a total of two million active members, compared to1.29 million in the US.

Tan Min, the parade organiser, was quoted as saying that all the weapons and equipment displayed were “domestic and in active service” complete with advance technology for “better strike accuracy”.

Hu Xijin, editor-in-chief of the state-owned Global Times newspaper, wrote on social media that the display was a show of “military transparency”.

“China with strong military strength is conducive to curb the strategic impulse of external powers towards China,” he said.

A total of 188 military attaches from 97 countries were reportedly invited to watch the military display. 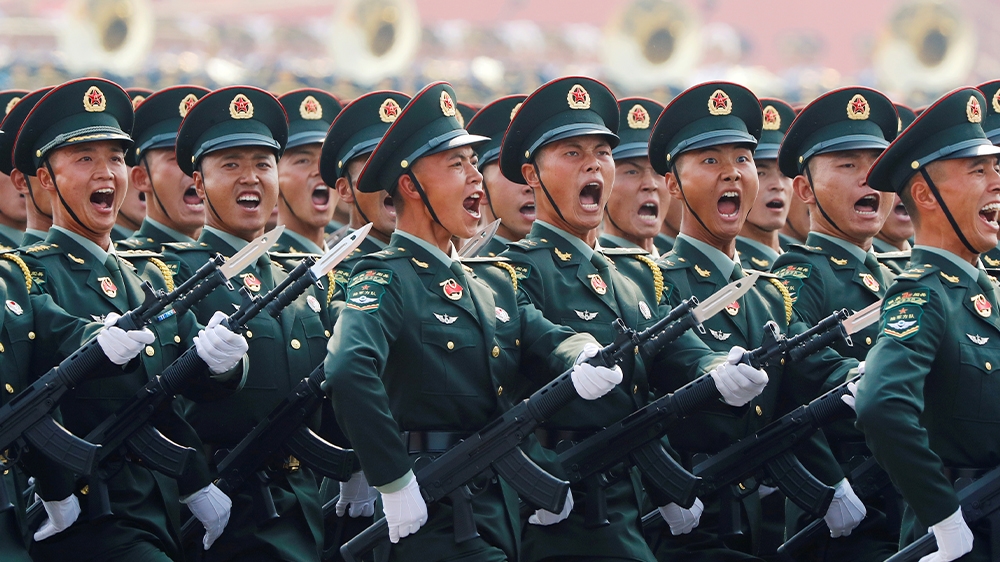 Iran sentences one person to death for spying for the US: Report

In IoJK more than 8000 Kashmiris were custodied, KMS revealed