Santiago, Chile –President Sebastian Pinera has said he will lift Chile’s state of emergency and begin a major cabinet reshuffle following historic protests against inequality across the country.

In the most substantial response to more than a week of countrywide unrest, Pinera called on his ministers to resign on Saturday.

“I have put all my ministers on notice in order to restructure my cabinet to confront these new demands,” he said.

Pinera told reporters at the presidential palace that he plans to end the controversial state of emergency on Sunday.

“It is my intention that we start the week with full constitutional normality,” he said.

Meanwhile, the military curfew will be lifted in the capital and other major cities across the country – a curfew that was largely ignored when more than one million people took to Santiago’s streets on Friday to call for social and economic reforms.

Pinera had declared a state of emergency on October 18 after volatile demonstrations, vandalism and looting. The decusion led to military and armoured vehicles being deployed on the streets three decades after Chile’s brutal military dictatorship.

Although the unrest has turned violent at times, the country has seen largely peaceful protests against inequalities, sparked by a rise in Santiago’s metro fares earlier this month.

More than a million have since rallied together against expensive education and private healthcare, poor pensions, wage stagnation and a public health system in crisis.

The president asked for congress to approve the new social reforms his government announced earlier in the week, including a minimum wage of 350,000 pesos ($481) and a basic pension increase of 20 percent.

The cabinet reshuffle is expected imminently. Justice Minister Hernan Larrain told reporters ministers “are all at the disposal of the president”.

“It is essential that the government and the president can lead and create a new normal in the country,” he said.

On Saturday morning, as Santiago recovered from the Chile’s biggest protest in recent history, there was a feeling of hope as volunteers helped clean the streets. A string orchestra performed for locals and passersby in Plaza Italia, the centre of recent unrest.

“We are seeing a beautiful Santiago, this is a historic moment,” one onlooker said.

With demonstrations and impromptu concerts expected to continue, it’s not clear whether the president’s words are enough to answer the calls of Chileans. 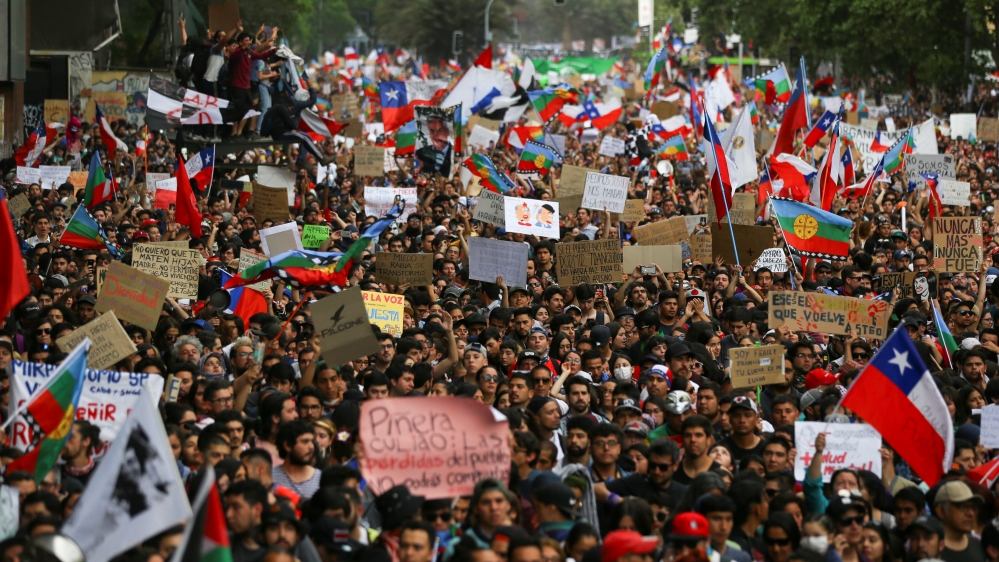 Many of the protesters on Friday held signs calling for the resignation of both the president and interior minister Andres Chadwick, who is also Pinera’s cousin.

“We’re here for the same cause: health, education. I don’t want my mother to die waiting to get treated in a public hospital,” said Noemi Hernandez, a 20-year-old student and protester.

“This is like a revolution; we’re all here on the streets … grandparents, kids. There are no colours of football teams, no colours of skin. We are all together for the same cause.”

Many Chileans are also waiting for answers to allegations of human rights abuses by police and military personnel against demonstrators. During the week, some protests have been violently repressed with tear gas, water cannon and plastic bullets.

Currently, 3,162 people have been detained, more than 300 of whom are minors, according to the national human rights commission (INDH). At least 19 people have died during the unrest, and a team from the United Nations is due to arrive on Monday to investigate alleged abuses.

“Now Pinera wants us to approve his agenda without listening to the people who have rejected it. It is no coincidence that his announcements comes days before the UN arrives in Chile to assess the damage,” Geri Miric at the London School of Economics’ Institute of Global Affairs, told Al Jazeera.

“He is, of course, keen to impose ‘normality’ from Monday, continue with life as normal and hide all traces of the serious violations to human rights during the protests. He needs to resign, sack his cabinet so that the country can begin the reforms necessary to get our democracy back,” she added.

Shots fired in Lebanon’s Tripoli as army clashes with protesters

One month on: Protests in Chile persist despite gov’t concessions