Santiago, Chile – About 1,000 women dressed in black, carrying flowers marched silently through Santiago’s streets on Friday, calling for justice for the nearly two dozen people who have died, and thousands more who have been injured during the volatile unrest that has gripped Chile for two weeks.

The “march of silence” kicked off another day of major protests against inequality across the country, as Chile’s government struggles to handle a historic social uprising that was sparked by a rise in Santiago’s metro fares in October.

More than 20,000 people took to the streets surrounding Plaza Italia in central Santiago on Friday afternoon, while thousands more marched on cities across the country, just one week after the capital witnessed a protest of more than a million people. 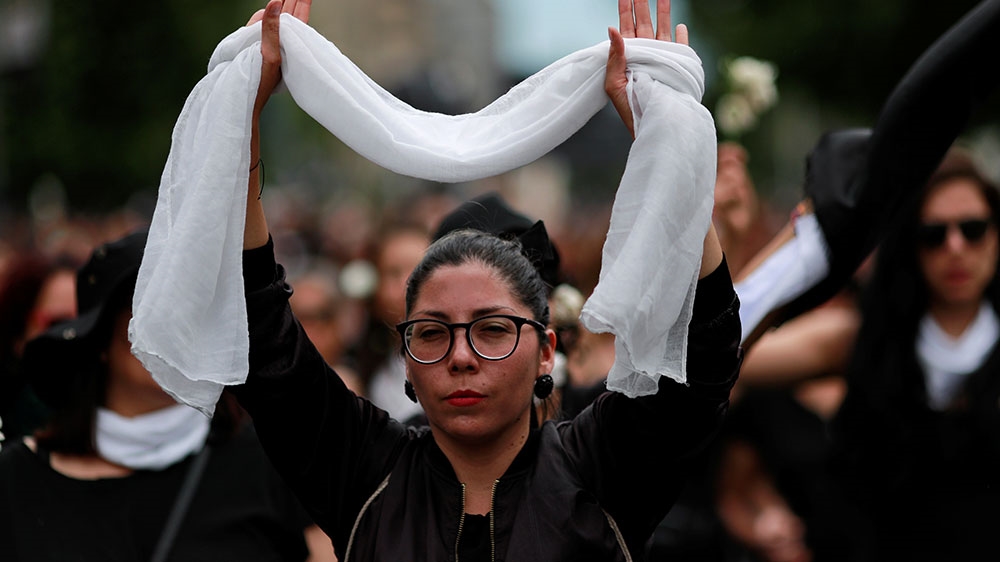 A woman rises up a white scarf as she takes part in a march to pay tribute to people killed during the protests against Chile’s government, [Henry Romero/Reuters]

“This is not going to stop,” said 29-year-old English teacher Sebastian, who wished to only give his first name. “Today is a bank holiday in Chile, but you see all these people here, they don’t care about the holiday, all they want is dignity, a new life.”

‘Living on the edge’

Protesters are calling for drastic social and economic changes in one of Latin America’s most unequal countries.

Many are furious over poor pensions, the almost complete privatisation of healthcare and education, a widening gap between rich and poor, low wages and the high cost of living. Calls for the resignation of president Sebastian Pinera have now become louder chants for a new constitution. The current one was written during the 17-year military dictatorship of Augusto Pinochet.

Pinera has tried to appease protesters by ending the state of emergency and military curfew, which was a painful reminder of Pinochet’s regime. Earlier in the week Pinera announced a cabinet reshuffle alongside new social reforms, including a 20 percent rise in basic pensions, and a monthly minimum wage increase from $413 to $481.

But for many Chilean protesters, the planned reforms just scratch the surface of what the country needs. 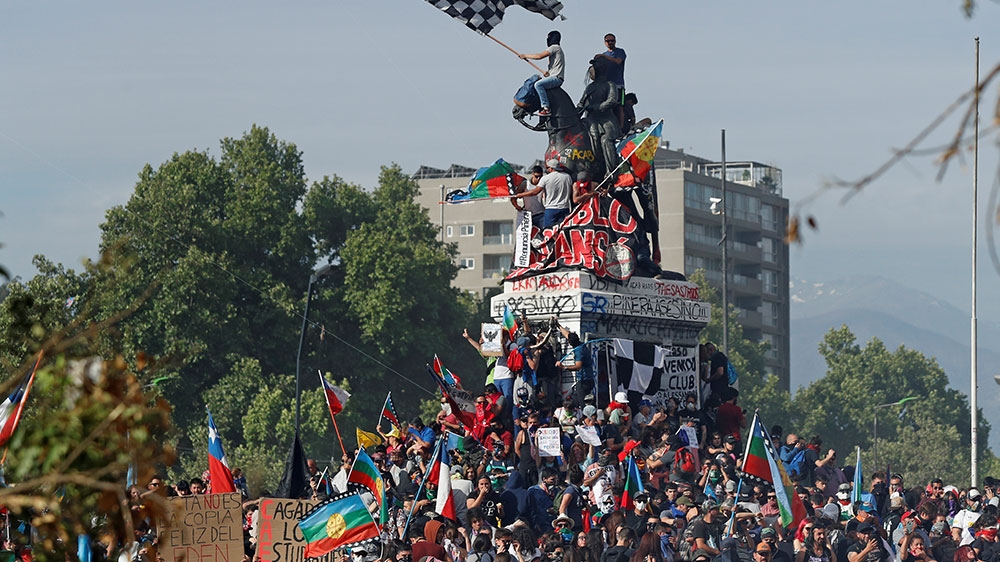 Demonstrators climb a statue during a protest against Chile’s government in Santiago, Chile [Jorge Silva/Reuters]

As the marches continued in full force, Pinera backed out from hosting two major international conferences, the APEC trade summit and the COP25 climate change meeting. The president said it was a “painful decision”, but his government needed to “prioritise re-establishing public order”.

But teacher Sebastian said protesters are “telling the Chilean government that things are not ok”.

“We need serious improvements in society,” he said. “I have come here almost every day since this started and I intend to come here until we get the new constitution.”

Saladin Meckled-Garcia, a senior lecturer in political science at University College London, said the protests showed that people are “suddenly waking up to their conditions and the fact that people in power aren’t doing anything about them”.

“While Chile is more developed than other countries in the region, and economy quite powerful, that doesn’t translate into standards of living,” Meckled-Garcia told Al Jazeera. “There isn’t a foundational safety net in society that protects people from falling through. People suffer, and the cost of living is continuously rising. They are living on the edge.”

‘This is social justice’

Nelly Meza, who stood in Plaza Italia banging a pan in a “cacerolazo” protest alongside her husband and son on Friday, said that the government “has done nothing”.

“So far their response has been like an aspirin, but Chile doesn’t need a tablet, it needs real change,” she said.

Meza and her husband had to sell their house to be able to pay for their son’s healthcare when he was diagnosed with cancer.

“This is not political. This is social justice,” she said. 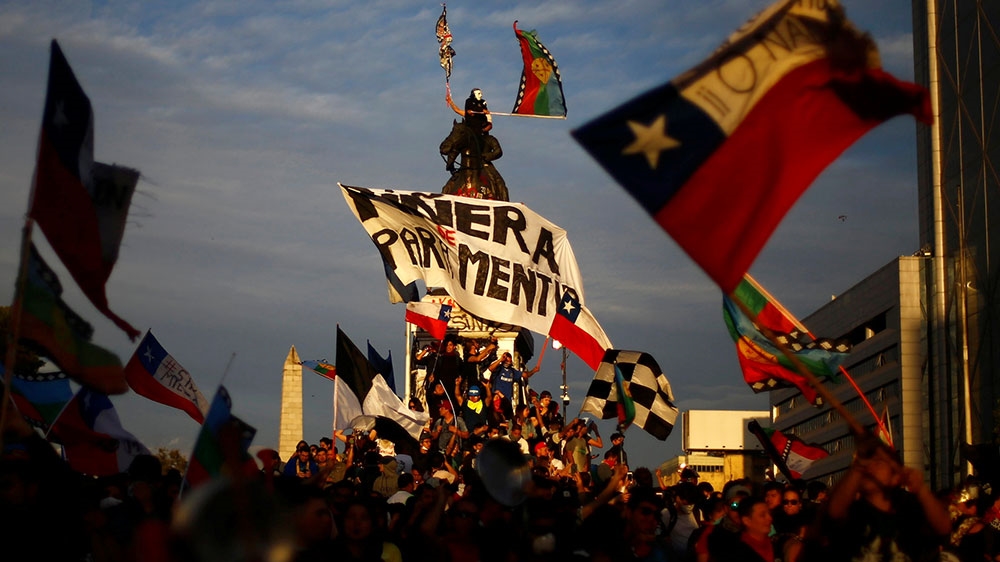 Demonstrators wave flags and banners during a protest against Chile’s government in Santiago, Chile [Edgard Garrido/Reuters]

Charlie, Meza’s 19-year-old son, who is now studying nursing, said: “If we don’t keep fighting and moving to the streets, this won’t go anywhere. But if we organise, we can go forward, and we can change the reality of the country.”

The crowd of peaceful protesters in central Santiago on Friday waved flags bearing the sign of the Mapuche indigenous community and the national colours. The police helicopter overhead was deafened by the whistles and chanting on the street, as demonstrators jumped along to cries that Chile has “woken up”.

But the bandanas covering the faces of the demonstrators, including families and children, were a reminder of the darker side to this unrest.

People ate lemons or doused their scarves in water with baking soda to stem the effects of teargas, as a constant stream of gas canisters were thrown into the crowd by nearby police vans. 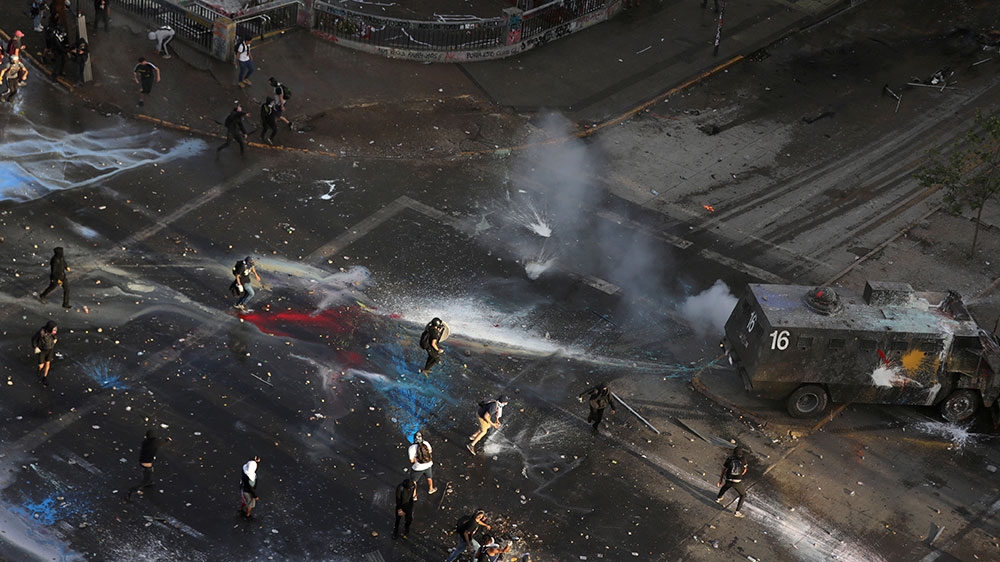 Demonstrators clash with riot police during a protest against Chile’s government in Santiago, Chile [Pablo Sanhueza/Reuters]

At least 20 people have died in the unrest, with more than 1,000 people currently in hospital due to pellet and rubber bullet wounds. Thousands have been arrested.

The country’s human rights institute, the INDH, has so far filed 167 judicial cases against armed forces over violence including sexual assault and torture.

UN investigators arrived earlier this week to probe the rights abuse allegations. Chilean officials, including the president have welcomed their presence, saying they “have nothing to hide”.

Meanwhile, protesters have said they will continue to take to the streets until “the very end”.

“At first [the government] thought everything was going to change when the military was going to the streets,” said teacher Sebastian, his eyes wet from tear gas. “But people were not afraid of them. You see that Chilean society has woken up. And we want them to know that we will be here until the very end. We’re not scared. We are all united, because this is something that affects everyone in Chile.”

Medical News Today: Symmetric vs. asymmetric arthritis: What to know