Santiago, Chile– Unrest continued to sweep across Chile on Friday as the country reached the seventh day of furious protests over inequality and the rising cost of living.

The week-long uprising has left at least 18 people dead, including a child, with five people killed at the hands of the armed forces.

The United Nations confirmed on Friday that a team of investigators will arrive in the country next week to begin probing allegations of human rights abuses against protesters, following criticism of the state’s often violent response to demonstrations.

Michelle Bachelet, the UN’s high commissioner for human rights and former president of Chile, said she was “deeply saddened” by the situation.

She tweeted on Thursday that “having monitored the crisis from the beginning” she decided “to send a verification mission to examine reports of human rights violations in Chile”.

Although demonstrations have been tainted by violence, looting and vandalism, many peaceful protesters have also faced forceful repression by the state, rights groups say. 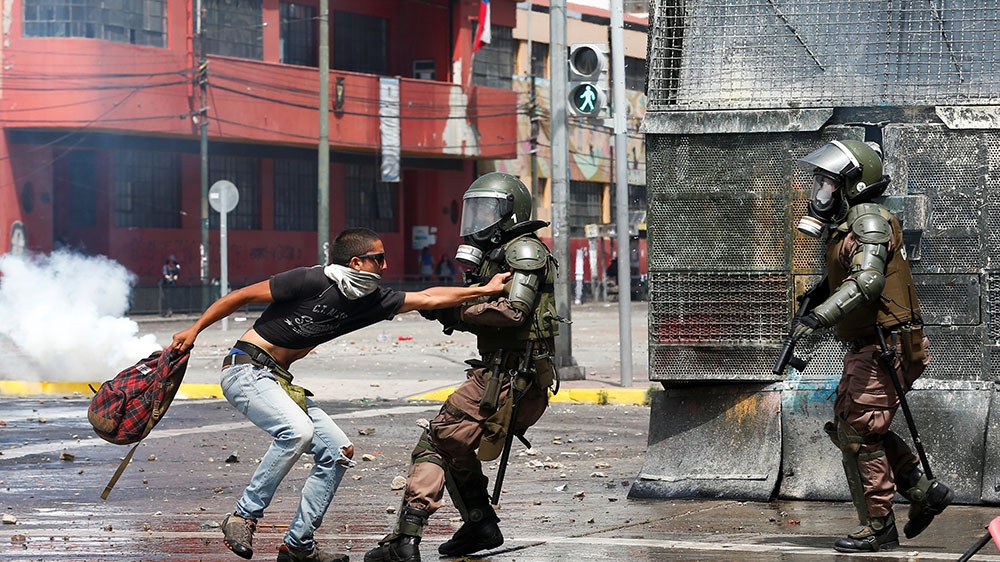 A demonstrator clashes with a member of the security forces during a protest against Chile’s state economic model in Valparaiso, Chile [Rodrigo Garrido/Reuters]

What started as a campaign against a 0.30 peso ($0.04) hike in metro fares last week has exposed deep wounds in a nation often considered to be Latin America’s most stable country.

Hundreds of thousands of Chileans have marched across cities and towns throughout the country against the high cost of education and healthcare, wage stagnation and low pensions.

On Friday, Santiago’s air remained heavy with tear gas, which has been used by police to attempt to disperse protesters. Peaceful demonstration earlier this week were broken up with water cannon, while video footage circulating on social media showed demonstrators being shot with rubber bullets at close range, or being physically attacked by police.

The INDH said it had compiled 67 legal cases related to five homicides, and 12 alleged instances of sexual violence by police and military personnel, including being forced to undress, threats of rape, and physical harassment.

A special prosecutor has been appointed to investigate alleged human rights violations in 13 districts of Santiago.

The Inter-American Human Rights Commission (IACHR) has also said it will convene on 11 November in Ecuador to assess the alleged abuses.

The commission’s vice president described the situation as “critical”.

“We are very concerned for the situation going on,” IACHR Commissioner Joel Hernandez said. “The response by the state should only be under strict international standards, under the principles of proportionality and restrain. We are observing […] an excessive use of force.”

Teodoro Ribera, the minister for foreign affairs, confirmed on Thursday that the president had invited the UN commission to investigate the situation in Chile.

“We are interested in maximum transparency and that all necessary safeguards are taken,” he said. 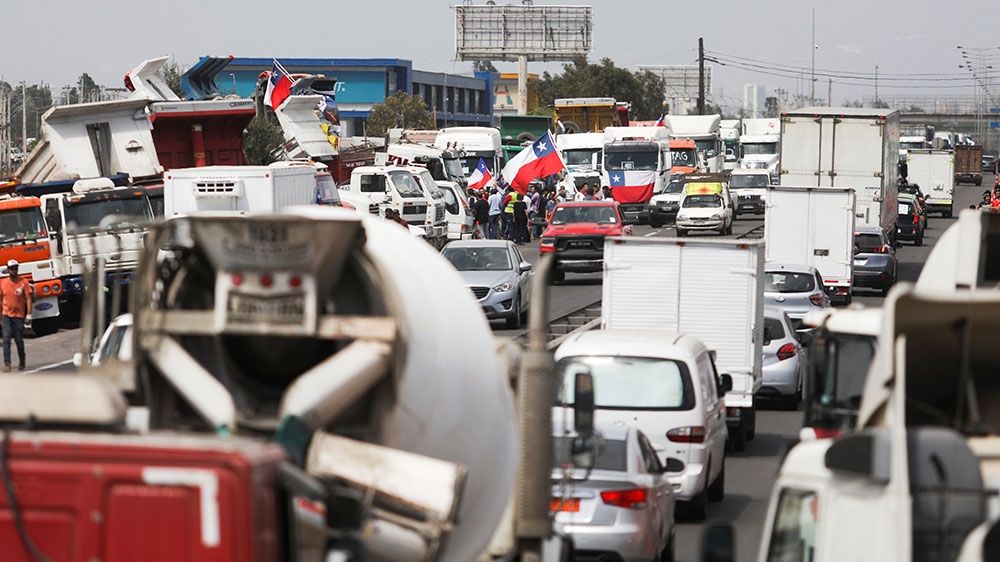 Vehicles are seen driving past a demonstration against toll charges in a roadway on the outskirts of Santiago, Chile [Pablo Sanhueza/Reuters]

No end in sight

President Sebastian Pinera, who has declared a state of emergency over the protests, tried to appease demonstrators earlier in the week by apologising for his “lack of vision” and announcing a package of reforms. His proposals include increasing the basic pension by 20 percent, and introducing a minimum wage of 350,000 pesos ($482). He also pledged a tax rise on high earners and a reversal of a recent 9.2 percent hike in electricity bills.

But the president’s words have fallen flat in Chile’s capital, with many protesters saying the measures do not go far enough for a crisis this severe.

Sixteen cities have been put under military-enforced curfew at night. Graffiti and posters on the walls of Santiago called for the president to resign.

There appears to be no sign that the unrest will end soon. Truckers staged a strike on Friday over private highway tolls. Protesters are also scheduled to rally in the capital on Friday afternoon in what is expected to be the biggest demonstration to date.

“The repression we’re living won’t pass until he gets military off the street. Many people are very scared, but the worst of all the fear I have isn’t as bad as the psychological fear of my parents and grandparents who lived through the dictatorship,” said Camila Dilas, a 27-year-old marching on Santiago’s streets, referring to the 17-year dictatorship of Augusto Pinochet, which ended in 1990.

“I want this inequality to end. Finally we’ve woken up and I feel happy that Chile has opened its eyes. These protests will last until Pinera resigns.”

‘All of them’: Lebanon protesters dig in after Nasrallah’s speech

Indian faces trial for spying on Sikhs, Kashmiris in Germany

Hydroxychloroquine not beneficial for coronavirus, WHO halts trials