Chilean President Sebastian Pinera on Wednesday pulled out of hosting the Asia-Pacific Economic Cooperation (APEC) summit and COP25 climate meeting due to continuing protests over inequality in the country.

Pinera said the decision was “deeply painful” but after nearly two weeks of street protests, Chile has decided it was not in a position to host either the November 16-17 trade summit or the December 2-13 climate convention.

Protesters have taken to the streets in large numbers across the country since early October. What started as a protest against a metro fare hike has since ballooned over concerns of rising inequality.

Pinera’s concessions, which include a package of social reforms and a partial cabinet reshuffle, have so far failed to satisfy protesters, who have demanded he resign and for a new constitution to be formed. 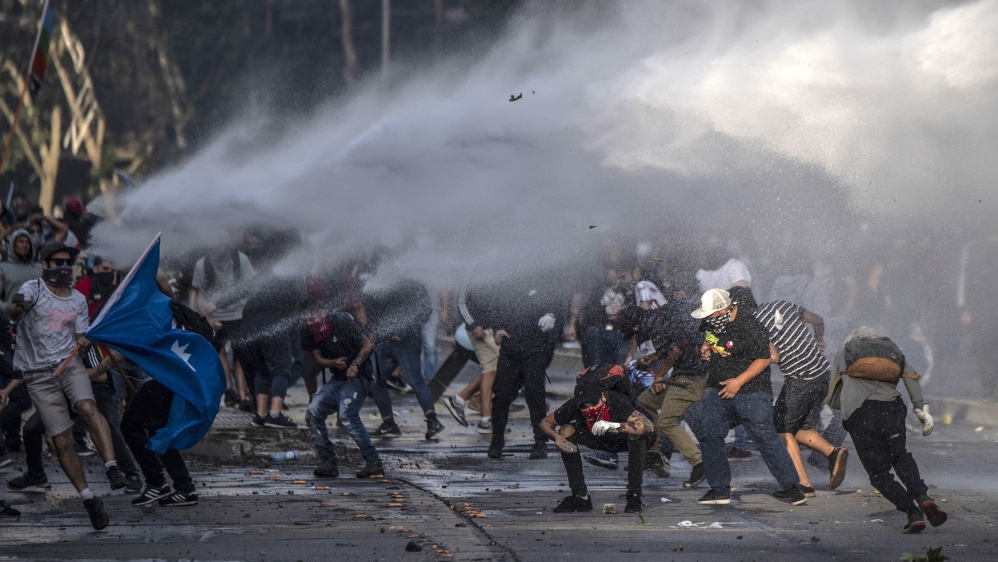 Demonstrators clash with riot police during protests against the government economic policies, in the surroundings of the Moneda presidential palace in Santiago [Pedro Ugarte/AFP]

This is the worst unrest the country has witnessed since the 17-year-long dictatorship of Augusto Pinochet, which ended in 1990.

At least 19 people have been killed and hundreds injured. Thousands have also been detained.

Responding to pressure, Pinera on Sunday lifted a state of emergency that allowed military forces on the streets. A heavy police presence remains, however.

A team of UN investigators arrived in Chile earlier this week to probe allegations of rights abuses. Pinera welcomed the team, saying “we have nothing to hide”.

The demonstrations have been accompanied by some vandalism and arson, which forced the shutdown of numerous subway stations.

UN Climate Change Executive Secretary Patricia Espinosa issued a statement saying that “alternative hosting options” were being explored for the climate conference. And a UN official, speaking to the Associated Press on condition of anonymity for lack of authorisation to comment publicly, said that all UN venues are being considered as options. Those would include cities such as New York, Geneva, Bonn, Vienna and Nairobi.

The Santiago conference was meant to work out some of the remaining unresolved rules for countries on climate efforts, smoothing the way for the bigger effort in the 2020 summit: encouraging countries to up their commitments to cutting climate-changing emissions.

Even if cancelling the Santiago climate conference means those rules don’t get written this year, “the absence of rules does not stop countries from acting either alone or together” to cut emissions, said Nigel Purvis, a climate and environment negotiator in the Clinton and George W Bush administrations. “It really shouldn’t slow down climate action.”