Santiago, Chile– More than one million people took to streets in the Chilean capital of Santiago on Friday afternoon, uniting in a call for huge social and political change in the country.

In an extraordinary day for Chileans, the capital was brought to a standstill after a week of widespread and at times violent unrest over inequality.

The demonstration is believed to be the largest in decades, drawing comparisons to historic marches in 1988 against the military dictatorship of Augusto Pinochet.

“This is really emotional, the fact that we are all together, this is a very new thing for Chile,” said Camilo Godoy, surrounded by chants of “Oh, Chile Desperto” (Chile woke up).

Friday’s marches were the climax of a weeklong unrest sparked by a student protest over the rise in Santiago’s metro fares.

The student campaign catalysed into countrywide protests, with people furious over inequality and the nearly complete privatisation of healthcare and education, the high cost of public services such as transport, on top of low wages and poor pensions.

Throughout the afternoon the streets leading up to Plaza Italia, the heart of Chile’s demonstrations, filled with people and the sounds of banging pots and pans (the traditional cacerolazo protest).

People of all ages and classes joined together to the beat of pans and drums. Music groups started impromptu concerts in different areas of the streets, squeezed between thousands of other demonstrators dancing and jumping in unison.

“The dictatorship divided us, but here you can see everyone, Mapuche [indigenous group], feminists, migrants, sexual diversity, young children. It’s everything. No one is missing today,” Godoy added. 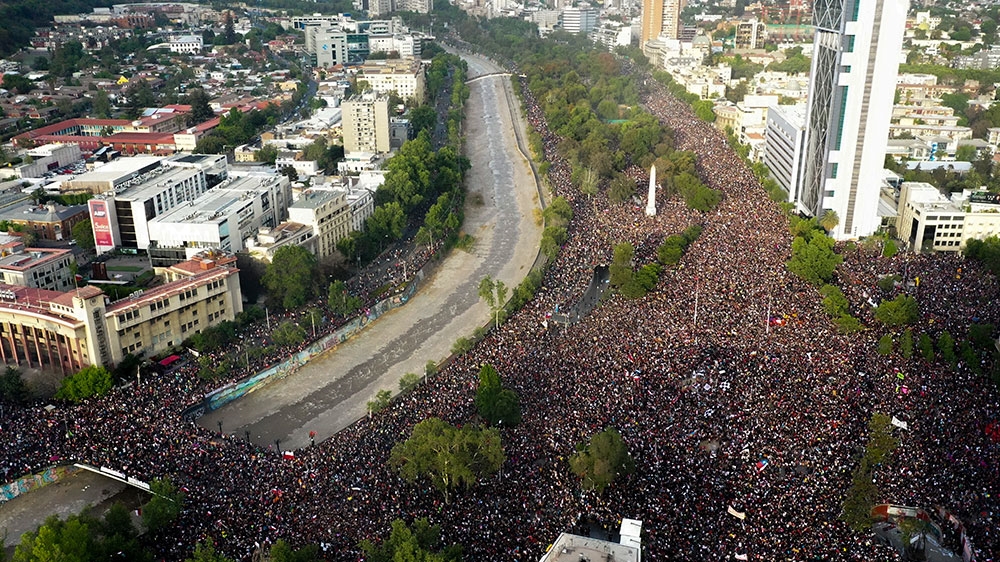 In this aerial view, thousands of people protest in Santiago [Pedro Ugarte/AFP]

At one point, thousands of protesters sang a song of Victor Jara together, “The right to live in peace”. The songs of the Chilean singer-songwriter who was killed during Pinochet’s dictatorship have become a soundtrack to the movement.

The streets were coloured with the red, white and blue of the Chilean flag, a symbol that today united all sectors of society.

“It has become a symbol of liberty, rebellion. Today it means we are all together fighting for our rights,” Godoy said.

“I’ve never seen anything like this,” said 72-year-old Maria Angelica Sanchez, who was marching with her younger sister. “I am very excited, very encouraged by the young people.”

Her sister, Isabel added: “We are of the generation that began our lives in the dictatorship, and we had no youth. We lost friends, we saw people slaughtered. We lived with fear, but now the young people have blossomed, they have lost that fear.”

‘We have heard the message’

Chilean President Sebastian Pinera on Friday night said he had “heard the message” of demonstrators.

He tweeted: “The massive, joyful and peaceful march today, where Chileans ask for a more just and supportive Chile, opens great paths for the future and hope. We have all heard the message. We have all changed. With unity and help from God, we will walk the path to a Chile that’s better for everyone.”

Pinera and his cousin, Interior Minister Andres Chadwick, have been heavily criticised over the handling of the unrest, which has seen at least 19 people killed, and more than 3,100 detained. 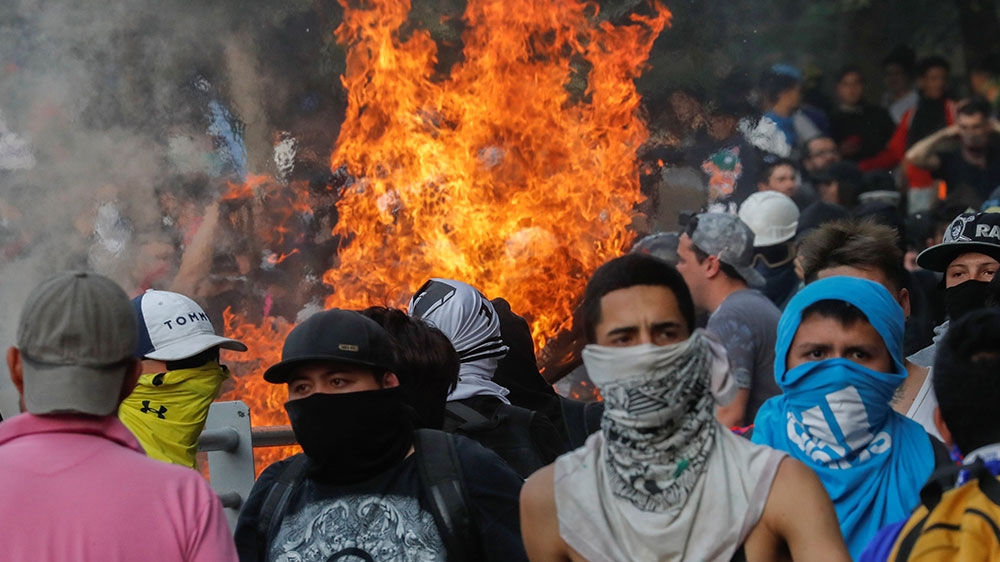 Demonstrators are seen near a fire during a protest against Chile’s state economic model in Santiago, Chile [Henry Romero/Reuters]

Many peaceful demonstrations were heavily repressed by armed forces, while military-enforced curfews remain in 12 regions.

The sight of the military on the street also brought back painful memories to a country that lived under a brutal dictatorship for 30 years.

The protest against the 30-peso ($0.04) rise exposed deep divisions in a country marred by inequality and the rising cost of living, with many people sharing the slogan: “It’s not 30 pesos, it’s 30 years”.

Although Chile is believed to be one of Latin America’s most stable countries, it has one of the highest levels of economic inequality in the developed world.

Many protesters are now calling for a new constitution. Pinochet’s regime from 1973 to 1990 rewrote the country laws and economic policies. This legacy remains today. 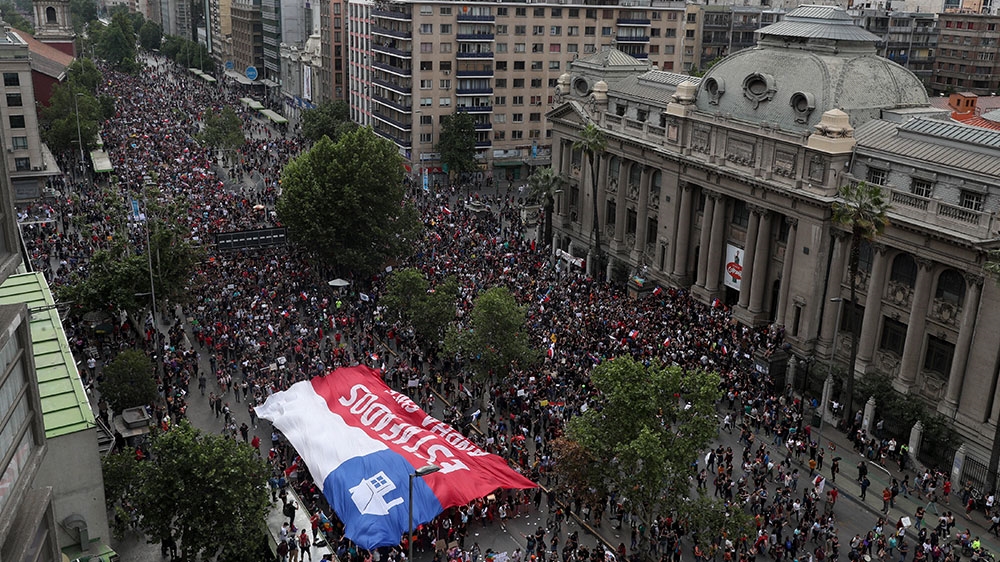 “I hope this will be an opportunity to review the big injustices they have never addressed,” said Cristin Correa, a senior expert at the International Centre for Transitional Justice.

“Our political system over the last 30 years has been musical chairs, we have a tendency to be governed by elites that are out of touch, but now there is a generation that is not willing to go along with that,” Correa told Al Jazeera.

As night fell, hundreds of motorbikes sped through Santiago, beeping horns and revving engines. Onlookers cheered and waved, as the sky turned a deep pink with the setting sun.

“I feel happy because I feel we can build a new just society,” said 55-year-old protester Luis Solis. “This is Chile’s spring.”

Do stress-related disorders raise the risk of infections?

UN top court says it has jurisdiction in Ukraine-Russia case