Catalonia should hold a new vote on independence from Spain within two years, the head of the region’s government has said, in a fresh challenge to Madrid following days of unrest by pro-separatist protesters.

Quim Torra’s comments in parliament on Thursday came as thousands of students took to the streets of Barcelona in protest over the Supreme Court’s decision to jail separatist leaders for their role in a 2017 referendum that Madrid deemed illegal.

“If all parties and groups make it possible, we have to be able to finish this legislative term by validating independence.”

Tensions in the semi-autonomous region have reached fever pitch since Monday, when Spain’s top court found nine politicians and activists guilty of sedition and sentenced them to up to 13 years in jail.

The leaders had declared independence from Spain following the banned referendum, prompting the Spanish government to immediately seize control of the Catalan administration and arrest the ringleaders.

The sentences against them prompted violent protests, with demonstrators setting fire to cars and garbage cans. Authorities said 97 people were arrested and nearly 100 people were injured in the unrest.

Barcelona town hall estimated that the city had suffered damage of more than 1 million euros ($1.1m) in the first two nights of the protests.

Torra criticised the rioting in his address to Parliament on Thursday, saying the separatist cause was a peaceful movement. But he also pushed the case for forging ahead with the stalled secessionist drive, saying Monday’s sentences would not deter a new vote on independence.

But he acknowledged that he can only move forward with a fresh referendum if his coalition partners back it. The call for a new referendum came despite Spain’s Constitutional Court warning Catalan officials of legal consequences if they broke the law by pursuing independence. 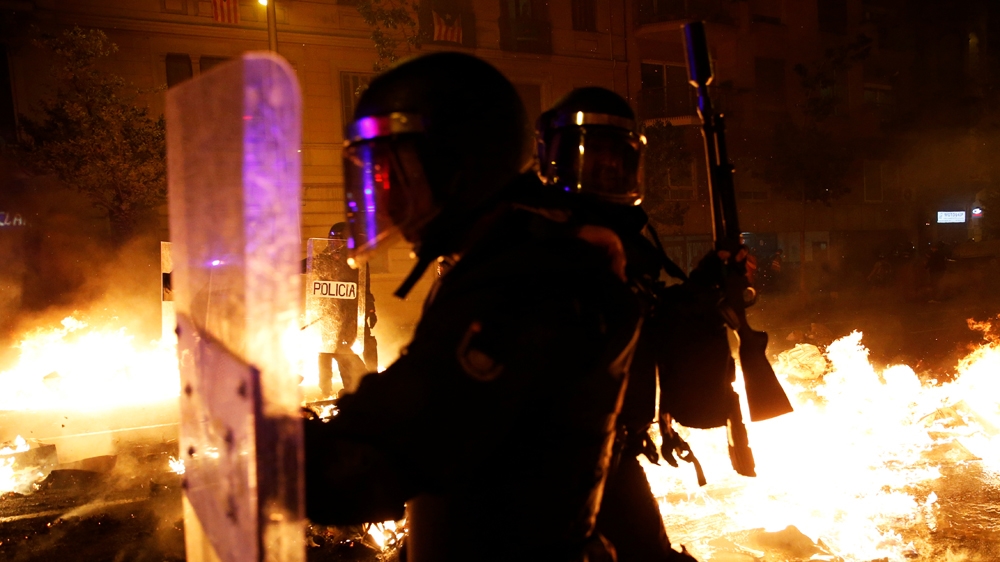 Sergi Sebria, a spokesman for the separatist Esquerra Republicana de Catalunya party, said now was “not the moment to lat down dates … but rather to achieve consensus”.

Independence is a highly divisive issue in Catalonia, a wealthy region of 7.5 million inhabitants, who have their own language, parliament and flag. A poll in July showed backing for secession in the region was at its lowest level in two years, with 48.3 percent of people against and 44 percent in favour.

Spanish Prime Minister Pedro Sanchez appealed to Torra to prioritise the security of the Catalan people.

“Millions of people live in Catalonia and they have the right to live securely and in peace, the right to their own political ideas, but that is incompatible with the conduct of violent groups who put at risk the peace of their cities, the properties of their neighbours and the safety of citizens,” he told reporters at a press briefing on Thursday.

Meanwhile, more than 25,000 students were gathered outside Barcelona’s city hall, with some protesters insulting police officers and throwing eggs and toilet paper at them.

Eduard Salinero, a 21-year-old physics student who is in favour of separatism, said many people who want Catalonia to remain a part of Spain back the protests “because they feel it is totally unfair to send our elected politicians to jail.”

Activists also blocked several roads across Catalonia by burning tyres while the commuter rail service in Barcelona was intermittently disrupted due to demonstrators on the tracks, officials said.

Several roads and highways were also blocked off due to the mass marches which departed on Wednesday from five Catalan towns heading for Barcelona. The protesters are expected to converge on the city on Friday. A general strike is due to begin on the same day.

Fernando Grande-Marlaska, the interior minister, said security reinforcements would be sent to Barcelona. There would be “no impunity” for those involved in the violence, he said.

Adopted in 1978, Spain’s constitution states the country is indivisible and grants the national government exclusive power to hold referendums.

The country’s main parties have consistently rejected calls for an independence referendum in Catalonia, although the ruling Socialists say they are open to dialogue on other sources of tension between Barcelona and Madrid.

The Catalan question has dominated domestic politics in the country and was instrumental in triggering parliamentary elections in April.

The Socialists have called for a fresh national election next month, the country’s fourth in as many years.

Brexit deal: All the latest updates