For the past two weeks, Zonalia Santos and her neighbours have spent their days trying to save their houses and crops from the large forest fires in the western Brazilian state of Rondonia.

Santos lives in a settlement with 35 other families and although they managed to save their homes, she tells Al Jazeera “the fire touched almost everything else”.

“We spent the whole day fighting the fire ourselves, but it took pastures, bushes,cacao crops, wood, nuts or acai berries,” she says. Santos and her family depend on growing cacaoto produce chocolate, from which they make about $100 a month. She says they were lucky that the fire did not get to their crops, but “some families lost everything”.

“The damage is irreversible. At some point, when we were putting out the fire, we started crying because it is so sad that we protect so much to then see everything destroyed by a fire,” she says.

Brazil’s northern and western regions have experienced an 83 percent increase in the number of fires in the first eight months of 2019 compared with the same time period last year, according to Brazil’s space research centre INPE. Its satellite system detected 72,843 fires in the region this year. The states of Amazonas, Rondonia, Acre, Para and Mato Grosso do Sul were some of the most affected, and most of the burning happens inside the Amazon rainforest. In just a week, 9,507 new fires were detected in the world’s biggest rainforest, commonly referred to as the “planet’s lung”. 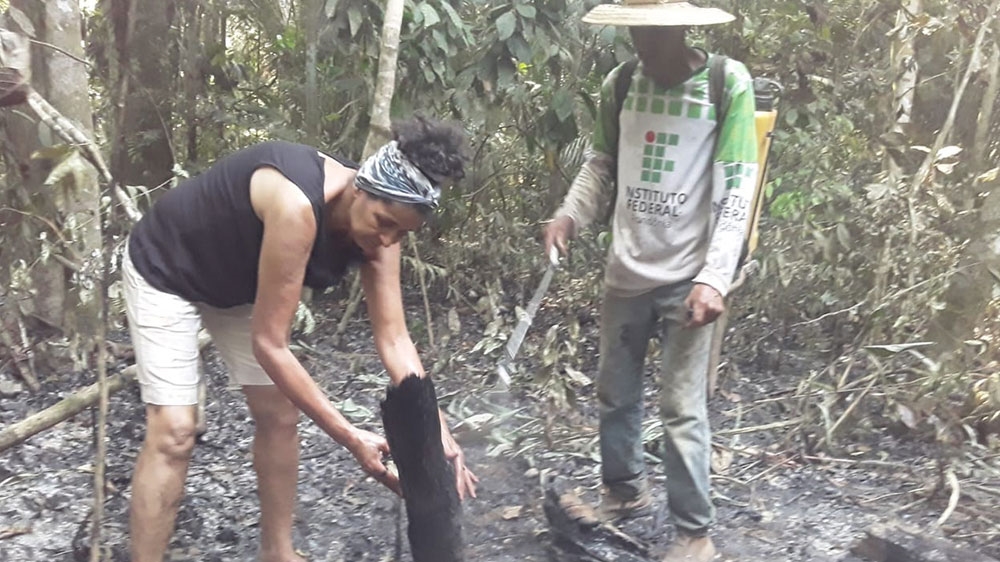 A thick cloud of smoke travelled across the continent, forcing flights to be cancelled and many to be hospitalised due to respiratory problems. In Sao Paulo, residents were surprised when they saw the sky turn dark in the middle of the day, although the city is 2,500km away from the origin of the fires. The state of Amazonas declared an emergency in its capital of Manaus on August 9 and the state of Acre, bordering Peru, also put out an environmental alert on August 16.

Online, thousands used #PrayForAmazonia to denounce the fires, which many say are consequences of President Jair Bolsonaro’s anti-environmental policies.

This is São Paulo at 4 p.m., completely dark. Solar eclipse? No, it’s the black smoke covering the city from the burning Amazon. It has been burning for 3 WEEKS.
The Amazon forest provides the earth with 20% of oxygen, and now that 20% is gone.#PrayforAmazonas pic.twitter.com/G6ptfqYRBf

Start of the fires

On Wednesday, Bolsonaro responded to claims he was “setting the Amazon aflame”, noting the country is going through its dry season and claiming the fires “could have been set by NGOs” to damage his administration, an accusation environmental groups rejected. A day later, he attempted to clarify his remarks, saying he did not claim non-governmental organisations started the fires, he only suspected it, and that his government lacked the resources to fight the blazes.

Ricardo Salles, the minister for the environment said on Twitter that “dry weather, wind and heat caused the increase in fires across the country”.

Researchers from INPE, however, have rejected the government’s claim, saying that this year’s dry conditions in the Amazon were not “abnormal” and were not to blame for the enormous fires.

“The dry season creates favourable conditions for the use and spread of fire, but starting a fire is the work of humans, either deliberately or by accident,” INPE researcher Alberto Setzer told Reuters news agency.

Ane Alencar, director of science in the Amazon Environmental Research Institute (IPAM), tells Al Jazeera the record-high number of fires are actually connected with an increase in deforestation.

“We are not going to an extreme event of drought at the moment, we are seeing a very normal dry season. So what’s different is that we are seeing more deforestation and that causes more fire because the forest is more fragile, fragmented and sensible,” she tells Al Jazeera over the phone. 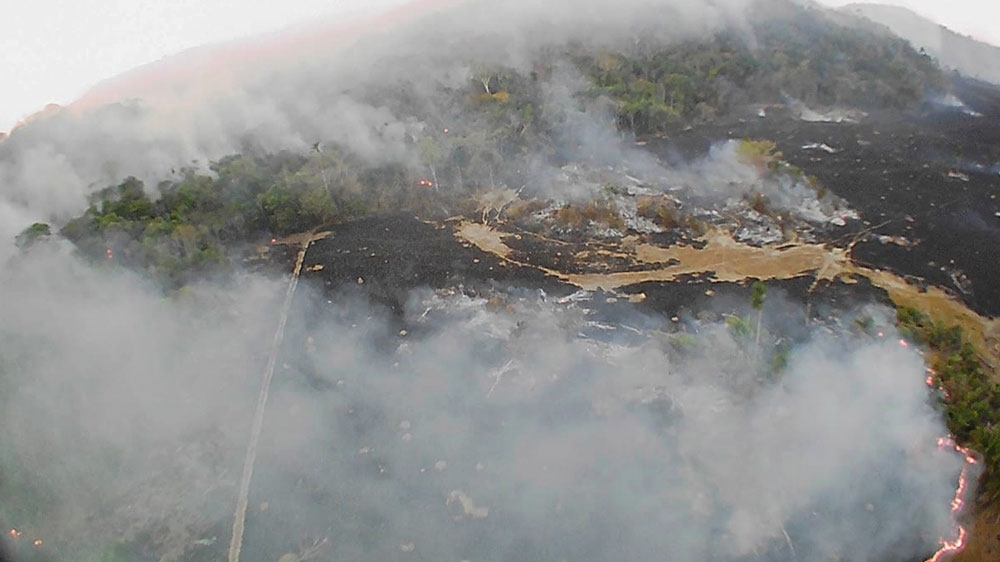 According to the Brazilian newspaper Folha do Progresso, the fires started on August 10 when an association of farmers in the state of Para announced a so-called “day of fire”. The idea, according to the publication, was to coordinate a number of simultaneous fires to show Bolsonaro “they are ready to work”. On that day, 124 new fires were registered by INPE and the next day 203 more were flagged.

The Public Prosecutor in the State of Para has opened an investigation into the incident.

‘I blame the government to this’

Bolsonaro has not shied away from marketing his pro-business vision for the Amazon, saying multiple times he supports opening the rainforest for mining and agriculture exploration. He is also outspoken about his anti-indigenous views, having said he would not “demarcate one centimetre more of native reserves” during his presidency.

“The situation here is terrible, from fires to invasions of indigenous lands and I blame the government for this,” says Ivaneide Bandeira, who is part of the Kaninde Association, which works to protect the environment and native groups in the state of Rondonia.

She tells Al Jazeera the “weather is constantly dark”, “hospitals are filled with people with respiratory problems” and “all indigenous reserves in the state have been affected”. She says she also wakes up in the middle of the night struggling to breathe.

“The situations is a thousand times worse than in prior years, you can’t even compare it,” she says. “The criminals are strengthened by this government’s words that they can burn, deforest and destroy the Amazon, while the administration weakens environmental protections and authorities.”

The Karipuna indigenous reserve is one of the many affected. Adriano Karipuna, who is part of the Karipuna tribe’s leadership, tells Al Jazeera that many of his relatives are suffering from “irritated throats, red eyes, cough and even the flu” because of all the smoke.

“My village still depends on hunting and fishing, now all the animals are running away and if we continue to lose trees, our river will eventually die,” he says. 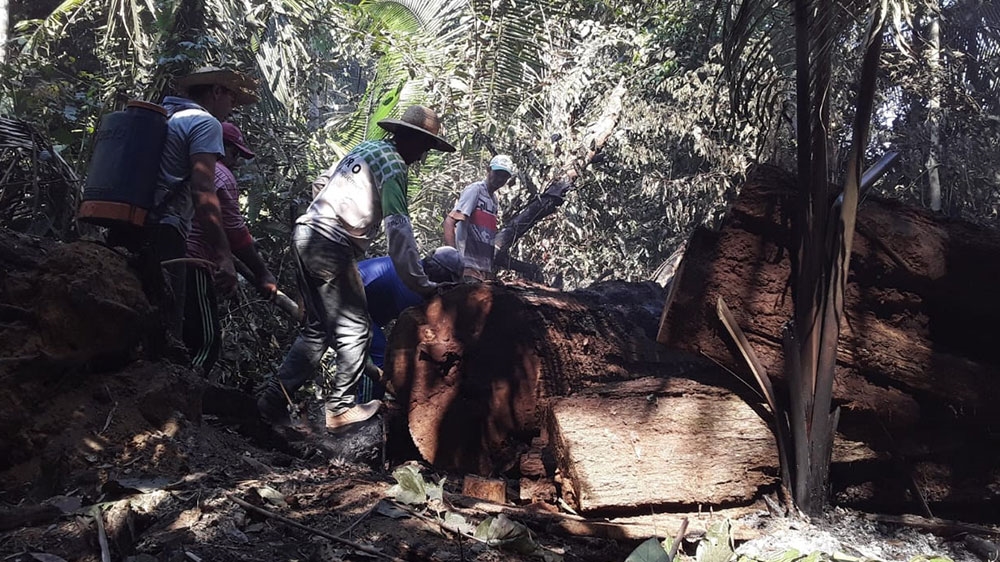 The most recent fires have entered at least 32 natural reserves and 36 indigenous lands, according to INPE. In the last few days, occasional rains gave some rest to the residents in nearby towns but the fear is far from over, says Santos in the state of Rondonia

Santos and her neighbours continue to monitor their land for any piece of incandescent wood or flying sparks that could start their nightmare once again.

“We can’t breath because of the smoke and we can’t sleep because we are afraid. Everywhere else is on fire, there is nowhere else to go,” Santos says. “It’s such a feeling of revolt because we know someone is to blame behind this.”

#Misbah is too safe & defensive, not ideal for team coaching : #RamizRaja

Crucial talks between the US and Taliban begin in Doha

Palestinians protest US settlement decision in ‘day of rage’

‘It was like judgment day’: Lebanese devastated by wildfires