Bolivian President Evo Morales accused his rivals on Wednesday of attempting a “coup”, after the opposition led three days of protests across the country, saying Sunday’s election was rigged.

With 97 percent of the votes counted, the official results showed Morales with 46.49 percent of the vote, 9.5 points ahead of his main rival Carlos Mesa – but still short of the 10 percent lead required to outright win and avoid a second-round election.

In a news conference in the administrative capital La Paz, Morales reiterated that he had won Sunday’s election outright and accused his rivals of orchestrating a coup.

“I have called this conference to denounce before the people and the entire world, that a coup d’etat is in progress, that that the right had prepared in advance with international support,” he said.

His remarks came after three days of rioting and protests across the landlocked Andean nation. Thousands of mostly young people who accused Morales of tampering with the votes, set fire to counting stations and ballot boxes. Security forces in riot gear responded by firing tear gas canisters. 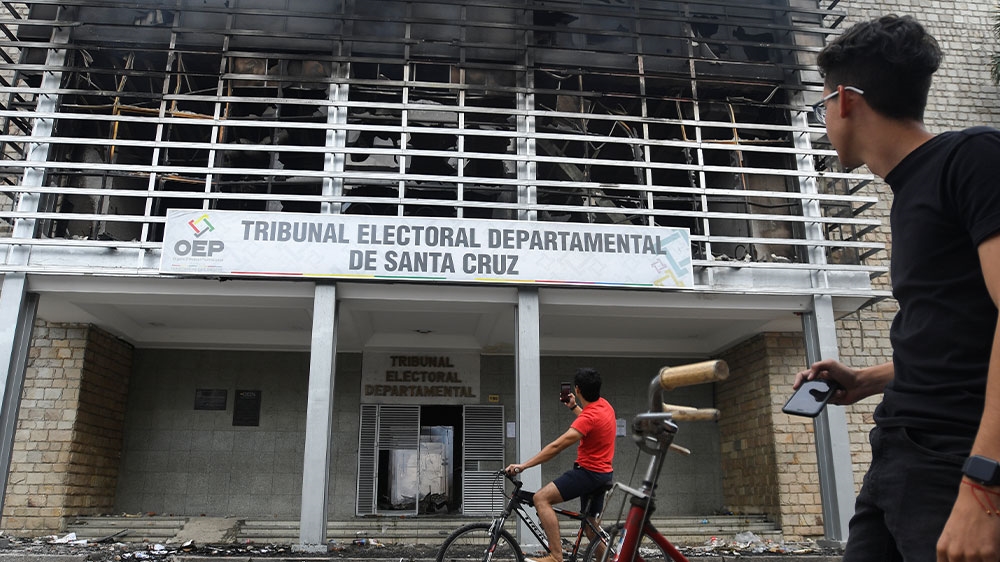 Exterior of the Electoral Tribunal building in Santa Cruz, Bolivia which was set alight by demonstrators during a protest [Rodrigo Urzagasti/Reuters]

A preliminary vote count late on Sunday indicated that the election was likely heading to a second-round runoff in December. The publication of results was then abruptly halted. When it resumed 24 hours later, the tally showed Morales with a wider lead, giving him just enough of a margin to win in the first round.

“Right at this instant only a few metres from us a giant fraud is being perpetrated that intends to have us believe that there won’t be a second round, lying to the country, turning their back on your vote, and robbing us of our popular sovereignty,” Mesa told a group of fiery protesters late on Tuesday.

On Wednesday, Mesa called for “permanent protests” until a second-round vote was determined, adding that his campaign would soon present evidence of election tampering. 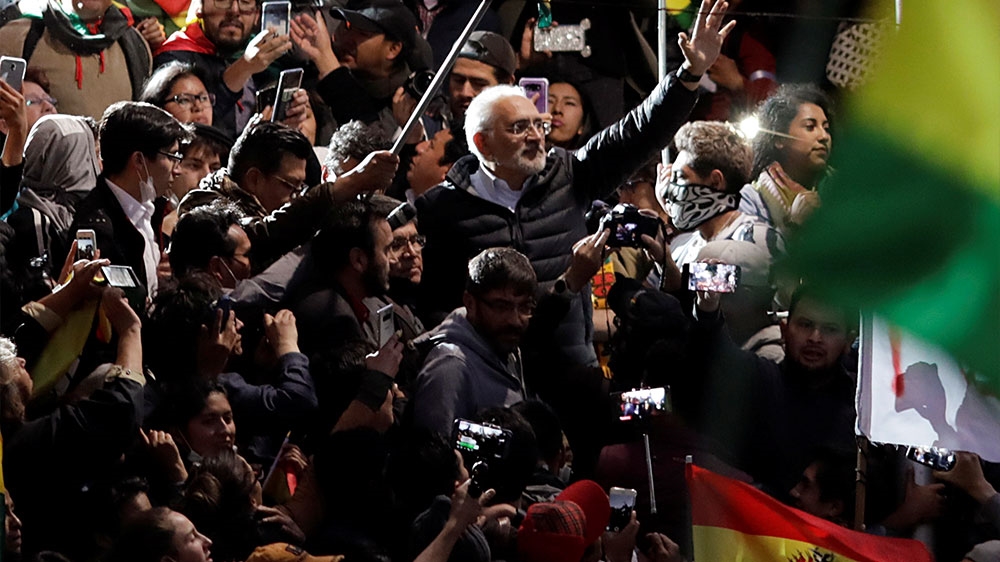 Morales, Bolivia’s first indigenous president and the country’s longest-serving leader, was first elected in 2006. He won landslide victories in 2009 and 2014 after bringing unprecedented economic prosperity to Latin America’s poorest nation. But this election, his fourth consecutive run, has been marred with controversy from the start.

A 2016 referendum ruled against the leftist leader’s proposal to extend term limits, but he petitioned the country’s highest court arguing that term limits violated his human rights. The court ruled in his favour.

The decision set off protests and strikes across the country, with opponents arguing the move was unconstitutional.

“What we are seeing is growing confrontation of deep distrust on both sides,” said John Crabtree, a researcher at the University of Oxford told Al Jazeera.

“Morales is implying that there has been a coordinated campaign in certain quarters to discredit the elections,” Crabtree told Al Jazeera. “And the opposition is alleging that the government never had much intention of relinquishing power.”

On Wednesday, the Organization of American States (OAS) held a special meeting on Bolivia, during which officials urged Bolivian authorities to hold a runoff election, given the “negligible percentage” difference between the two main candidates. “Due to the context and the problems shown in this electoral process, it would continue to be a better option to call for a second round,” Gerardo de Icaza, OAS Director of the Department of Electoral Cooperation and Observation.

Journalist and political analyst Raul Penaranda said that many Bolivian voters have lost faith in Morales, in government institutions, and in the electoral process. Meanwhile, Morales is trying to snatch a first-round victory, and the opposition is insisting on a runoff.

“Morales is trying to avoid at all costs a second round,” Penaranda told Al Jazeera.

“He is very afraid of a second round, because he is going to lose.”

WHO says coronavirus ‘natural in origin’