Bolivia’s President Evo Morales declared victory on Thursday in elections whose disputed results have triggered riots, a general strike and opposition accusations that the leftist leader is trying to steal a fourth term in office.

Hours later, the Supreme Electoral Tribunal (TSE) on its website declared Morales the winner with 99.99 percent of the ballots counted from Sunday’s vote.

The electoral board’s final vote count gave Morales 47.07 percent of ballots compared with 36.51 percent for his challenger, Carlos Mesa, giving him the ten percentage point lead required to avoid a second round run-off.

“We won in the first round,” Morales declared at news conference earlier on Thursday.

Mesa said he would not accept the final tally and called on his supporters to continue the protests.

Tensions rose after an unexplained 24-hour halt in the release of results on Sunday night when it looked as if the election would go to a second round. The opposition has alleged fraud and Morales has accused rivals of staging a “coup.”

“They [protesters] feel that there were irregularities in that vote,” he said, adding that sentiments towards Morales started to turn sour as early as two years ago, when he lost a referendum to extend term limits on the presidency.

“He lost that referendum and he decided to run anyway. And I think from there, things have started to turn more sour.”

A spokeswoman for Bolivia’s electoral board said 0.01 percent votes were voided in the region of Beni with new voting there scheduled for November.

She added those votes were not enough to change the outcome. The president of the electoral office in Beni said a little over 500 people will vote again due to the annulments.

With the official result, Morales, already Latin America’s longest-serving president, wins a fourth term in a row, allowing him to govern the landlocked South American country until 2025 – a total of 19 years.

Meanwhile, the United States, Brazil, Argentina and Colombia joined in calling for Bolivia to hold a runoff between the incumbent and his top challenger. 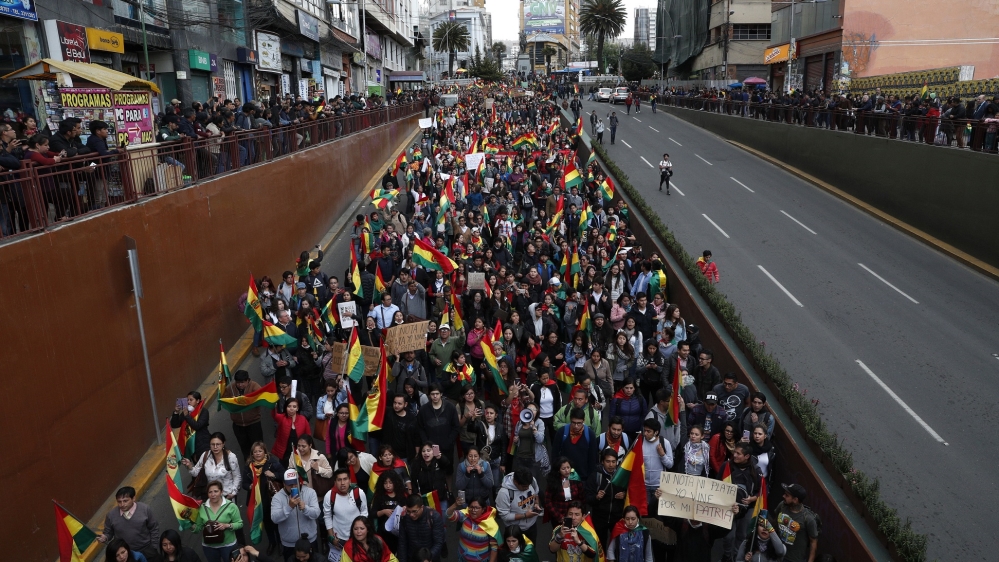 A communique issued by Colombia’s foreign ministry on behalf of the three other countries said the governments of the four nations “will only recognise results that reflect the will of the Bolivian people.”

The European Union took a similar stand, saying it backed a call by the Organization of American States for a second-round election, saying that could help Bolivia regain its footing after days of sometimes violent protests by angry opposition supporters.

“The European Union shares the OAS’ assessment that the best option would be to make a runoff to restore trust and ensure full respect for the democratic elections of the Bolivian people,” the EU said in a statement that also called for the parties to refrain from further violence.

Opposition leaders were also united in rejecting Morales’ claim of victory even as the president’s supporters were out celebrating.

Analysts have said a united opposition might stand a chance in a second round of defeating Morales, a leftist former coca-growers union leader who has governed the Andean nation for 14 years.

Flanked by other opposition leaders, Mesa read a statement calling for “citizens and social groups to remain peacefully mobilised until they obtain respect for the will of the people.”

The Andean nation has been on a knife-edge since the vote.

The opposition bastion of Santa Cruz has seen two days of a partial strike “in defence of the vote and democracy.”

Sleep allows immune cells to do maintenance work on the brain

US Supreme Court to take on Trump taxes and presidential immunity

Indians protest against progrom of Delhi Muslims in London