Serge Gnabry scored four goals as Bayern Munich humiliated Tottenham 7-2 in the Champions League on Tuesday, the first time in club history that Spurs conceded seven at home in a major competition.

Gnabry had never scored in the Champions League before netting all four of his goals in the second half, with his first two coming in a two-minute span to put Bayern 4-1 up in the 55th. He completed the rout with the final goal in the 88th, one minute after Robert Lewandowski had scored his second.

“I never dreamed I’d score four goals,” said Gnabry, who previously played for Tottenham’s archrival Arsenal. “The pressure helped. My father told me I had to play well.”

Tottenham reached the final of the Champions League last season but squandered a 2-0 lead to draw 2-2 against Olympiakos in its opening group game and again let a lead slip after Son Heung-min opened the scoring in the 12th minute.

Joshua Kimmich answered Son’s strike three minutes later, cutting inside a defender and then shooting inside the left post.

Spurs continued causing problems for Bayern’s defence, but Mauricio Pochettino’s side was to rue missed chances as the visitors gradually improved.

“We started the game really compact and aggressive, pressing hard. I think we dominated the game in the first 30 minutes,” Pochettino told BT Sport. “Unlucky that we conceded at the end of the first half, in the last minute.” 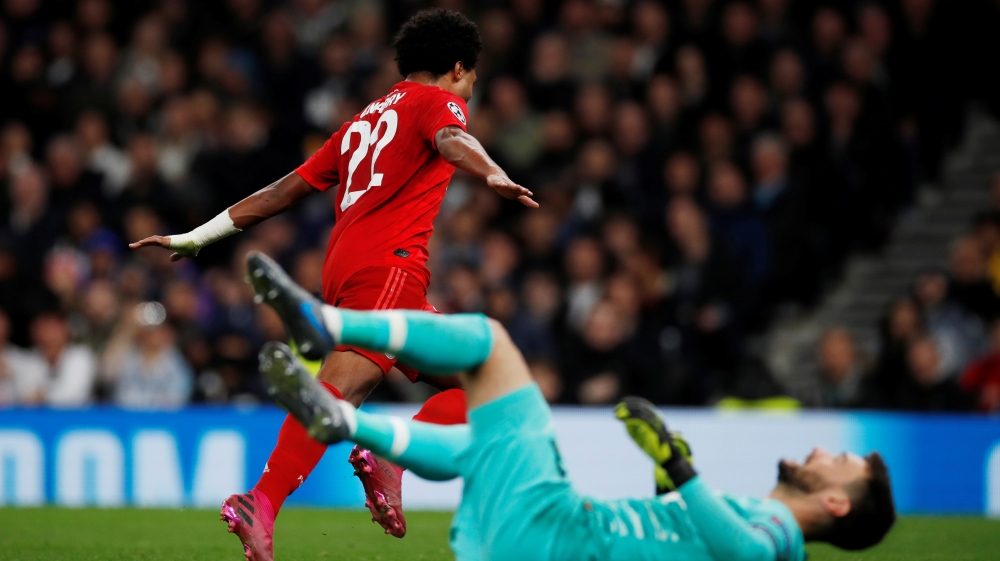 Lewandowski, already the scorer of 10 goals in six Bundesliga games this season, turned sharply and finished smartly to put Bayern in front just before the break.

Gnabry then got off the mark in the 53rd after going past a number of Spurs defenders, adding another within two minutes.

Harry Kane pulled one back from the penalty spot in the 61st after Kingsley Coman was penalised for a foul on Danny Rose.

But Gnabry ended any hopes Tottenham had of a comeback when he completed his hat trick in the 83rd, then scored another for good measure after Lewandowski claimed Bayern’s sixth.

“They were very clinical. We had some chances to score the third and be in the game,” Pochettino said.

The Argentine coach called for unity, though the result is sure to exacerbate the concerns over his leadership after a rocky start in the Premier League and elimination from the English League Cup by fourth-tier Colchester last week.

“We have to stay together and be strong in our mentality,” Pochettino said.

It was the biggest margin of defeat suffered at home by an English team in European competition, and the first time any had conceded seven goals since Spurs lost 8-0 at Cologne in the Intertoto Cup in 1995.

“We thought it would be a close game. But we’re happy with how it worked out,” Bayern goalkeeper Manuel Neuer said.

Red Star Belgrade defeated Olympiakos 3-1 in the other Group B game. Bayern is top with six points and Tottenham last with just one point.

North Korea fires projectiles, after agreeing to US talks

Prince Harry’s life in self-isolation will leave you gushing