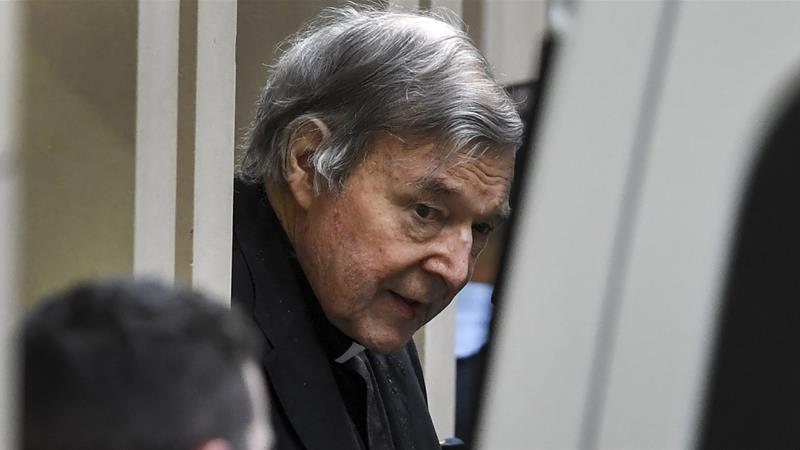 Disgraced Catholic Cardinal George Pell was sent back to jail on Wednesday after an Australian court rejected his landmark appeal against convictions for child sex abuse.

Once the Vatican’s third-ranking official, 78-year-old Pell will continue his six-year sentence for sexually assaulting two 13-year-old choirboys at a Melbourne cathedral in the 1990s.

Pell wore a dark suit and occasionally bowed his head as Chief Justice Anne Ferguson read the ruling and cheers rippled into the courtroom from a large crowd gathered outside.

Ferguson said that Pell would be eligible for parole in three years and eight months, although the Cardinal could yet ask Australia’s High Court to hear a further appeal.

Pell is the world’s most senior Catholic convicted of child sex abuse, making his case and Wednesday’s ruling a touchstone moment for believers and victims groups around the world.

He previously helped elect Popes, ran the Vatican finances and was involved in the Australian church’s response to child sex abuse claims.

“For many survivors a conviction being upheld against a high profile, once-powerful perpetrator underlines faith in the justice process and the possibility of speaking out,” said Pam Stavropoulos of Australia’s Blue Knot Foundation, a child victims’ group.

Pell’s lawyers had raised 13 objections to his convictions, casting doubt on everything from the physical possibility of Pell removing his robes to orally rape a boy, to the credibility of the main witness.

The case was unusual in that it relied heavily on the closed-door testimony of the sole surviving victim.

Two of the three judges described the victim as a “very compelling witness” who “was clearly not a liar, was not a fantasist and was a witness of truth.”

A lawyer for the father of the second victim — who died of a drug overdose in 2014 — said he felt “a weight had been lifted.”

“He feels that justice has been delivered today. He has a real sense of relief that George Pell is behind bars tonight,” Lisa Flynn told AFP news agency.

In an interview with Al Jazeera, Clare Leaney, CEO of In Good Faith Foundation, a charity and support service for religious institutional abuse survivors, said the court decision gives victims assurance that “justice is a possibility”.

She said that one of Pell’s victims is now hoping that the Vatican will remove Pell from his priestly duties.

She also urged all priests to “do whatever they can” and report to authorities any form of sex abuse.

“Many survivors are looking to the church to actively engage in child protection,” Leaney said.

His lawyers argued they should have been allowed to show an animated reconstruction of peoples’ movements in the cathedral on the days of the assaults.

They also took issue with the fact that Pell was not arraigned in the presence of the jury. The process was completed via video link so the large pool of potential jurors was able to watch.

Pell had already faced two juries, after his first trial in 2018 ended in a hung jury.

He said the “courts had done their job” and indicated Pell would be stripped of his Order of Australia honour.

During Pell’s trial under the court-ordered veil of secrecy, the Vatican gradually removed him from top Church bodies with little explanation.

Shortly after his conviction, Pell was removed from the so-called C9 Council of Cardinals that are effectively the Pope’s cabinet and inner circle of advisers.

The Vatican dropped him as the Church’s finance chief and opened its own probe into his actions after his conviction was made public in February.

US is leading the world in confirmed coronavirus cases; here’s why

Current virus pandemic can make outbreak in Britain by far the deadliest in Europe: Study