Beirut, Lebanon –Protesters have continued to block roads across Lebanon on the seventh day of mass protests, refusing to leave the streets until the government steps down.

Clashes broke out on Wednesday after the Lebanese army tried to forcibly open a key road at the Jal el-Dib bridge on the northern outskirts of the capital, Beirut. Two people were reportedly injured.

Prime Minister Saad Hariri’s economic reforms package has failed to placate protesters, who want an overhaul of the country’s political system and an end to economic woes.

While mass protests have shaken Lebanon before, most protesters and analysts say they do not see the protests dying down any time soon.

Political scientist Michel Douaihy told Al Jazeera that it is the protests’ decentralisation that has given the movement serious momentum and has “accelerated the heat” on the government.

“For the first time ever, we have protests in the south of Lebanon, an area tightly controlled politically, protests in Bekaa, in the mountains in Tripoli,” Douaihy said.

Southern Lebanon has been a stronghold of the most powerful political group in the country, Hezbollah.

Protesters continue with roadblocks to disrupt daily life. Keeping the protests confined to only public squares, as the government wants, would stifle the momentum and allow ordinary life for the public to resume. 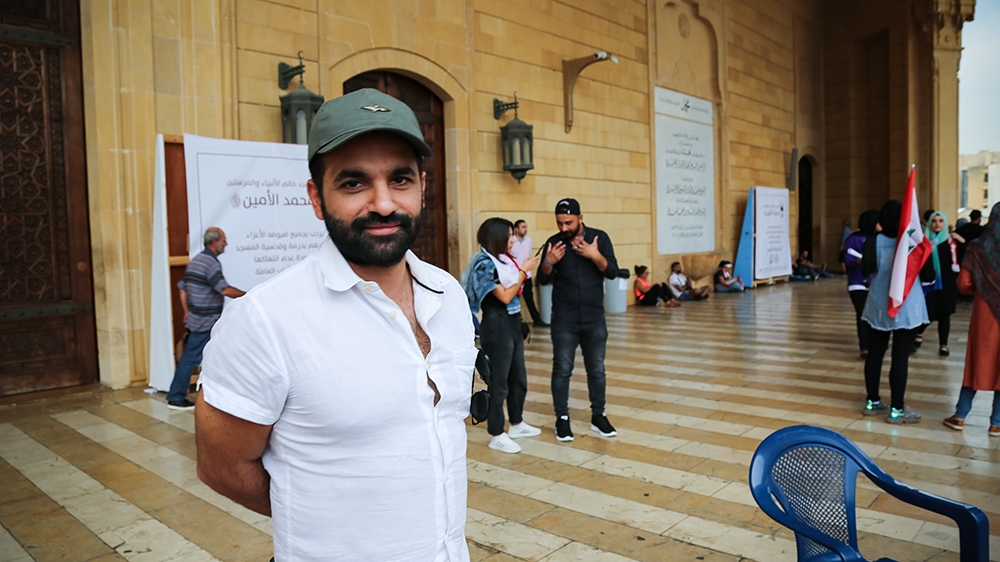 Dany al-Horr fears that if the government refuses to step down, a civil war could break out[Mersiha Gadzo/Al Jazeera]

On the streets leading to Marty’s Square and Riyad al-Solh square, in downtown Beirut, protesters have set up makeshift roadblocks using rubbish bins and containers as well as scraps of metal, wood and concrete.

Banks, schools and universities continued to be closed on the third day of the general strike until further notice.

Dany al-Horr, a protester at Marty’s Square, says this time all Lebanese are united regardless of their sects, “under the umbrella of the country”.

“There’s no need now for each one of us to protect his own sect or religion. This is nonsense. And the people just woke up to that reality,” the 39-year-old engineer told Al Jazeera.

Al-Horr has been attending the protests all day since they erupted last Thursday following the imposition of new taxes, including charges on WhatsApp calls. He says the government corruption is at “unseen levels” and the country has become unliveable.

But al-Horrfears that if the government refuses to step down, a civil war could break out.

“Civil wars begin by humiliating people. By not listening to the people, the government is making the people look as if they’re losing their dignity … people will get killed eventually if things drag on for a while,” he said. 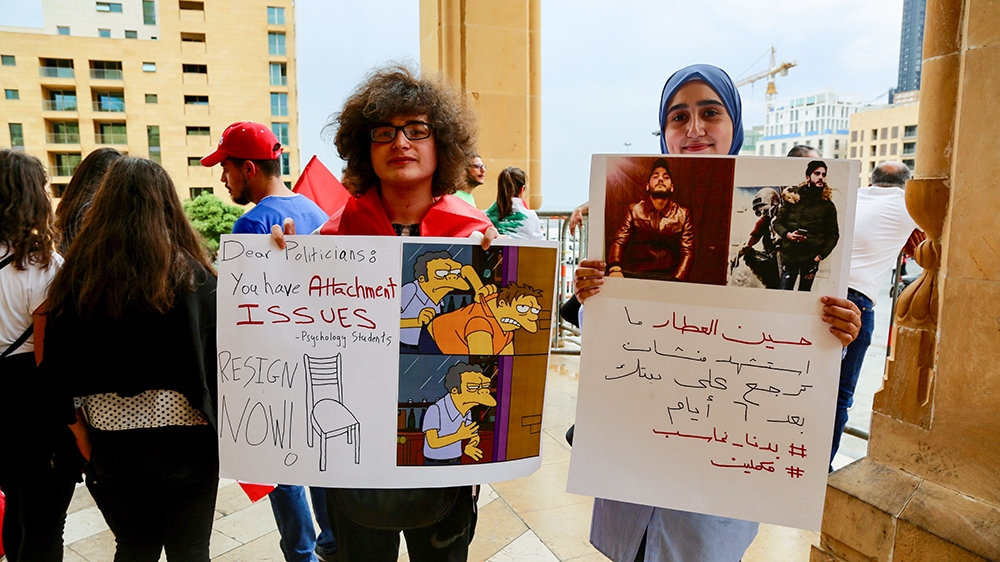 Douaihy, the Lebanese professor, sees the situation turning “chaotic” if the government does not resign as it is already unfolding into a major political crisis.

“We’ve really reached the bottom of the bottom. People are unemployed, poverty rate is exploding, people have nothing to lose. This is why I believe people won’t stop,” he said.

At Marty’s Square, 18-year-old university student Yara Kleit stands under the mosque’s roof, shielding herself from the sporadic rain, holding a sign with a picture of Hussein al-Attar, the first person to be killed in the protests.

On Saturday, al-Attar was among the protesters blocking the streets leading to the airport, when he was reportedly shot in the heart following a heated argument with another man.

The sign reads: Hussain al-Attar didn’t die for you to stay on the ground for only six days. We will continue the protests.

Kleit says she hopes for the best, but it is difficult to see Hariri resigning as other political parties, such as powerful Shia movement Hezbollah, have backed the government.

Influential Hezbollah leader Hassan Nasrallah has said calls for government resignation were “a waste of time”.

Her friend Mahmoud Alayan, 19, told Al Jazeera that if the government resigns he is afraid it may create a gap for foreign influences to try to take advantage of, referring to the influences some regional countries have in the affairs of the Mediterranean country.

“We don’t want interference from any countries especially when we’re trying to rebuild Lebanon.”

These four factors will help you understand coronavirus graphs better

Netflix ramps up global subscribers, but sees slower growth ahead