Beirut, Lebanon –Demonstrators in the Lebanese capital say their demands are “clear” and they will keep protesting until the government falls, disregarding a speech by Hezbollah’s leader who warned that the protest movement risked pushing Lebanon into “chaos” and “God forbid” civil war.

In a televised address on Friday, Hassan Nasrallah said a government resignation would create a power vacuum which could lead the country into civil unrest “similar to what’s happening in the region”.

“Under the current monetary and economic situation and the fragile political climate and all the targeting that is happening internationally and regionally, void will lead to chaos, void will lead to destruction,” Nasrallah warned, conjuring fears of Lebanon’s 15-year civil war that came to an end in 1990.

For nine days, Lebanese from across the country’s sectarian and political divides have been taking to the streets and blocking major roads to call for the resignation of the country’s sectarian power-sharing government. Angry at official corruption, a stagnant economy and poor services, they demand an overhaul of Lebanon’s political system and an end to austerity measures. 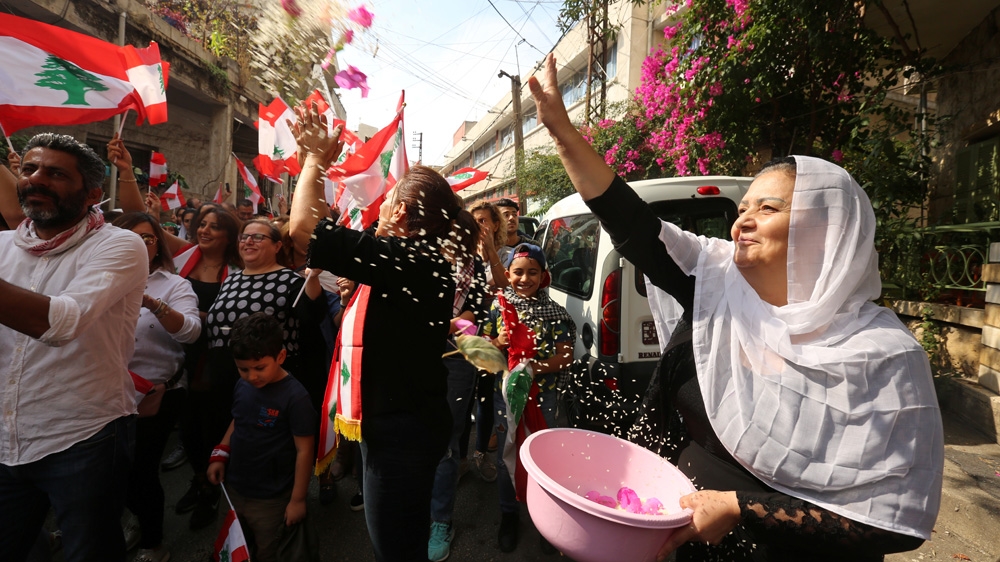 In a bid to appease the protesters, Prime Minister Saad Hariri on Monday unveiled a series of economic reforms, including no new taxes for the 2020 budget, a 50 percent reduction in the salaries of current and former politicians, the abolition of obsolete state institutions and the drafting of a law that seeks to restore public funds.

The leaderless protesters, however, rejected the announcement as insufficient and continued pouring onto the streets of the capital, Beirut, and elsewhere.

In his speech, Nasrallah hailed the reforms package, which he called “unprecedented”, and reassured the protesters that they will be implemented.

He also repeated President Michel Aoun’s call on Thursday for a dialogue and welcomed representatives of the movement to deliver a “clear set of demands”.

At Martyrs’ Square in Beirut, where various civil society groups have set up tents, protesters found Nasrallah’s speech to be irrelevant to their goal – much like Aoun’s televised statement the previous day.

“We tell him – everyone means everyone,” a Lebanese woman told Al Jazeera, preferring to stay anonymous.

The “All of them means all of them” chant has been a popular slogan since the protests began on October 17, with demonstrators insisting no politician should be exempted from resignation.

Hezbollah, seen as the strongest military and political force in the country, is part of the government that came to power last year after months of negotiations. The movement is aligned with Iran and does not accept any move that could change the status quo.

During his speech, Nasrallah also argued that while the mass protests had started off as a spontaneous movement, they had recently been hijacked.

“Lebanon has entered a stage of regional political targeting, and it is no longer just a popular movement,” he said.

Ahmad Bshennaty, a 19-year-old university student who has been participating daily in the protests, said he was not impressed by Nasrallah’s speech.

“He’s coming up with conspiracy theories just to get people to stop revolting,” Bshennaty said.

“He’s speaking to his advantage … he’s actually one of them. All of them means all of them.

“But that’s not going to stop us. We’re going to come here every single day.” 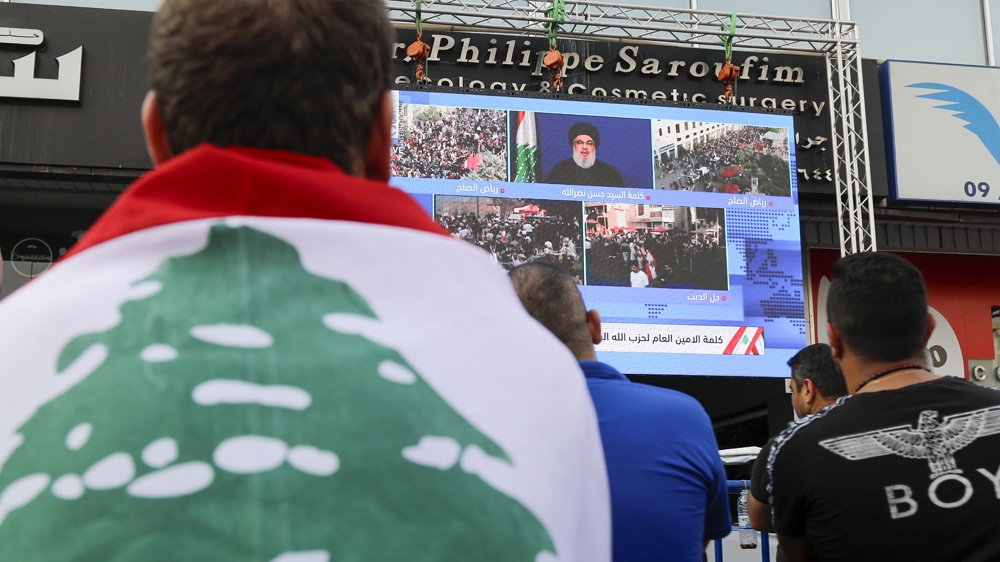 Earlier, as people looked at screens showing Nasrallah delivering his speech, many remarked that it was a Lebanese flag that was shown hanging behind him, instead of the usual Hezbollah flag, indicating his efforts to garner support and be seen as a leader of all of Lebanon.

Protests have mostly been peaceful, but on Friday, Hezbollah supporters and anti-government protesters clashed at Riyad al-Solh square in Beirut.

Hezbollah supporters shouted “Nasrallah is more honourable than all of them” and “Riad Salameh is a thief” referring to the central bank governor.

Some threw stones and sticks while others reported being hit by men. Riot police had to intervene to prevent it from turning violent. Similar clashes occurred on Thursday evening at the same square.

While Nasrallah urged his supporters to leave the streets, many protesters appeared wary that there may be more altercations. 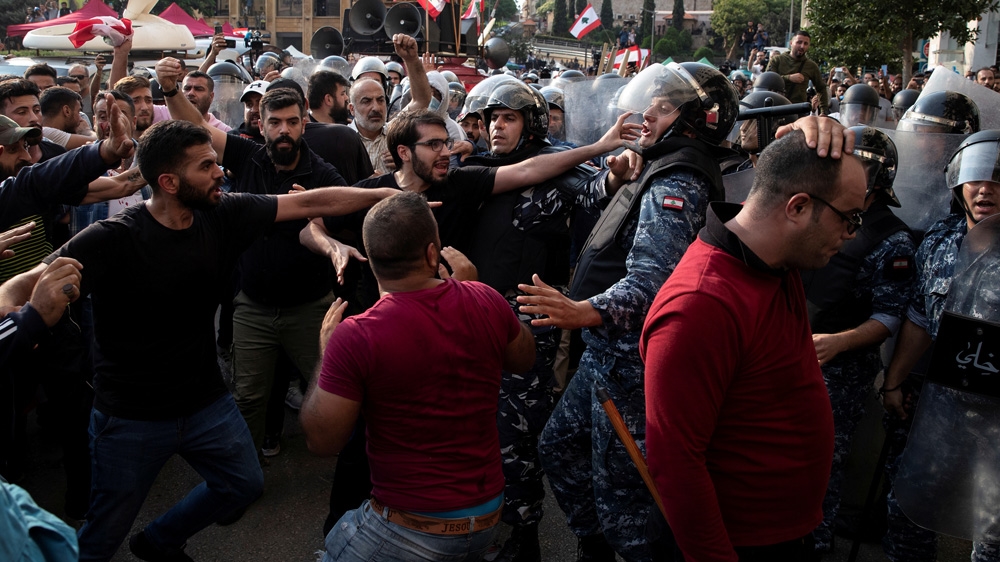 As a group of Lebanese physicians marched past the square in their white medical coats and waving Lebanese flags, Ghana Zaghayar, 21 from Btekhnay, Mount Lebanon sat underneath a tent with her friends.

She told Al Jazeera that she feared that if the situation dragged on, a civil war could indeed break out.

“A war could start between the Lebanese, between different religious groups. This is what I’m afraid of,” Zaghayar said.

“We don’t know. We don’t know where we’re going. We just want to live in our country with our dignity.”

Nasrallah’s message did little to address their concerns, she said, noting the expensive cost for education and healthcare which many people cannot afford.

“But Lebanon isn’t poor. The government robbed Lebanon. They stole the money from us and diverted it to Swiss banks,” Zaghayar said.

“We want to live in dignity in our country. We demand our minimum rights – education and medical. We want to bring back our looted money,” adding that the protesters will leave the streets until their demands are satisfied.

Chile unrest: ‘These protests will last until Pinera resigns’

Taliban attacks second Afghan city as talks with US wrap up