People of Afghanistan will head to the polls on Saturday to pick their next president, even as the threat of violence and concerns over electoral fraud could lead many to stay home.

The vote, the fourth since the Taliban’s removal from power by a United States-led coalition in 2001, comes as heavy fighting between the armed group and government forces has led to a spike in the number of civilians killed.

The Taliban has already threatened to target election rallies and polling stations, while in recent weeks the US-backed Afghan forces have stepped up air and ground attacks, raising fears of further casualties.

Meanwhile, the prospects for peace after almost two decades of war were dealt another blow earlier this month when the US abruptly ended its year-long negotiations with the Taliban.

Against this gloomy backdrop, voters in Afghanistan appear to be divided on whether to cast their ballots in Saturday’s presidential election.

Here are five key things to know about the vote. 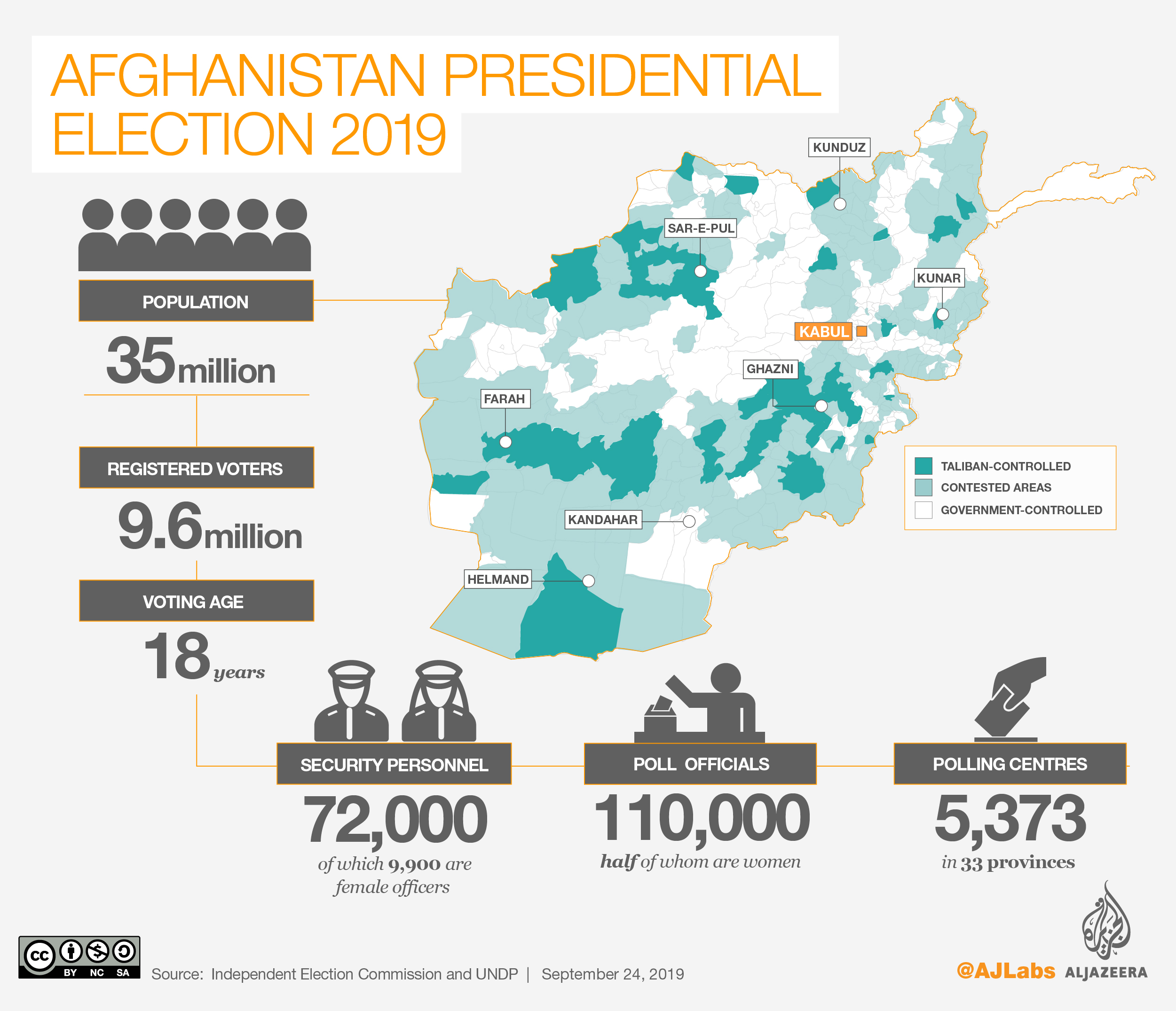 1. Peace talks, government and the Taliban

US officials and Taliban representatives kicked off peace negotiations in Qatar in October 2018 focusing on four main issues: a Taliban guarantee that it will not allow foreign armed groups and fighters to use Afghanistan as a launchpad to conduct attacks outside the country; the complete withdrawal of US and  NATO forces; an intra-Afghan dialogue; and a permanent ceasefire.

Following the completion of the ninth round of talks in late August, both sides said an agreement was near.

But in a sudden move in early September, US President Donald Trump declared the peace talks “dead”, citing a Taliban-claimed deadly attack in Kabul for his decision. Trump also said he had called off separate secret meetings planned with the Taliban and Afghan President Ashraf Ghani at his Camp David presidential retreat.

Following Trump’s move, the Afghan government issued a statement praising the “sincere efforts of its allies” and expressed its commitment to work with the US to “bring peace”.

The government, which was sidelined in the US-Taliban talks, had long asked the group to come to the negotiating table. It now says it will only consider holding talks with the Taliban after the elections.

2. Who are the candidates?

Sixteen candidates are running in Saturday’s election, seeking to secure a five-year term.

The president is both the head of state and the commander-in-chief of the Afghan armed forces. The president also appoints the cabinet, which is approved by the lower house of parliament.

Wolesi Jirga, the most powerful of the houses, is responsible for passing and amending legislation. Meshrano Jirga has an advisory role.

A presidential candidate must secure 50 percent of the vote to win outright. If, as expected, that threshold is not crossed, a runoff will be held between the top two contenders – most likely on November 23.

Listed below are the top five candidates.

Ashraf Ghani: The incumbent president is seeking a second term, running under the slogan of “Dawlat Saaz” or State Builder.

The ethnic Pashtun politician has picked Amrullah Saleh, a former spy chief who is ethnic Tajik, the second-largest ethnic group in the country, as one of his two running mates. The other one is Sarwar Danish, who is an ethnic Hazara and one of Afghanistan’s two vice presidents.

Abdullah Abdullah:Afghanistan’s chief executive officer, a post created after the 2014 presidential election, has emerged as Ghani’s strongest challenger. He campaigns motto is Stability and Integration.

Abdullah’s first running mate is Enayatullah Babur Farahmand, an ethnic Uzbek and an ally of Vice President Abdul Rashid Dostum. His second running mate is Asadullah Sadati, a Hazara who is backed by a faction of the Hazara-dominated Hezb-e Wahdat party.

Ahmad Wali Massoud: The younger brother offormer anti-Soviet and anti-Taliban commander Ahmad Shah Massoud, Wali Massoud is ethnic Tajik and has served as the Afghan ambassador to the United Kingdom.

Massoud has chosen Farida Momand, a Pashtun who was a higher education minister, and Latif Nazari, a Hazara, as his running mates.

Nicknamed the “butcher of Kabul”, Hekmatyar is believed to be responsible for the killing of thousands of civilians in Kabul during the Afghan civil war in the 1990s.

In 2016, Hekmatyar was pardoned by the Afghan government as part of a peace deal with Hezb-i-Islami. He returned to Kabul in May 2017 after spending two decades in hiding.

Abdul Latif Pedram: An ethnic Tajik, Pedram is a member of parliament who campaigned for women’s rights and federalism.

He is the leader of the National Congress Party of Afghanistan. His running mates are Ehsanullah Haidari, a Hazara, and Mohammed Sadeq Wardak, a Pashtun.

Nabil is the two-time head of Afghanistan’s spy agency, the National Directorate of Security, who is a staunch opponent of the Taliban and a critic of Ghani’s administration. 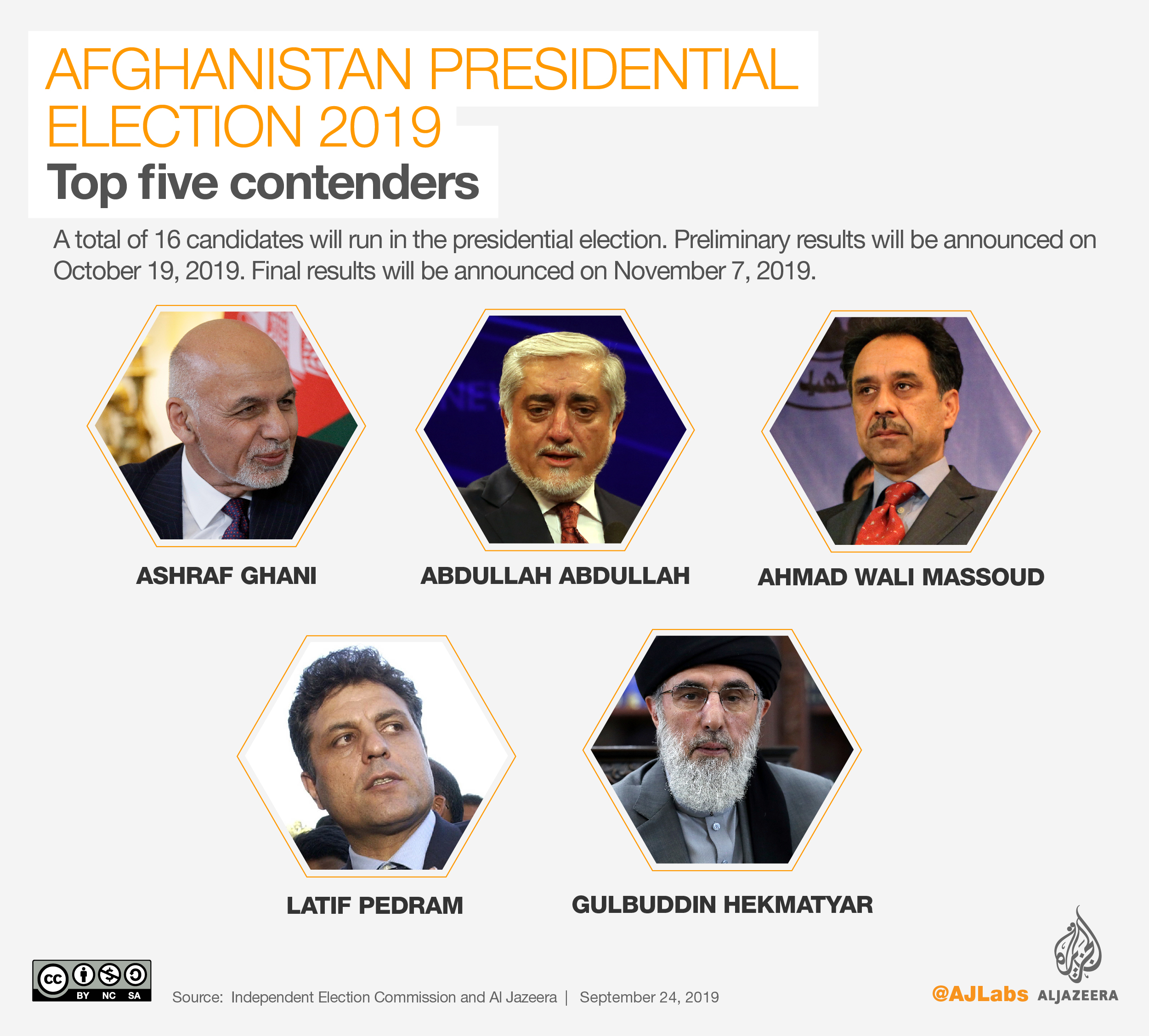 3. Why does the Taliban threaten to target the vote?

Denouncing the vote as a “sham”, the Taliban pledged in a statement on August 6 to disrupt the election process. It warned Afghans to avoid “electoral offices, voting booths, rallies and campaigns”.

The Taliban has been waging a war demanding the withdrawal of foreign troops from the country following their overthrow in 2001.

In 2004, after the adoption of a new constitution, Hamid Karzai became Afghanistan’s first-ever democratically elected president.

Since then, the Taliban has condemned the government in Kabul, calling it a “puppet regime”. The group says any engagement with the government will grant it legitimacy and believes that elections will continue the US’s dominance of Afghanistan.

On September 17, the Taliban attacked Ghani’s campaign rally in Parwan, killing at least 26 civilians and wounding more than 40.

In a statement last week, Human Rights Watch (HRW) called on the group to immediately cease such attacks.

“Taliban attacks on political rallies and other election events are part of an apparent campaign to sow fear, undermine the electoral process, and deny Afghans the right to participate in political life,” said Patricia Gossman, associate Asia director at HRW.

During that period, voters could register for the first time, as well as correct or update their information.

According to the IEC, some 9.5 million people aged 18 and older have registered to vote.

Authorities plan to use a sophisticated biometric voter-identification system that includes fingerprint, eye and facial recognitionon the voting day.

5. What is being done to ensure security?

The IEC announced earlier this month that the delivery of election materials to polling centres in the country’s 33 provinces had been completed.

It was previously estimated that 7,385 polling stations would be open on election day, but the figure was later lowered to 5,373 due to security concerns.

Of those, some 400 to 500 centres are either in areas controlled by the Taliban or under high threat, according to the IEC.

The Ministry of Interior announced earlier this month that over 72,000 security personnel would be deployed to provide security to 49,402 polling booths across the country.

“There are also about 20,000 to 30,000 members of reserve forces. Sensitive and non-sensitive election materials have been dispatched to the provinces,”ministry spokesman Nusrat Rahimi was quoted as saying by TOLOnews.

“So we want to assure the people, the commission, and the candidates that security will be provided during the election.”

Still, there are growing concerns over insecurity and questions about the transparency of the vote.

Candidates have also accusedGhani of using government resources to boost his election campaign.

Last year’s parliamentary election in October saw efforts to train staff to use a biometric identification system in a bid to reduce electoral fraud.

But following the election, complaints emerged about bribes offered to officials, rigged vote counts and buying votes emerged after the elections, which resulted in the sacking and indictment of election fraud of 12 members of the election body.

With security also a big worry, many Afghans might not vote, and a low turnout could result in a weak mandate for the winner.

“Security threads are set for a serious upsurge shaping the potential for security conditions to become much more volatile by e-day [election day],” the Transparent Election Foundation of Afghanistan, a Kabul-based organisation that monitors elections, said recently.

Los Angeles mayor reacts to Trump administration warning, says he will not be ‘pushed by politics’

George Floyd protests continue to rage on in US cities