Polls have closed in Afghanistan’s presidential election, the fourth since the fall of the Taliban in 2001.

Incumbent President Ashraf Ghani is seen as the frontrunner in the 14-man race, with Abdullah Abdullah, the country’s chief executive, considered his main rival.

Security forces are on high alert due to threats from the Taliban to attack polling stations.

Here are all the latest updates:

Polls closed in Afghanistan’s presidential election amid widespread complaints of irregularities and violence in parts of the country.

Voters complained that lists were incomplete or missing and biometric identification machines intended to reduce fraud were not working properly or people were not adequately trained on how to use them.

“I couldn’t vote because the voting sticker I have on my ID is not registered in the polling station I went to. This happened to so many different people. This sticker was put on my ID in Abdul Shukoor Reshad High School by the election commission themselves.”

Preliminary results are not expected before October 17 and final results not until November 7. If no candidate gets 51 percent of the vote, a second round will be held between the two leading candidates

First time voter: ‘I want to see a peaceful Afghanistan’ 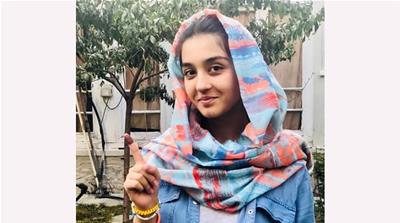 Najmia Popal, 18, headed to a polling centre in Kabul with her mother to cast a ballot for the first time.

“It was my first time and I was excited,” she told Al Jazeera.

“I voted because I want to see a peaceful Afghanistan, a place with no more terrorist attacks, no more bomb-blasts.

“I want to live in a secure country, something new and great, I hope that it happens. Long live Afghanistan!”

Voter turnout was low in certain parts of Afghanistan amid lingering concerns over security threats and logistical challenges.

“In the city of Jalalabad [the capital of Nangarhar provincial], the turnout was low in the morning, until at least 10am. In the districts there are also fewer people than in previous elections,” Nabiullah Baz, a member of parliament from the district of Chapliyar, told Al Jazeera.

“As the hours passed, I started to see more mobilisation among the people – hopefully, as the day goes on, more people will come out especially, as the heat starts to settle.”

“In all of the polling centres I went to, the turnout has been extremely low. Even when compared to the parliamentary elections in [October] 2018”. 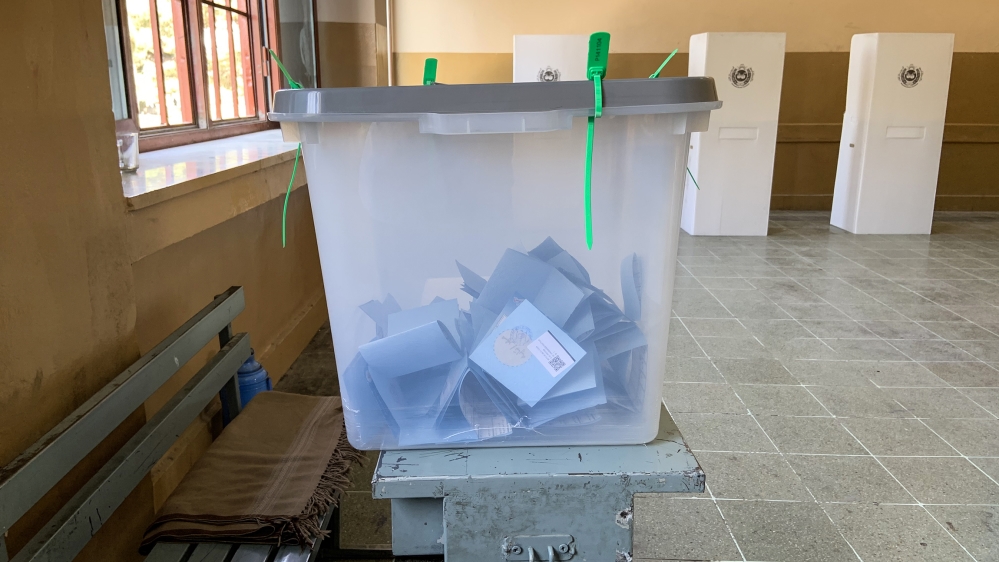 Voters across Afghanistan cast their ballots

Check out our photo gallery

“There was always a contingency for the polling stations to be open to facilitate the last-minute surge of people coming in to vote,” Al Jazeera’s Rob McBride reported from Kabul.

“They were due to be closed by now but they happen to be open for further two hours – it does seem as though it is giving people in other parts of Afghanistan a chance to vote if they have not already voted.”

Afghanistan’s Independent Election Commission (IEC) said it had lost contact with 901 of the country’s 5,373 polling centres.

Habib-Ur-Rahman Nang, head of the IEC secretariat, said the commission was not able to communicate with polling centres in the provinces of Badakhshan, Takhar, Kunduz and Baghlan, where telecom services were not active, local media TOLO News reported.

‘Trying to take my vote’ 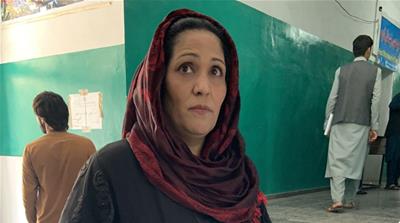 A voter named Shahla said electoral workers at Naderia High School in Kabul’s Kartei Parwan neighbourhood refused her permission to cast her ballot because the system showed she had already voted.

“I’ve voted here before with the same ID. If I had already voted once today, why isn’t my finger marked with ink?”

“I’m not illiterate, why would I do such a thing? They are trying to take my vote with a ridiculous, baseless claim,” Shahla told Al Jazeera, expressing her anger and disappointment.

‘In and out very quickly’

Mustafa Azizi said he did not face any problems voting at a school at Chelsetoon, in west Kabul. 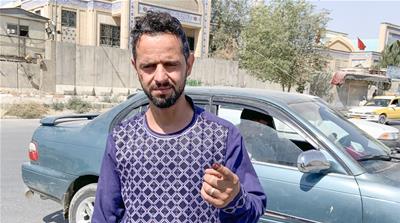 “Everything was orderly, I was in and out very quickly,” he said.

“I didn’t see anyone complaining but I’ve heard reports of issues at [Kabul’s] Habibia [area].”

Dozens of people were turned away or had to wait for hours to vote at Kandahar’s Sayeed Jamaluddin High School due to problems with two biometric devices, according to reports.

Some 600 people were registered at this centre.

Ghani cast his ballot in Kabul, hailing the election as a sign of strengthening democracy in Afghanistan.

“It is a moment of pride for me that a major part of the election expenses have been paid by the Afghan government,” he said.

Ghani also stressed the need for fairness and urged election observers to monitor the process. 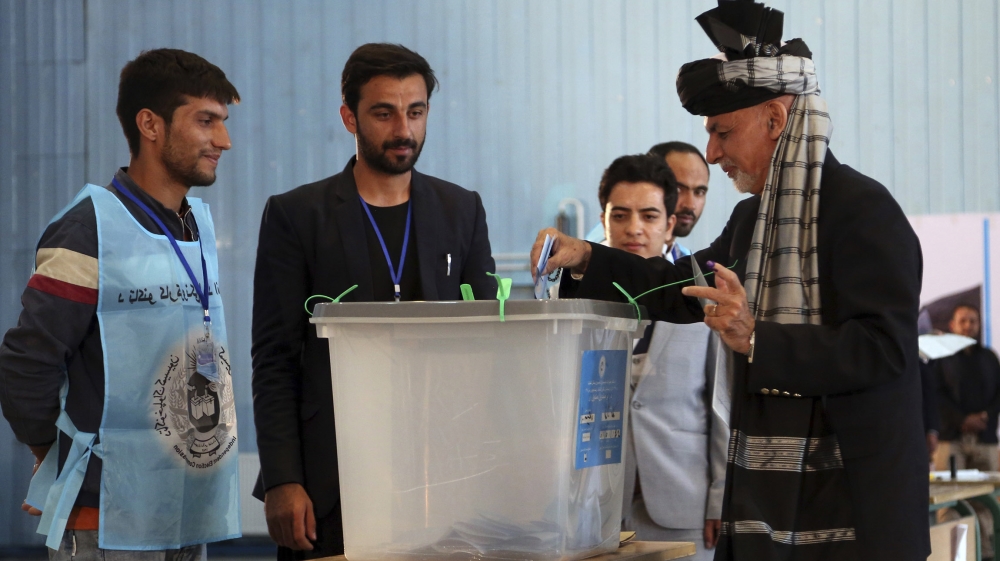 Independent Election Commission staff showed up late at a polling station in Kabul’s Herati Masjed, delaying the voting process by almost an hour. 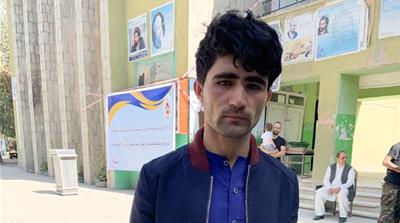 At least four people were turned away after voting started amid problems with voters’ names appearing in the electoral roll.

“The IEC is hiring incapable, illiterate people, this is why it’s happening,” Shah Bolbol, who waited for three hours to vote, told Al Jazeera.

He was asked to go to the IEC offices as his name did not appear on the voter list.

However, others were able to vote without any problems.

“The services were good, the security was good. I was very happy to go and vote. No one was afraid,” Mohammed Wahid, a Kabul resident, told Al Jazeera.

Reporting from a polling station in Kabul at 10am local time, Al Jazeera’s Tony Birtley said the turnout appeared to be low compared with the 2014 presidential polls.

“Five years ago, when presidential elections were held there were lines of people here and now I have barely seen 200 people who have voted here in the last two hours,” he said.

“It’s either because of the security situation or because people here become very disillusioned with the political situation. Five years ago, they were promised big changes, such as the economy and security will be improved, but none of that happened. So people here think if they vote it’s going to be more of the same.”

Birtley said there were reports of explosions in Kandahar and in the north of Kabul, while a mortar was reportedly fired in Helmand province.

At least 17 people were wounded when a bomb exploded outside a polling station in the southern city of Kandahar, a hospital official said, hours after the polls opened.

Naimatullah, the head of a regional hospital who only has one name, told AFP news agency that “15 people – all men – were injured and were brought to the hospital”.

Voting under way across Afghanistan

Polls opened across Afghanistan in the country’s fourth presidential election since the Taliban was removed from power in 2001 in a US-led invasion.

In the lead-up to the vote, the precarious security situation and the struggling economy seemed to be dominating voters’ concerns.

“In Afghanistan, from the moment you wake up to when you put your head down to sleep, you are in danger,” Kabul resident Farooq Saidzada said.

All you need to know about the polls

Who are the candidates? What are the main issues? What is being done to ensure security?

Go here to find out the answers to these questions – and much more.

US delivers truckloads to terrorists in Syria