During the official family photo,Mohammed bin Salman (MBS), who faced allegations of ordering the October 2, 2018, killing, stood at the far edge of the group portrait. Largely ignored by the leaders of the world’s largest economies, he exited the stage quickly afterwards, without stopping to speak to the others. “Saudi Crown Prince sidelined in G20 family photo”, “A bro-shake with Putin, a talking-to from Macron: The Saudi prince’s less-than-royal treatment at the G-20”, read some of the headlines after the November summit.

The leaders of France, Canada and the United Kingdom, meanwhile, said they pressed for an investigation into Khashoggi’s killing during their separate meetings with Prince Mohammed, who denies any knowledge of the murder.

But when the same G20 leaders gathered in Japan’s Osaka in June, things appeared different. This time, Prince Mohammed stood front and centre in the family photo, sandwiched between Japanese Prime Minister Shinzo Abe and US President Donald Trump, who at a personal breakfast earlier, congratulated the crown prince for doing a “spectacular job” in “opening up” Saudi Arabia and fighting “terrorism”.

Remembering Jamal Khashoggi – the prominent Saudi journalist whose 30-year career came to an end when he was killed in the Saudi consulate in Istanbul. pic.twitter.com/zulzY4NrTX

The US president has not been the only leader to have heaped praise on Prince Mohammed over the past year. During a February visit to Pakistan as part of an Asia tour that included stops in China and India, Prince Mohammed was given Pakistan’s highest civilian honour after signing investment deals worth $20bn.

Meanwhile, Saudi Arabia is scheduled to host next year’s G20 summit, and this month it is stepping up preparations for its annual “Davos in the Desert” summit, a high-profile investment conference that last October was shunned by many business leaders amid the global outcry over Khashoggi’s murder.

This year, however, business heavy hitters are expected to return to Riyadh, with the list of attendees also reportedly including Jared Kushner, Trump’s son-in-law and a senior White House adviser.

“There is an undeniable risk that with big events scheduled to take place in Saudi Arabia in 2020, such as the G20 summit and the famous Dakar Rally, state-to-state relations could normalise,” 19 organisations that include Amnesty International and the Index on Censorship said in a joint statement on Tuesday.

The “return of business as usual would mean Khashoggi died in vain”, the groups said, “and there is little hope for hundreds of other unlawfully disappeared, detained, tortured or executed activists whose cases failed to attract similar levels of international attention”. 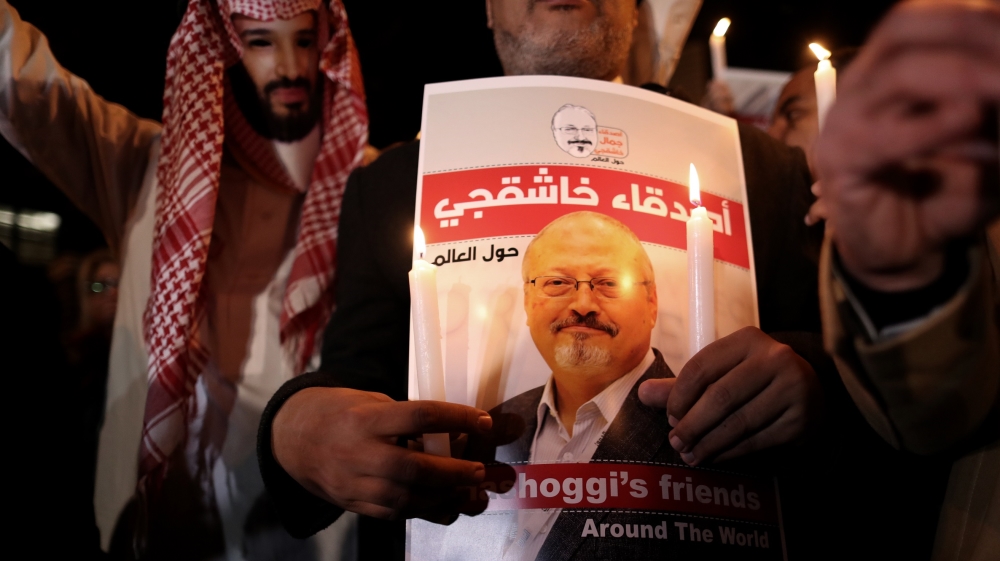 Khashoggi was killed and dismembered inside the Saudi consulate a year ago [File: Erdem Sahin/EPA]

Bessma Momani, professor of political science at the University of Waterloo in Canada, said world leaders have given Prince Mohammed “a pass”, despite incriminating evidence linking him to Khashoggi’s killing.

She was referring to a June report by a United Nations expert that said it found “credible evidence” warranting further investigation of the crown prince’s liability for the killing.

The inquiry by Agnes Callamard, UN special rapporteur on extrajudicial killings, said Khashoggi was the victim of “deliberate, premeditated execution” for which Saudi Arabia bore responsibility. Her report backed Turkish intelligence reports that a 15-member hit squad comprising of senior Saudi agents killed and dismembered Khashoggi inside the consulate. Many of Khashoggi’s killers were close aides to the crown prince, the inquiry found.

Yet, “not only is he (the crown prince) being welcomed to international events, he continues to have many face-to-face meetings with world leaders, including those from liberal democracies,” Momani said.

Prince Mohammed’s successful comeback bid is a testament to Saudi Arabia’s clout on the global stage as the world’s top oil producer and arms importer, she added, referring to the kingdom’s multibillion-dollar defence contracts with Western countries.

Trump, announcing his decision in November last year to “stand with Saudi Arabia”, touted Riyadh’s import of US weapons, as well as its support of Washington’s policies on Iran and Syria.

The decision not to take punitive measures against Saudi Arabia for Khashoggi’s killing also reflects a rise of “nationalist-populist dictators globally”, Momani argued.

“If you’re going to censure Mohammed bin Salman, why wouldn’t you censure Xi Jinping of China, who’s got one million Muslim Uighurs in internment camps, Narendra Modi of India who’s got Muslims in Kashmir in one big open-air prison – so where do you begin the censuring?”

In addition to business and geopolitical interests, “there’s also an appreciation – whether you like it or not – for some of the economic and social reforms that Mohammed bin Salman has carried out”, Momani said, referring to the crown prince’s pledge to diversify the Saudi economy away from oil, as well as a decision to grant women the right to drive.

Still, the fallout over Khashoggi’s murder has cost Prince Mohammed and Saudi Arabia.

Germany, Denmark and Finland have banned arms sales to the kingdom, but arguably the most notable effect has been the US Congress’s stance towards Riyadh.

Despite Trump’s fervent support, the Senate in December approved a measure blaming the crown prince for Khashoggi’s killing. This year, both the House of Representatives and the Senate voted to end US military support for the Saudi-led war in Yemen – but Trump vetoed those measures.

In a Twitter post on Monday, Robert Menendez, a Democratic senator, pledged to continue the effort to hold Saudi Arabia to account. “Trump has repeatedly vetoed Congress’ efforts, but we remain undeterred,” he said.

“Khashoggi’s murder will be remembered as the straw that broke the camel’s back – a grim reminder that Saudi behaviour has strayed so far out of line with our own values that business as usual with the kingdom was no longer in our interests,” he added in an op-ed for The Washington Post.

The disappearance of Saudi journalist #JamalKhashoggi has turned the spotlight onMohammed bin Salman- whose human rights record casts a dark shadow on his reforms. pic.twitter.com/EwBSJvKjhD

Ayham Kamel, Middle East director at the Eurasia Group, said the US Congress’s stance was among the factors behind Prince Mohammed’s recent decision to take responsibility for Khashoggi’s killing. In an interview with CBS’s 60 minutes programme that aired on Sunday, just as the looming anniversary of Khashoggi’s killing began to draw attention to the case, the crown prince denied ordering the murder, but said he took “full responsibility as a leader in Saudi Arabia”.

The comments “represent a clear shift in approach in embracing the mistake that was made and promising some form of accountability,” Kamel said. “He has seen there are limitations to what he can do on the international arena, for sure.”

However, many have denounced the crown prince’s comments.

Callamard said they represented an attempt by the crown prince to exonerate himself from direct criminal responsibility in the killing, while The Washington Post’s editorial board described them as “a lie that only those wishing to excuse him will accept”.

Fred Ryan, publisher of the US newspaper, said he believed Khashoggi’s case could still be “a turning point”.

Some actions are too heinous for the public to forget, he wrote in a hopeful op-ed on Sunday. And Khashoggi’s murder “might be recorded as the moment when Saudi Arabia began to understand the consequences of its brutality, when the United States learned important lessons about standing up for its values, and when both countries rediscovered liberty, human rights and respect for the truth”.

Everything you need to know about pebble poop