A succession of women who said Jeffrey Epstein sexually abused them at a young age voiced anger and defiance in a packed New York courtroom on Tuesday, some lamenting that the financier‘ssuicide deprived them of the opportunity to obtain justice.

“The fact that I will never have a chance to face my predator in court eats away at my soul,” Jennifer Araoz said during a more than two hour hearing before US District Judge Richard Berman, who let the women testify even though Epstein’s death meant he would never face a trial.

“I will not let him win in death,” another woman, Chauntae Davies, told the court.

The dramatic statements, with the women expressing raw emotions and sometimes holding back tears, came less than three weeks after Epstein was found dead in a Manhattan jail cell where he was awaiting trial on sex trafficking charges involving dozens of girls as young as 14.

Federal prosecutors asked the judge to formally dismiss their case against Epstein because of his death but said the government’s investigation into potential co-conspirators was ongoing. 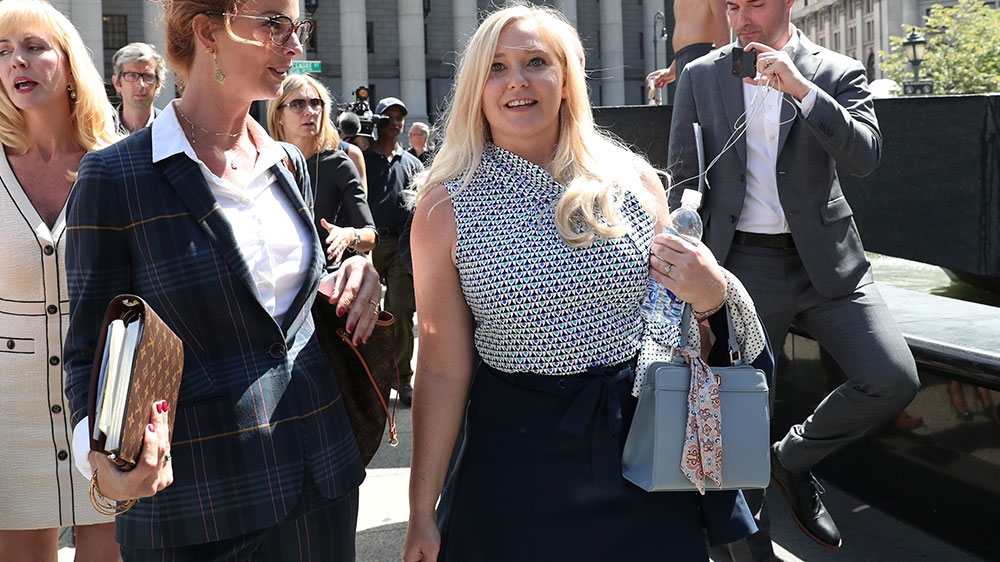 Virginia Giuffre, an alleged victim of Jeffrey Epstein, walks after the hearing in the criminal case against Epstein [Shannon Stapleton/Reuters]

One after another, the women detailed what they said were Epstein‘s actions against them years ago when they were teenagers. In all, 16 women testified, including six who did so without giving their names, and lawyers read statements from seven other women.

“He showed the world what a depraved and cowardly human being he was by taking his own life,” said Sarah Ransome, another of the women.

Ransome implored prosecutors to hold Epstein’s co-conspirators responsible, telling them, “Please, please finish what you started. We all know he did not act alone.”

Epstein, who once counted US President Donald Trump, former President Bill Clinton and Britain’s Prince Andrew as friends, was arrested on July 6 and pleaded not guilty. The wealthy 66-year-old money manager was found dead August 10 in his cell at the Metropolitan Correctional Center in Lower Manhattan. An autopsy concluded that he hanged himself.

Explaining why he gave the women and their lawyers an opportunity to address the court, the judge said it was “both because of their relevant experiences and because they should always be involved before, rather than after, the fact.” At the end of the hearing, Berman said “everyone has benefited greatly” from hearing from the women.

Prosecutors accused Epstein of arranging for girls to perform nude “massages” and other sex acts, and paying some girls to recruit others, from at least 2002 to 2005. Some of the women have publicly said Epstein raped them.

Davies told the court Epstein had hired her to give massages. She said Epstein raped her the third or fourth time they met on his private island and continued to abuse her.

Another woman, testifying without giving her name, said Epstein molested her when she was 15 at his ranch in New Mexico.

“What I remember most vividly is him explaining how beneficial the experience was for me,” she said.

Courtney Wild, who said she was sexually abused by Epstein when she was 14 in Palm Beach, Florida, said the late financier was a “coward”, and she feels “very angry and sad” that he killed himself before going to trial.

Epstein’s death has triggered investigations by the FBI, the US Justice Department’s inspector general’s office and the US Bureau of Prisons, which runs the detention facility.

Epstein’s arrest in New York came more than a decade after he avoided prosecution on similar federal charges in Florida by striking a deal enabling him to plead guilty to state prostitution charges.

That deal, widely criticised as too lenient, resulted in Epstein serving 13 months in a county jail, which he was allowed to leave during the day on work release.

At the hearing, the judge said he was obligated to dismiss the indictment.

“Dismissal of this indictment as to Jeffrey Epstein in no way prohibits or inhibits the government’s ongoing investigation into potential co-conspirators,” said Assistant US Attorney Maurene Comey, adding that prosecutors also could continue to seek forfeiture of Epstein’s assets.

Many of the women who testified said Ghislaine Maxwell, a longtime Epstein companion, helped him recruit girls and carry out his abuse.

A spokesman for federal prosecutors in Manhattan declined to confirm or deny whether Maxwell or any other specific individual is under investigation.

A lawyer for Maxwell could not immediately be reached for comment.

Two days before his death, Epstein signed a will placing all of his property, worth more than $577m, in a trust, according to a copy of the document seen by Reuters. The move could make it more difficult for accusers to get access to his riches in civil litigation.

Uber-Waymo dispute: Anthony Levandowski is in court on criminal charges

Peloton, a bike company, claims it “sells happiness” and is “so much more than a bike”