Rohingya remaining in Myanmar’s Rakhine state face a “serious risk of genocide”, UN investigators have said, warning that the repatriation of a million others already driven from the country by the army remains “impossible”.

In a damning report released on Monday, a United Nations fact-finding mission also called for top Myanmar generals, most notably army chief Min Aung Hlaing, to face trial for the killings, gang rape and arson during the Rohingya crackdown.

The mission, set up by the UN’s Human Rights Council in March 2017, doubled down on its findings published last year, in which it had labelled the 2017 crackdown as a “genocide”.

Some 600,000 Rohingya are living in “deplorable” conditions in Rakhine state, subject to restrictions on movement that touch almost every aspect of their lives, the report said.

The factors that “contributed to the killings, rapes and gang rapes, torture, forced displacement and other grave human rights violations” by the Myanmar military and other government authorities are still present, it said.

“Myanmar continues to harbour genocidal intent and the Rohingya remain under serious risk of genocide,” the investigators said in their report, due to be presented to the UN Human Rights Council in Geneva on Tuesday.

Myanmar had repeatedly denied the UN investigators’ 2018 findings and is yet to respond to the latest report.

About 740,00 Rohingya fled from Rakhine to Bangladesh following a crackdown by the government forces and other groups that began in August 2017.

The fleeing Rohingya, who alleged rape, murder and torture, joined about 300,000 Rohingya living in southern Bangladesh, which now hosts the largest refugee camp in the world.

While the predominantly Muslim Rohingya have lived in Myanmar for decades, the government views them as “illegal immigrants”. A 1982 law denied citizenship to them, effectively rendering them stateless. 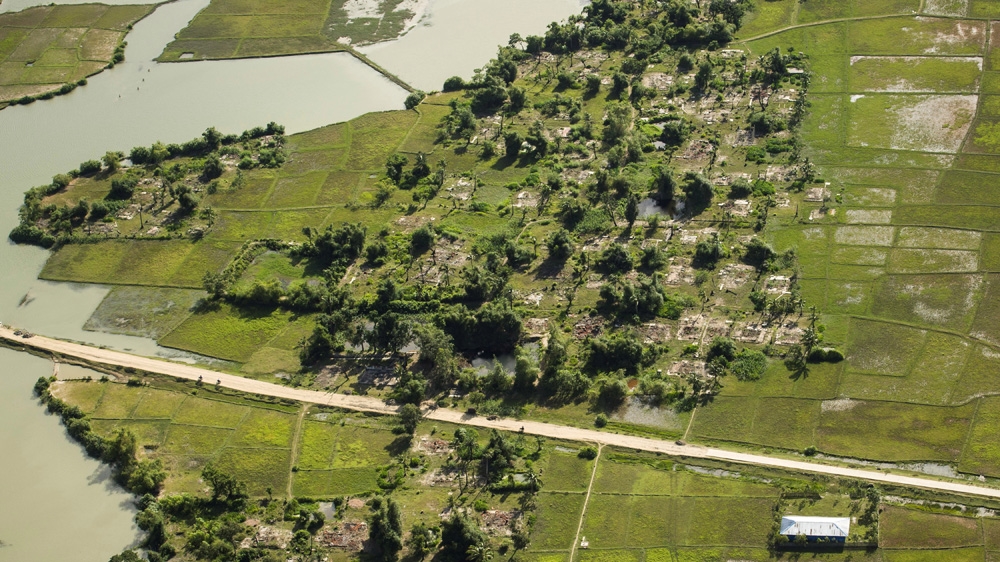 Almost 200 settlements have been nearly or completely destroyed since the crackdown began [File: Ye Aung Thu/Reuters]

The mission reiterated calls for the UN Security Council to refer Myanmar to the International Criminal Court (ICC) or to set up a tribunal, like for the former Yugoslavia and Rwanda.

It said it had a confidential list of more than 100 names, including officials, suspected of being involved in genocide, crimes against humanity and war crimes, in addition to the six generals named publicly last year.

The report also repeated calls for foreign governments and companies to sever all business ties with the military, urging a “moratorium” on investment and development assistance in Rakhine state.

The Rohingya have long been subjected to movement restrictions, making it difficult or impossible to access healthcare, work and education.

The army justified the crackdown as a means of rooting out Rohingya fighters.

UN Special Rapporteur Yanghee Lee said Myanmar had “done nothing to dismantle the system of violence and persecution”.

She pointed to satellite imagery revealing the development of “34 camps, the precise purpose of which is unclear”. “But they may be intended to detain the remaining Rohingya population and those who decide to return,” she said.

Across the border in Bangladesh, the situation for Rohingya refugees living in camps is worsening, UN human rights experts warned on Monday in a separate release.

Bangladesh and Myanmar signed a repatriation deal two years ago, but virtually no refugees have returned to date, with UN investigators describing conditions in Myanmar as “unsafe, unsustainable and impossible”.

Last month, an estimated 200,000 Rohingya held a so-called “Genocide Day” rally in Bangladesh’s Cox’s Bazar to commemorate the second anniversary of the crackdown in Myanmar.

“Accountability is important not only to victims but also to uphold the rule of law. It is also important to prevent repetition of the [Myanmar military’s] past conduct and prevent future violations,” said Radhika Coomaraswamy, a Sri Lankan lawyer and one of the mission’s three international experts.

“Instead of making biased accusations, they should go onto the ground to see the reality,” he said.

The UN fact-finding investigators have never been granted permission to enter Myanmar or access Rakhine.

“The scandal of international inaction has to end,” mission expert Christopher Sidoti said. “Unless the United Nations and the international community take effective action this time, this sad history is destined to be repeated.”

Millions of US women say first sexual experience was rape

Iraq protesters insist on system overhaul after US call for vote

Iran’s Khamenei stands by Guards after unrest over downed plane